With the GP service already on its knees, a Health Foundation report predicts the situation may yet become much worse.

Unless radical action is taken, it suggests that in ten years a quarter of all medical posts at family surgeries could be unfilled – in its worst-case scenario that rises to half.

Thanks to our rising population, the average doctor to patient ratio has already soared to one per 2,200. 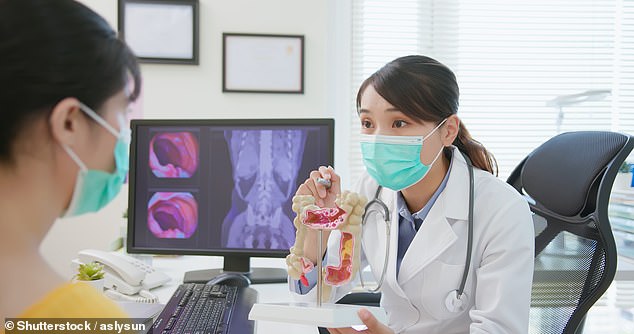 Thanks to our rising population, the average doctor to patient ratio has already soared to one per 2,200

The massive Covid backlog has put enormous pressure on face-to-face appointments, driving increasing numbers to hard-pressed A&E departments. And it’s clear that recruitment and training of new GPs is falling dangerously behind demand.

It’s time for a root-and-branch review of the primary care system, in which ministers, administrators and medics come together to formulate a blueprint for the future.

The GP surgery is the bedrock of the NHS. It is patients’ first port of call and an essential gateway to wider treatment. Right now, it is in urgent need of intensive care.

Police must be open

After the shock revelation on Tuesday that the Metropolitan Police has been placed in special measures, we now discover that five other forces are also failing.

Two – Cleveland and Greater Manchester – were known about. The other three – Gloucestershire, Staffordshire and Wiltshire – weren’t named until the Daily Mail investigated. Even now, we don’t know when or precisely why they were put into special measures, or how long they are likely to be in them.

The Inspectorate of Constabulary has done well to make clear that the performance of these forces was unacceptable and to draw up plans for improvement.

But the people they serve deserve much more transparency.

They need to know exactly what went wrong and how it will be fixed. Trust will not be restored without full disclosure.

The Mail welcomes many measures in the Government’s new bill to tackle the scourge of internet gambling addiction, which devastates personal and family lives.

Maximum stakes in online casinos limited to between £2 and £5, free bets banned and no inducements for those incurring heavy losses are all sensible and useful measures.

And while ministers have dropped plans to stop gambling firms sponsoring Premier League football shirts, they are seeking to thrash out a voluntary agreement.

But the apparent shelving of a provision forcing betting companies to fund addiction treatment is deeply disturbing.

These firms are making billions out of habitual gamblers, many of whom are sucked in to losing more than they can afford, sometimes with fatal consequences.

The least they should do is help pay for the social and psychological wreckage they leave behind.

Three times yesterday Boris Johnson declined to rule out calling a snap general election, saying he was focused on tackling the many problems this country faces.

And so he should be. We have already had far too many distractions, from Partygate to the recent no-confidence vote.

With Vladimir Putin on the march, a cost of living squeeze, a seemingly endless flood of Channel migrants and a battle looming over the Northern Ireland protocol, the PM needs all the energy he can muster.

A sapping election campaign now would stretch his stamina, Tory credibility and the voters’ patience to breaking point.

He has a majority of nearly 80 seats. If Tory rebels can park their differences and get behind him, that is more than enough to change Britain for the better.