The Fagradalsfjall volcano in south-west Iceland erupted on Wednesday afternoon (Thursday AEST), according to the Icelandic Meteorological Office, which urged people to stay away from the sparsely populated area on the Reykjanes peninsula – though some still went up close to fly drones and snap photographs with their children. Three tourists have been reportedly injured on the trek to get to the location.

“I just made it to the volcano . . . my mind is completely blown, it’s crazy,” one onlooker told the Associated Press. “The last thing that I would have imagined this morning when I woke up would be to be standing and looking at this . . . it is so beautiful.” 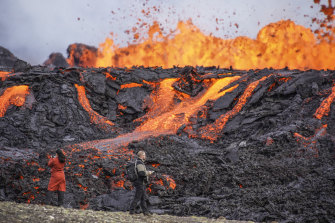 People look at the lava flowing on Fagradalsfjall volcano in Iceland. Credit:AP

Another man who had flocked to see the same volcano erupt last year said it was “absolutely incredible,” describing the lava as a mesmerising “dancing fire”.

The eruption, classified as a volcanic fissure, is occurring about 16 kilometres from Keflavik International Airport and about 30km from the country’s capital, Reykjavik.

A “code red” was declared to prohibit aeroplanes from flying over the site, although helicopters were sent in to survey the situation, Reuters reported.

“Currently, there have been no disruptions to flights to and from Iceland and international flight corridors remain open,” the Foreign Ministry said in a statement. 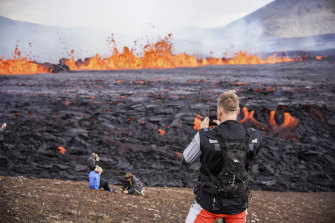 The hike to the site of Fagradalsfjall volcano involves walking over terrain that may still be hot or unstable. Credit:AP

International travellers will recall the eruption of the country’s Eyjafjallajokull volcano, which spewed huge ash clouds into the atmosphere in 2010, grounding air traffic and leaving millions stranded.

“What we know so far is that the eruption does not pose any risk to populated areas or critical infrastructure,” Icelandic Prime Minister Katrin Jakobsdottir said in a statement. “We will, of course, continue to monitor the situation closely.”

A volcanic fissure does not usually result in large explosions or significant dispersal of ash into the stratosphere. But people were warned to stay away because of the risk from noxious fumes and hot magma.

“The eruption follows intense seismic activity over the past few days,” the Foreign Ministry said. “It is considered to be relatively small.”

The exact location of the eruption is in Meradalir, about a kilometre north of Mt Stori-Hrutur, according to the Icelandic Meteorological Office.

The area has experienced “strong earthquakes” in recent days, it added, warning of tremors, falling rocks and gas pollution. The same volcano also erupted last year, it said, an eruption that lasted about six months. 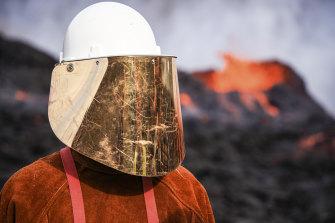 A person wears protective gear while standing close to the lava flowing from Fagradalsfjall volcano in Iceland on Wednesday.Credit:AP

Volcanoes are a fact of life in Iceland, a country that sits atop the Mid-Atlantic Ridge, caused by the separation of the North American and Eurasian tectonic plates. On average, the country experiences a volcanic event about every four years.

However, the same geological activity is also responsible for some of the country’s most dramatic natural features, such as black sand beaches and geothermal lagoons, which draw millions of foreign tourists.

The current volcanic response is being led by the Department of Civil Protection and Emergency Management alongside the Meteorological Office and University of Iceland. Scientists are also in the area with Coast Guard helicopters to assess the situation, the government said.