Omicron will make up HALF of Europe’s Covid cases ‘within the next few months’, EU health agency warns

Omicron cases will make up half of all infections in Europe within months, the EU’s health body has warned today as it sounded the alarm over the Covid variant.

Scientists from the European Centre for Disease control ranked the danger posed by the variant as ‘high to very high’ in their first situation report issued since Omicron was discovered in southern Africa last week.

Early data suggests Omicron may cause a ‘significant’ reduction in the effectiveness of vaccines and poses ‘increased’ risk of reinfection to those who have already the disease, their report says.

The variant has so-far been discovered in 13 EU countries and the UK, and while most have been in travellers from Africa there have been cases of community spread. 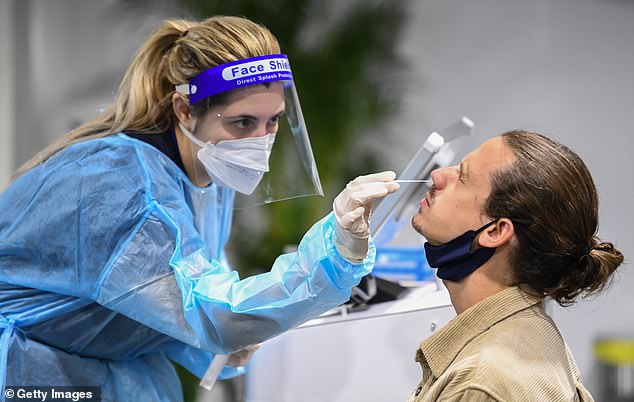 Omicron will make up half of all Europe’s Covid cases within ‘the next few months’, the EU’s disease control agency has warned (file image)

While much still needs to be confirmed about Omicron, including whether or not it causes more-serious illness, the ECDC says it will make up half of all Europe’s cases ‘within the next few months’ as it out-competes the Delta variant.

In its memo, the agency said: ‘The probability of further introduction and community spread of the Omicron VOC in EU/EEA countries is currently assessed as high.

‘The impact of the further introduction and spread of Omicron could be very high, but this situation needs to be evaluated as further information emerges.’

The report noted that the risks of getting infected with Omicron are still ‘highly uncertain’, but warns that the effects on vaccinated or previously infected people are ‘not yet known’.

Initial data gathered by WHO suggests most infections are mild, with few reports of hospitalisations and no deaths recorded among several hundred known cases.

That has led some, including Germany’s would-be health minister, to suggest Omicron could be a blessing in disguise by weakening the overall effect of Covid.

But scientists caution that the data-set is not yet large enough to know for sure whether Omicron is less serious, and that it will take two to three weeks for the picture to become clear.

Until then, the ECDC recommends vaccinating as many people as possible against Covid – starting with those who have not yet had a shot or a second dose.

Boosters should be given, scientists say, but only to those aged over 40 or with underlying health concerns.

Over-18s could be boosted as a precaution, the report says, but only starting six months after they completed the full course of their initial vaccine.

‘Physical distancing measures, ensuring adequate ventilation in closed spaces, the maintenance of hand and respiratory hygiene measures, the appropriate use of face masks, and staying home when ill all remain relevant,’ the report adds.

While travel bans may help slow the initial spread, scientists believe they will become ‘drastically less effective’ within the coming weeks as local infections rise.

‘Countries should prepare for a rapid and measured de-escalation of such measures,’ once community cases hit a certain threshold, the report adds.

Belgium was the first European country to confirm the arrival of Omicron on Friday last week, and since then it has been detected in 13 EU nations as well as the UK.

The earliest known infection was in the Netherlands on November 19, which was uncovered this week by retroactively testing Covid samples. 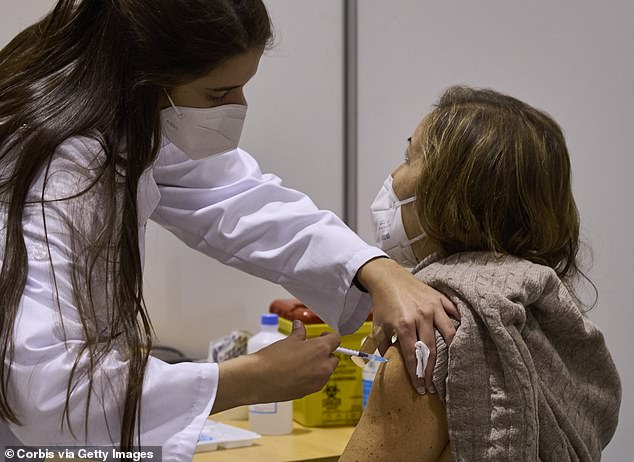 Leaders should urgently vaccinate all those who have not yet been jabbed or had a second dose before giving out boosters, the ECDC says (file image)

While most cases have been found in travellers arriving from southern Africa, where the variant is thought to have originated, cases of community spread have begun.

In Norway today, health bosses said between 50 and 60 people got infected with likely cases of the variant at a Christmas party last week despite all attendees being vaccinated and testing negative beforehand.

It comes after some of those who attended the party travelled to South Africa last week for a renewable energy conference.

Omicron has caused concern among the scientific community because it is the most-mutated form of Covid yet discovered, and has several mutations known to make the virus more infectious even among the vaccinated.

Early data from South Africa, where the variant was first discovered, suggests it does spread much easier than earlier variants such as Delta – with cases increasing by 400 per cent within a week.

But it is yet to be seen whether that leads to a corresponding rise in hospital admissions and deaths.

South Africa’s vaccine chief has said today that so-far it is ‘good news’, with hospitals showing a ‘sight uptick’ in admissions that is not on-par with previous waves.

But he added: ‘We’ve only had this virus around for just over a week so I think we really need to watch this space.’