Daredevil jumps through a TREE on his scooter

Take a bough! Incredible moment daredevil jumps through a TREE on his scooter

This is the hair-raising moment a daredevil successfully leaps through a forked tree on his scooter before landing back on the ground.

Footage shows Dejion Taylor, 20, from Long Beach, California, approach the tree from a skating ramp and push off into the air.

The daredevil flies through the tree before landing back on his scooter and regaining his balance.

Mr Taylor, who regularly shares his stunts on Instagram, later revealed that he executed the stunt on his third attempt. 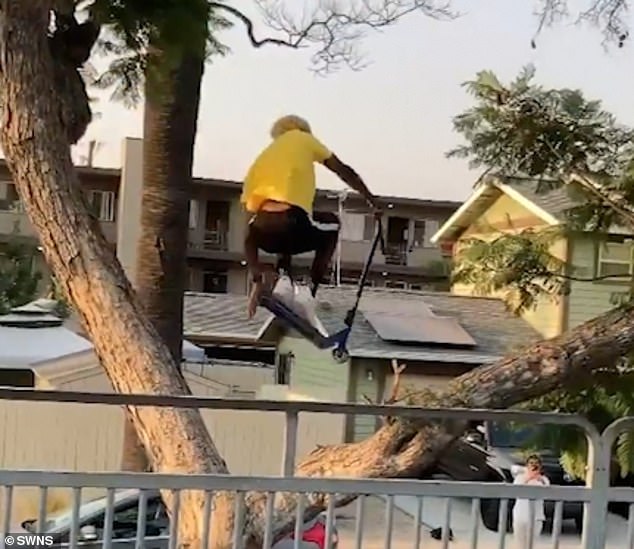 Dejion Taylor, 20, from Long Beach, California, leaps through a forked tree on his scooter

In a series of clips, Mr Taylor leaps through the narrow gap in the tree on his scooter before plummeting to the ground.

He then uses the momentum of the skating ramp to jump up once more before successfully soaring through the tree and landing back on his scooter.

Mr Taylor said: ‘You have to put the fears to the side and just do it.’

The 20-year-old said that he first started skateboarding when he was five before switching to the scooter as a teenager.

He continued: ‘I started off as a skateboarder and as I was going to skate parks more often I started seeing scooters and I decided to try it.

‘I got one for my 14th birthday and I just stuck with it ever since.’

Now, six years later, Mr Taylor has been performing in competitions and won at least 12 of them, has his own signature scooters and has even performed on the ‘Go-Big Show.’

The daredevil, who attributes his growth as a scooter rider to lots of practice, said flips and stunts were among his favorite tricks. 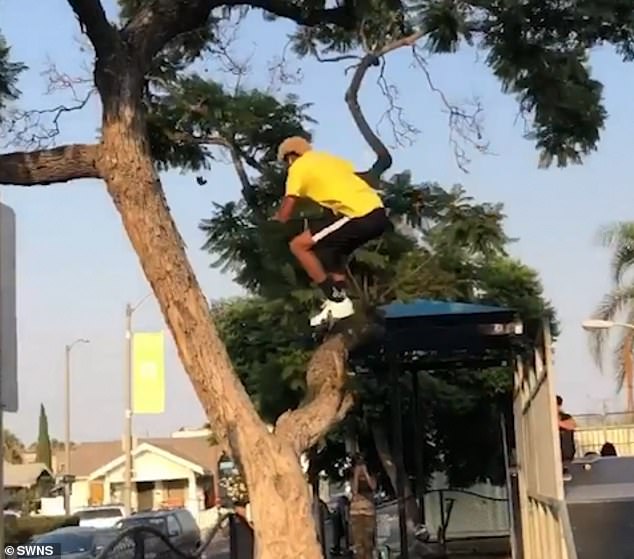 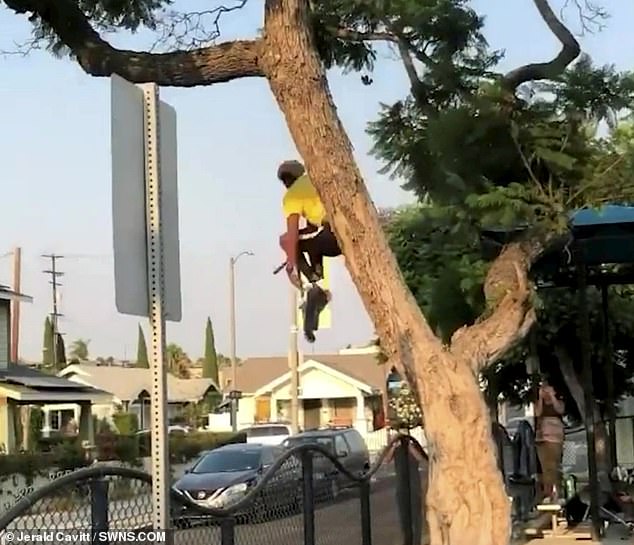 He said: ‘It’s fun going upside down. And doing big gaps, anything big I like doing.

‘Starting out you get a lot of practice in. Going to the skate park everyday, I learned about eight tricks a day, that was one of my goals.

‘You have to be consistent and try.’

Mr Taylor added: ‘I get to travel for competitions and see the country which I like.

‘But for me, it’s just more fun than anything.’

Social media users praised Mr Taylor for his efforts, with one describing the stunt as ‘too good’

After sharing his stunt online, Mr Taylor was met with array on comments from social media users praising his efforts.

One user wrote: ‘If you can fall like that, you’re not afraid of anything.’

While another commented: ‘Broooo (sic) to good.’

Meanwhile another person added: ‘OK second take where you flipped was definitely one for the books.’

a, daredevil, jumps, through, tree
You may also like: