Roars of ‘Come on England’ bellowed out of the pubs, houses and estates of Bermondsey on Friday night. What a pity, though, that just three miles along the Thames, politicians in Westminster couldn’t hear the passion, typified by one fan who sang along to God Save The Queen before shouting: ‘I love England. This is everything!’

Indeed, there could not be a more potent symbol of working-class English patriotism than men and women on a housing estate bedecked with the red-and-white flags of St George watching their football team play a major international match.

The residents of the Kirby Estate in Bermondsey, South-East London, are not the only community demonstrating their national pride so forcefully – but their eye-catching display takes some beating.

Of course, such enthusiastic expressions of patriotism are disdained by many among our ruling liberal elite. Who can forget, for example, Labour MP Emily Thornberry sneering at the sight of the St George’s Cross flying from a terraced house – disgracefully ignoring the fact that it was a symbol of belonging and not, as it seemed to her, a badge of shame.

Pride, too, is the reason that Chris Dowse and his friends Alan Putnam and Geraldine Howard organised the Kirby Estate flag display. 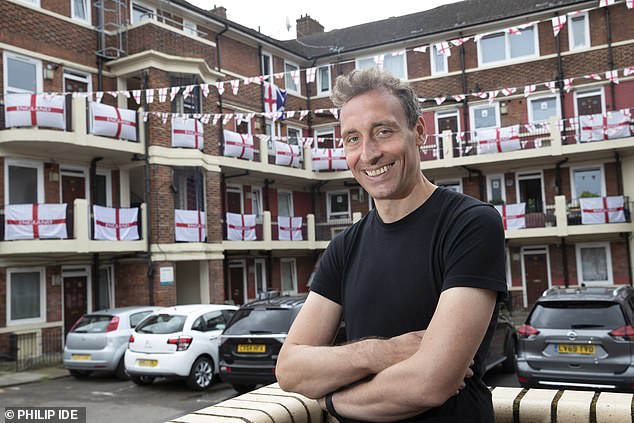 The residents of the Kirby Estate in Bermondsey, South-East London, are not the only community demonstrating their national pride so forcefully – but their eye-catching display takes some beating. Pictured: David Skelton on the estate

Alan, 52, a delivery driver, said: ‘It just seems natural, as a proud Englishman, to want to fly our national flag.’

Having written a book, The New Snobbery, about how Westminster has become dangerously hostile to the working class and, in some ways, too, overtly anti-Northern, I found the views on the Kirby Estate refreshingly open-minded – and utterly unworthy of that Establishment sneer.

To Chris Dowse, 42, patriotism is a fundamental part of who he is. Flying the St George’s flag, he said, is about his ‘core being’.

It’s hard not to think that the Brexit vote has had something to do with the resurgence in national confidence here, as well as in countless towns and villages up and down the country. Brexit and the host of opportunities it offers seem to go hand-in-hand with the growth in a confident, multi-racial patriotism that is a hallmark of the Kirby Estate.

As is often the case with today’s blinkered political debate, the facts are ignored. According to official statistics, 36 per cent of residents on the estate – located by Tower Bridge and next to Jamaica Road, named because of the area’s shipping links with the West Indian island – belong to the black ethnic group.

In this multi-racial community, almost every door has an England flag, although there are Portuguese, German and Turkish ones, too.

Chris said the suggestion that the St George’s Cross has become a far-Right symbol is ‘total nonsense’. An elderly black lady joined our conversation and her eyes lit up as she told me she thought the flags look ‘very nice indeed’. 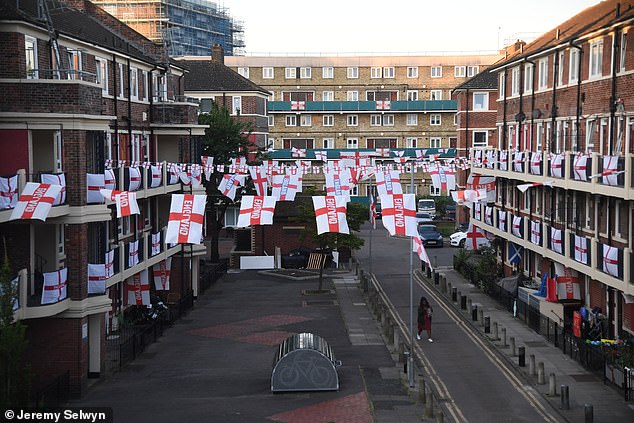 According to official statistics, 36 per cent of residents on the estate – located by Tower Bridge and next to Jamaica Road, named because of the area’s shipping links with the West Indian island – belong to the black ethnic group

However, there’s no denying an element of antagonism in the English/Scots relationship –and it isn’t just about football.

Earlier on Friday, there had been worrying scenes elsewhere in the capital as Scottish football fans rampaged through the streets with chants of ‘we f****** hate England!’.

No such hatred was evident on the Kirby Estate towards those north of the border, but there seemed to be a dwindling enthusiasm for the Union. The prevailing mood appeared to be that it was a cynical move of Nicola Sturgeon to let Scottish fans travel to London and stir up antipathy – all so the English might feel ‘good riddance’ and she could get her independence dream.

Alan Putnam and his daughter Maria shrugged with indifference over the prospect of the break-up of the Union. ‘It wouldn’t make any difference to us,’ Maria said.

A neighbour called Alison then shouted out: ‘English, not British… the Scots can leave if they want.’ A neighbour, Chris chipped in, saying that, as an Englishman, he ‘doesn’t really feel British at all’. However, like many with a mixed heritage, Henry Townsend, 47, whose mother was Scottish and his father English, is torn.

Other political issues rankle. Players’ ‘taking the knee’ is not popular, but it is tolerated. ‘We don’t know why they are doing it but we wouldn’t boo our own team’ is the general view.

Although 73 per cent of residents in the Southwark constituency voted Remain, I’m sure most on the Kirby Estate were Leavers. Many were infuriated by the Remain and Project Fear campaigns and by the subsequent post-Brexit vote attempts by politicians of all parties to block the people’s will. 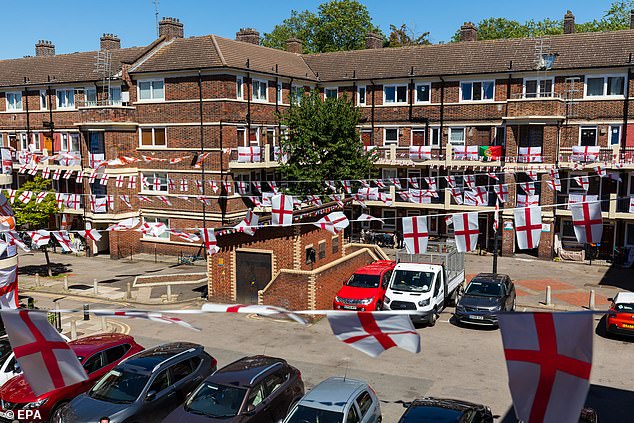 In this multi-racial community, almost every door has an England flag, although there are Portuguese, German and Turkish ones, too

Henry Townsend said he is pleased Brexit is going well and recalls people celebrating on the day of the Leave vote. His father, Del, who has since died, served in Asia during the war and celebrated, saying: ‘We’ve taken our country back from Brussels.’

They like Boris Johnson here, saying he’s the only leader with strength and a belief in England. It’s hard to find many Sir Keir Starmer fans. Indeed, Henry said he thought Labour hadn’t recovered from ‘choosing the wrong Miliband ten years ago’.

Recently, the PM said he wants to recover some of the country’s energy and optimism. There’s plenty of that on the Kirby Estate.

For it was very close by, on January 30, 1965, that dockers so memorably lowered their crane jibs in tribute as Winston Churchill’s coffin passed down the Thames.

The locals would have undoubtedly agreed with the ‘Greatest Englishman’s’ own views on nationalism: ‘Where it means love of country and readiness to die for country; where it means love of tradition and culture and the gradual building up across the centuries of a social entity dignified by nationhood, then it is the first of virtues.’

Gone are the dockers, though many on the estate remember Bob Mellish, an icon for the docker-classes, who was their MP for 36 years and whose values they still share.

He was the 13th of 14 children (of whom only six survived) of a docker. However, in the 1980s he was ousted when ‘yuppie’ newcomers drove Labour to the anti-patriotic hard-Left.

Gone, too, is the estate’s main pub, The Boatman, which has been converted into ‘luxury’ flats. 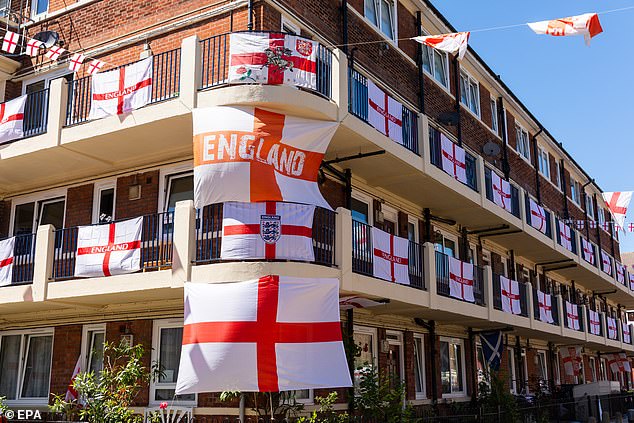 Gone are the dockers, though many on the estate remember Bob Mellish, an icon for the docker-classes, who was their MP for 36 years and whose values they still share

Chris Dowse says some of the ‘snootiest’ comments about the estate’s working-class patriotism have come from another well-heeled block next door.

During last Sunday’s England/Croatia game, Chris says someone in the ‘ivory towers next door’ yelled: ‘Keep the noise down!’ There’s certainly a feeling that even though they are just across the river from the City of London, which helps the capital generate about 22 per cent of Britain’s GDP, there is insufficient investment in local services here.

Indeed, people are thinking of resorting to crowdfunding to raise money to improve the facilities of an estate where lone parents with children make up the biggest social group (31 per cent).

Alan Putnam points out that he continued work as a delivery driver at the height of the pandemic when many other professional classes worked from their homes. Proof is the nearby £435 million Shard skyscraper, where very few staff have returned full-time.

As ever, social media sites are also happy to attack this symbol of working-class England. A typical reaction on Twitter to seeing a photo of the flag-garlanded flats was: ‘Kirby Estate gives me so many bad vibes with their desperate need to throw the flag about. It’s so intimidating and unnecessary. If it’s making me uncomfortable as a white girl, I can’t imagine how it makes ethnic minorities feel.’

That gross caricature of working-class men as football hooligans or ‘gammons’ (the insult for rosy-cheeked, white, middle-aged men outspoken in their Right-wing political views) is the default option for too many metropolitan liberals.

Any mention of one of that group’s leading cheerleaders, Jeremy Corbyn, does not go down well.

Notoriously, the ex Labour Party leader once pointedly refused to sing God Save The Queen at a service to commemorate the Battle of Britain.

I bet Corbyn and many other English MPs, unlike the proud patriots of the Kirby Estate, didn’t bother joining in the National Anthem before Friday’s England match.