Singapore: Former Australian foreign minister Gareth Evans has told opponents of the coup in Myanmar that they may have to consider a compromise with the junta and its “murderer in chief” to avoid a humanitarian disaster on the scale of Syria.

Appearing at a webinar alongside the spokesman for Myanmar’s newly announced administration in exile – the “national unity government” – Evans said security forces had committed “the most heinous crimes against humanity”. He said the Tatmadaw, as the military is known, ideally had to be permanently sidelined as a political player in the country it has largely ruled for decades, and those who have committed atrocities prosecuted.

Myanmar has descended into chaos in the 10 weeks since the military seized control.Credit:Getty Images

That is the ambition of those leading the campaign to oust Senior General Min Aung Hlaing and his brutal regime. A bloody post-coup crackdown against the pro-democracy movement has killed about 738 people and detained some 3261, according to monitoring group the Assistance Association for Political Prisoners.

Protesting the junta chief’s invitation to the Association of South-east Asian Nations emergency summit on Myanmar to be held in Jakarta on Saturday, Dr Sasa, the international spokesman for the shadow government, said the appearance of the senior general there would be “an insult to [the] great people of Myanmar”.

Evans, the architect of the United Nations’ Responsibility to Protect doctrine on crimes against humanity, said more targeted sanctions, arms embargoes and naming and shaming, coupled with the internal uprising, could heap more pressure on the military and would hopefully trigger its collapse.

However, he said his experience with the peace process in Cambodia in the early 1990s had shown him that if more bloodshed could be avoided by negotiation and a settlement, it was a path that had to be considered. 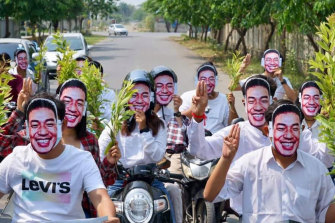 “As painful as this will be to acknowledge, we have to contemplate the need to at least start thinking about an alternative scenario which would avoid a catastrophic escalation of the present violence into a full-scale Syrian-style bloodbath,” said Evans, appearing alongside Dr Sasa in the webinar.

“That alternative scenario might be one where the military does not completely capitulate, but feels itself under so much pressure that it starts looking for an exit strategy, or ‘off ramp’, which would save at least some of its face and some of its previous institutional role. Any such outcome would necessarily involve some concessions from the national unity government which it will not be at all happy to make, and in the ideal scenario I described, would not have to.

“But sometimes circumstances demand – as I found in dealing with the Khmer Rouge in negotiating the Cambodian peace plan a generation ago – that, if even more death and misery are to be avoided, one at least explore the possibility of mediated dialogue with those whose behaviour has been almost indescribably awful.” 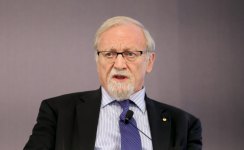 Gareth Evans is a key proponent of the UN’s Responsibility to Protect doctrine.Credit:Daniel Munoz

The military said after seizing power on February 1 and detaining the leaders of the elected government that it would re-stage elections in a year. It alleged the November elections, in which Aung San Suu Kyi’s National League for Democracy was returned in a landslide, were fraudulent, a claim electoral officials and international observers have said has no substance.

A junta spokesman has since said the regime may prolong the current 12-month emergency rule for an additional year.

How effective the ASEAN summit will be in addressing the turmoil is yet to be seen but it already has one prominent absentee. Thai Prime Minister Prayut Chan-o-cha, who ascended to power via a military coup himself in 2014, is reportedly set to send his foreign minister instead.

Evans, one of Australia’s longest serving foreign ministers, said ASEAN was “the one organisation from which suspension really would trouble the generals”.

“At the leaders’ meeting […] there is at least some prospect that Myanmar’s suspension from the organisation will be, if not agreed, at least seriously floated, and this would do something to concentrate the generals’ minds on their present friendlessness,” he said.

Be, deal, junta, May, needed, With
You may also like: