Deliveroo sales soared by 99% to £3.4 BILLION in the first six months

Deliveroo sales soared by 99% to £3.4 BILLION in the first six months of the year thanks to lockdown boosting takeaway orders

Deliveroo has revealed bumper sales in the past three months, which are set to be higher than first thought.

The company said the gross transaction value – the amount spent by customers – hit £3.4 billion in the first six months of the year, up 99 per cent on the same period a year ago.

Deliveroo sales in the UK and Ireland were particularly strong – up 87 per cent in the three months to June, hitting £921 million, compared with 65 per cent growth in the rest of the world of £818 million. 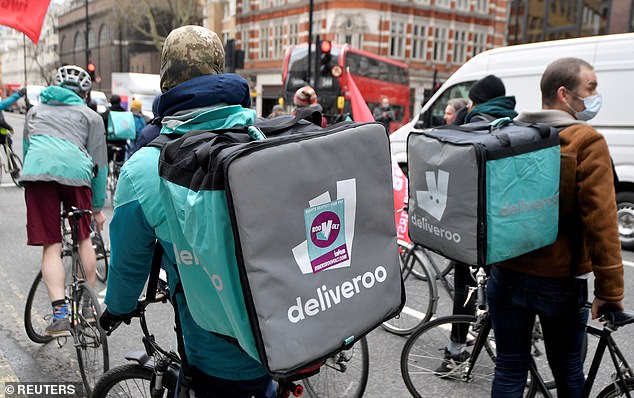 Deliveroo customers have spent £3.4 bn in the first six months of this year during lockdowns

The company said it has ‘seen continued strong growth and consumer engagement’, leading to an increase in guidance for the full year with around 15 per cent growth in the second half.

Bosses did not provide any details on why they believe sales will be ahead of expectations, although food delivery platforms have enjoyed strong growth due to Covid-19 lockdown restrictions.

As a result, Deliveroo said it sees ‘an opportunity to make further discretionary investments into growth opportunities’ and expects average order volumes to hit pre-Covid levels later this year.

The update is the second from the London-based company since it listed on the Stock Exchange in March, in one of the most widely-panned flotations in recent years.

Shares started trading at 390p but quickly sank by 30 per cent, with investors considering it overvalued.

It had been the biggest listing of 2021, although it was overtaken by payment processing business Wise, which launched on the stock market on Wednesday, valued at nearly £8 billion.