Four suspects were arrested in Denver after a maid working at a hotel near the city’s Coors Field baseball stadium discovered “a bunch of guns laid out” in a room, according to reports.

Coors Field is scheduled Tuesday night to be the site of MLB’s annual All-Star Game after the event was relocated there from Atlanta earlier this year over Georgia’s voting rights law.

But authorities said there was no immediate indication that the game or any of its related events were being targeted by the suspects, FOX 31 of Denver reported.

Police initially feared a “Las Vegas-style shooting” may have been in the works, the Denver Post reported, referring to a massacre in 2017 that left more than 60 concertgoers dead near a Vegas hotel. Just days earlier, authorities in Chicago dealt with a similar concern.

The report of the discovered weapons led to a massive law enforcement response, including SWAT personnel, to the Maven Hotel, according to FOX 31.

On Saturday, authorities said three men and a woman had been arrested, FOX 31 reported. The men were identified as Richard Platt, 42; Gabriel Rodriguez, 48; and Ricardo Rodriguez, 44, all taken into custody as part of an investigation into allegations of possession of a weapon by a previous offender, the station reported.

One of the male suspects posted on Facebook that he was recently divorced and wanted to “go out in a big way,” sources told the Post.

The female suspect was identified as Kanoelehua Serikawa, 43, who was being investigated on possible charges of possession of a controlled dangerous substance with intent to distribute. 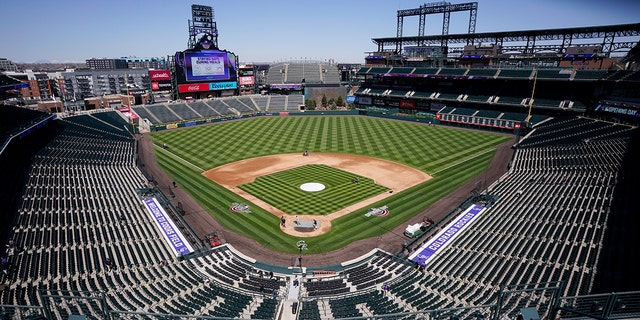 Workers prepare Coors Field on Wednesday, March 31, 2021, in Denver, the day before the Colorado Rockies’ season-opener against the Los Angeles Dodgers. (Associated Press)

Two of the male suspects were also being investigated on possible drug charges, FOX 31 reported.

Hotel guest Drake Voell said he and other guests received a phone call telling them to remain in their rooms as police conducted their investigation.

“I asked what was going on and they said there was just a few people that were up to no good on the fourth and the eighth floor,” Voell told FOX 31.

They were told that a maid had discovered the weapons and the hotel alerted authorities, he said.

Denver police said they searched two rooms and impounded two vehicles after arriving at the scene, according to the station.

It was unclear if the suspects were arrested at the hotel or at some other location.

Just days ago, authorities in Chicago also feared a possible “Las Vegas-style” crime was being planned when a suspect with a rifle was spotted in a room overlooking a city fireworks event. Authorities there later arrested a 32-year-old Iowa man in connection with the incident.

Bunch, Denver, maid, of, reports
You may also like: