Derelict three-bed house could sell for £2,000 at auction

Yours for just £2,000! One of the cheapest homes in Britain goes up for auction – but the new owners will need to do a little work…

One of the cheapest homes in Britain is set to be auctioned off for just £2,000 – but new owners will have a major refurbishment on their hands.

Hawkshead Drive in Bradford is home to two-bedroom flats that have sold for around £50,000.

But a three-bedroom house is set to go for a fraction of that price, as owners face dealing with ‘considerable water damage,’ a wildly-overgrown garden and piles of rubbish indoors. 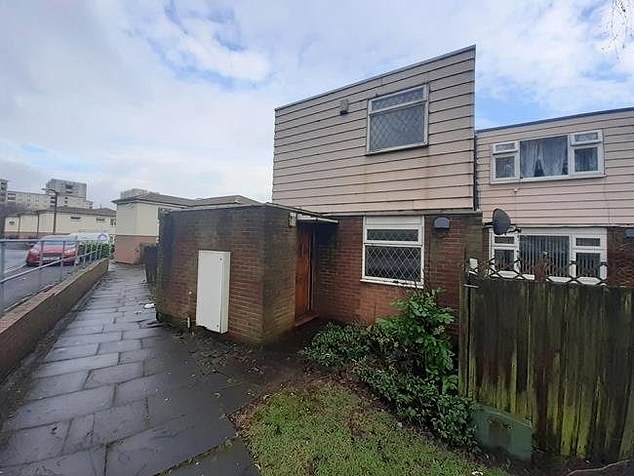 From the outside, the three-bedroom end-terrace house in Bradford barely shows the signs of how much work owners will have to carry out to wake it a home 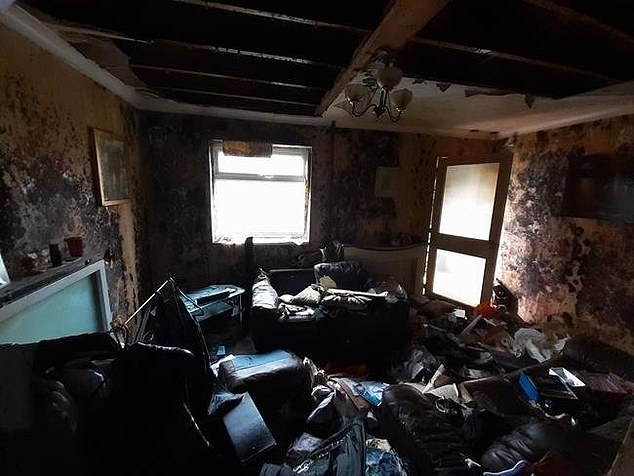 The lounge room’s ceiling has collapsed after suffering extensive water damage, with the walls also damage 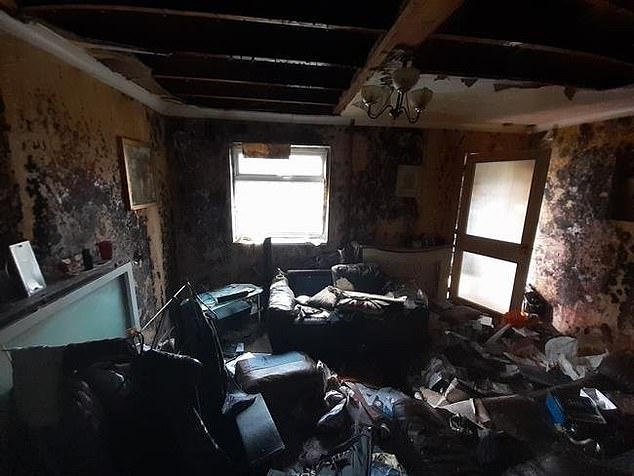 Rubbish lines the room with darkened room, with a light fixture somehow still in place, despite the ceiling around it falling down

The end terrace house has not been lived in for several months, with pictures taken inside showing the mammoth task owners will have to take on to turn it into a home.

Large sections of ceiling are missing from the ground floor living room, with mold covering the walls.

In the kitchen, there are piles of rubbish, with dirty plates still left on the worktops.

Clothes, post and old video tapes still line the walls and floors, months after the previous tenants moved out. Post and old video tapes line the floor and walls at the front door of the property, which will go up for auction next Tuesday 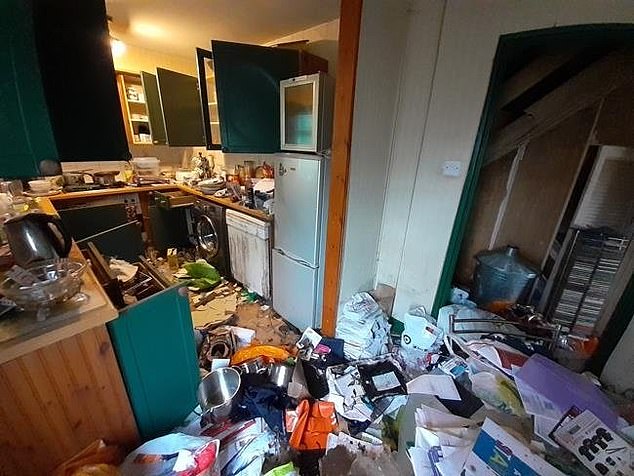 In the kitchen, there are still utilities like a washing machine and fridge – but they’re surrounded by dirty plates and old rubbish left behind for months 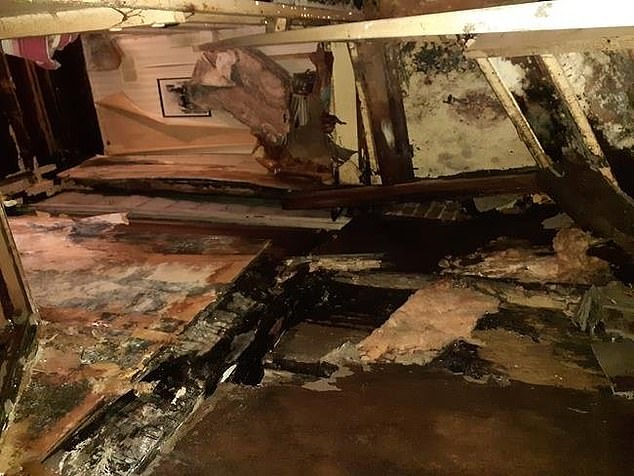 Upstairs, extensive water damage has caused the ceiling and floors to collapse. Auctioneers say the property will need a ‘full refurbishment throughout’

Outside, a small garden is overgrown with bushes, while even more items line a pavement – including a discarded TV.

The property is set to go up for auction on Tuesday, February 23, with a guide price of around £2,000.

Pugh Auctions states the house offers three bedrooms and one bedroom, along with a kitchen and lounge room.

The auctioneers’ website states: ‘Freehold 3 bedroom end terrace subject to a service charge in need of full refurbishment throughout. 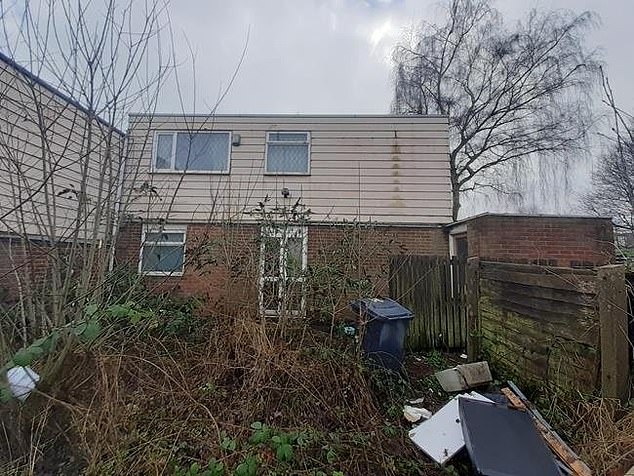 Outside, a small garden is overgrown with bushes, while even more items line a pavement – including a discarded TV 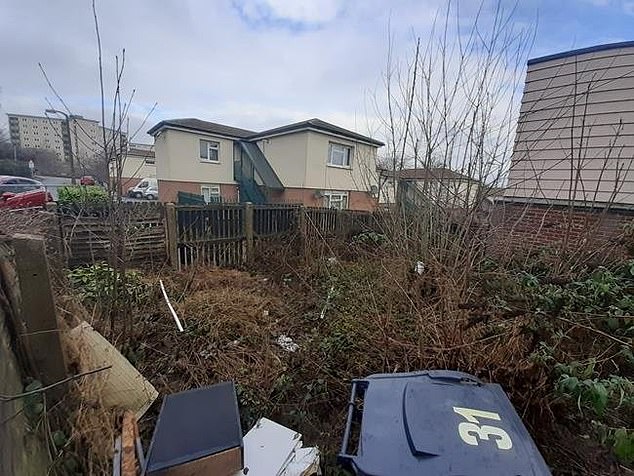 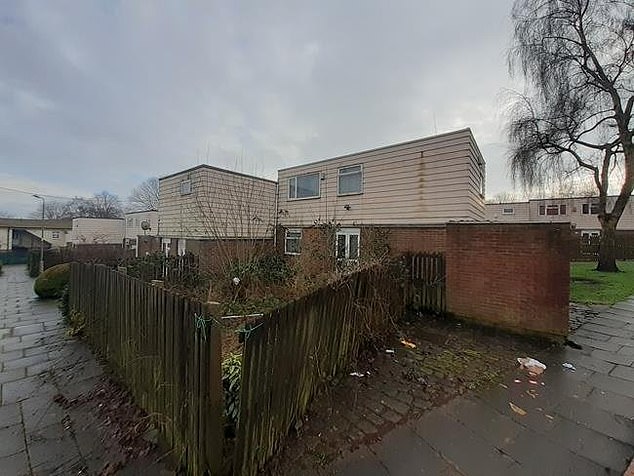 Fencing around the garden is in need of replacing as two panels are tied together to keep them standing. The property goes under the hammer on Tuesday

‘The property has not been lived in for several months and suffered considerable water damage.’

The house is based in a ‘predominantly residential area,’ according to Pugh Auctions.

It’s around one mile from Bradford City Centre and is also close to Bradford University, The Leisure Exchange retail complex and the Bradford Interchange.