A police chief  has demanded an extra 500 police officers to cope with the millions of staycationers who will descend on Devon and Cornwall in the summer after lockdown ends.

Families across the country are already planning staycations and days out after Boris Johnson announced Britain’s roadmap out of lockdown.

From April 12, Britons can stay in self-contained holiday cottages – with Devon and Cornwall among the most popular destinations.

It is estimated that the population of the two counties swells from 1.7million to more than 11million at the peak of the holiday season.

Now, Inspector Andrew Berry – the counties’ Police Federation chair – has demanded more police officers for his region amid concerns that police will struggle to cope with the huge influx of boozy holidaymakers. 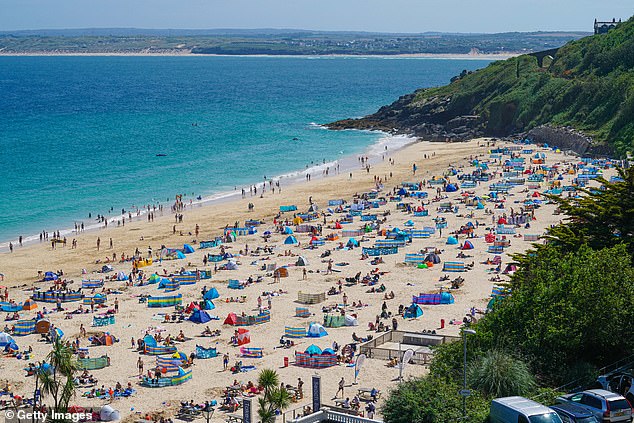 Holiday makers on Porthminster Beach on August 9, 2020 in St Ives, Cornwall. Staycationers are expected to flock the region post-lockdown 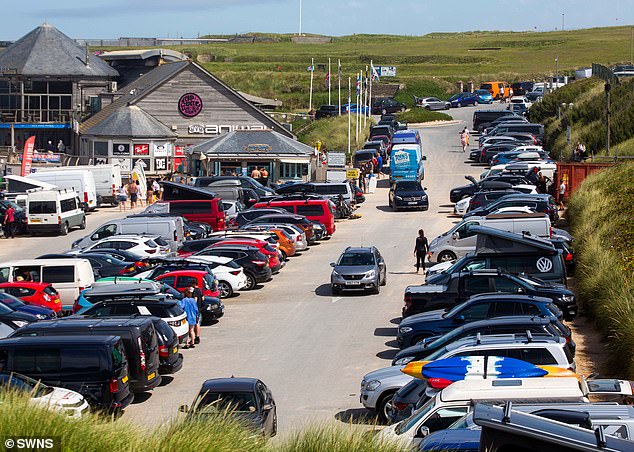 From April 12, Britons can stay in self-contained holiday cottages – with Devon and Cornwall among the most popular destinations

Police have additional responsibilities to enforce Covid regulations, as well as the usual crimes, adding to their burden, he said.

Insp Berry explained: ‘The demands on the police have grown – so it’s still going to be immensely busy even with the extra shifts.

‘In the winter, it is a relatively quiet rural force, and in the summer, with millions of people visiting, it’s much busier.

‘Policing over the summer is predominantly paid for by officers working overtime.’

Campsites and holiday lets across Britain saw a surge in bookings just hours after the PM  mapped out his roadmap out of lockdown.

Staycation giant Awaze recorded one booking every second and sold more than 10,000 UK breaks after the announcement.

Year-on-year growth compared to the same day last year saw Cornwall bookings up by 671%; Devon up 623%; and the two locations combined up by 643%.

Habitat Escapes, which offers luxury holiday rentals at Lower Mill Estate in the Cotswolds and Silverlake in Dorset, also reported a surge in bookings and enquiries. 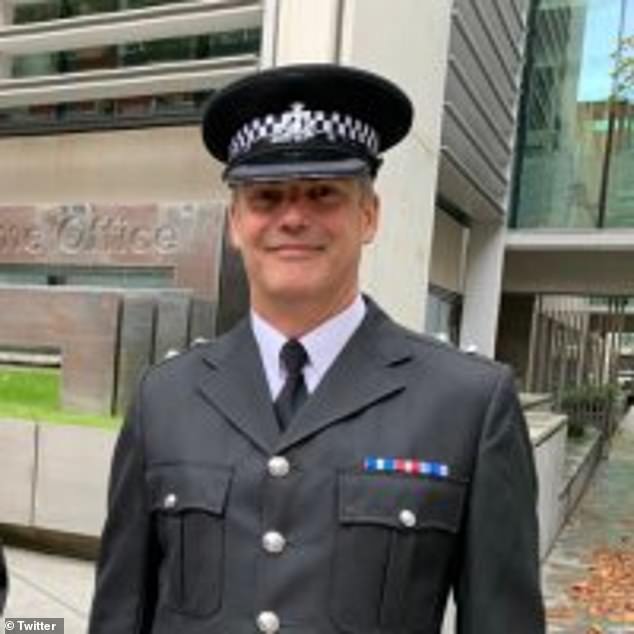 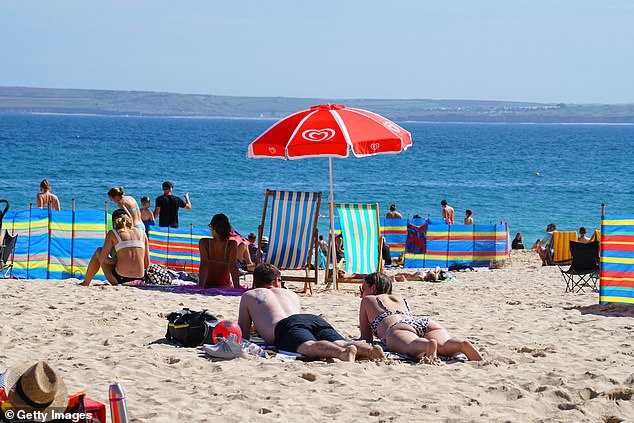 A study, conducted by Devon holiday park, Cofton Holidays, looked at recent online searches for over 400 top UK holiday destinations and found Cornwall to be the most popular choice

A study, conducted by Devon holiday park, Cofton Holidays, looked at recent online searches for over 400 top UK holiday destinations and found Cornwall to be the most popular choice.

How will lockdown ease in the roadmap?

Step One Part One: March 8

From March 8, all pupils and students will return to schools and colleges across England.

So-called wrap-around childcare will also be allowed to resume, paving the way for after and before school clubs to reopen.

People will be allowed to meet one other person outside for recreation, for example, to have a picnic or to meet for coffee.

Care home residents will be able to have one regular named visitor.

The Government’s stay at home order will remain in place, with travel for non-essential purposes still banned.

Outdoor sports like tennis and basketball will be allowed to reopen and people will also be able to take part in formally organised outdoor sports.

It is at this point that the Government’s stay at home guidance will end, to be replaced by ministers encouraging people to ‘stay local’.

However, the Government is expected not to define what constitutes local, instead choosing to rely on people using their common sense to decide on journeys.

People will still be told to work from home wherever possible while international travel will still be banned unless it is for essential purposes.

Nom-essential retail will be allowed to reopen as well as personal care premises like hairdressers, barbers and nail salons.

Public buildings like libraries, museums and art galleries will be allowed to welcome back customers.

Meanwhile, hospitality venues and outdoor attractions like theme parks will be given the green light to reopen in some form.

However, there will still be rules on household mixing: Essentially any activity which involves being indoors will be restricted to members of the same household.

Gyms and swimming pools will also reopen from April 12 but only on the basis that people go on their own or with their own household.

Pubs and restaurants will be able to reopen but at this point they will only be able to have customers outdoors.

Any visits to a pub or restuarant will have to comply with the rules on social contact, so no more than two households or the rule of six.

The Government will not be bringing back the old requirement for people to order a substantial meal with alcohol while the old 10pm curfew will be ditched.

All customers at hospitality venues will also have to be seated when they order food or drink, with ordering at the bar prohibited.

Campsites and holiday lets where indoor facilities are not shared with other households can also reopen but trips must be restricted a single household.

Funerals will be allowed to continue with up to 30 people, while the rules on wedding receptions will be eased to allow the number of guests to increase from six to 15.

The two household and rule of six requirements for outdoor gatherings will be ditched but gatherings of more than 30 people in places like parks will still be banned.

However, this will be kept under review by ministers to see if rules could be relaxed still further.

This is also the point at which pubs and restaurants and other hospitality venues will be able to open indoors, with the rule of six and two household limit in place. But groups meeting outdoors at pubs will be allowed to be bigger.

Entertainment venues like cinemas and children’s play areas will be able to reopen, as will hotels and B&Bs. Indoor adult sports groups and exercise classes can also reopen.

Changes will also be made to sporting and performance events in indoor venues with a capacity of 1,000 people or half full

Devon was also listed in the top 10.

Insp Berry said the surge means he would like to see the counties get extra officers during the summer months – in the same way police are seconded to big events such as Glastonbury or football matches.

‘Officers get moved to police specific events around the country,’ he explained.

‘For example the G7 summit in Cornwall, officers will get deployed to help with that.

‘But I think there needs to be a bit more imagination.

‘We get huge numbers of tourists, so why not bring in extra numbers from other forces to support places like ours which have so many visitors.

‘Put the resources where they’re required but look at it from a national perspective, rather than a parochial perspective.

As well as tackling crime, throughout the pandemic officers have increasingly had to assist the ambulance service with its work.

And Insp Berry is concerned this will happen more and more across the summer.

There are just 3,148 hospital beds in the counties for acute services, while it is estimated the population of the area increases by six-fold.

Alison Hernandez, Police and Crime Commissioner for Devon, Cornwall and the Isles of Scilly, said: ‘In spring last year businesses in Devon and Cornwall, an area which usually welcome more domestic visitors than any other part of the country, were in the unenviable position of having to ask would-be tourists to come back later as the country grappled with a threat unlike any we had seen before.

‘Thanks to a sensible police approach and through working with partners such as the Dartmoor National Park Authority we were able to open up and give many thousands of people a much-needed summer break while supporting our local economy.

‘My office was able to support this effort by funding Covid street, beach and moorland marshals in tourist hotspots and providing resources for policing targeted at the types of crimes we see rises in during the summer months.

‘Despite this effort the South West Tourism Covid-19 Impact Survey this month indicated that the region’s tourism sector lost more than half its annual revenue – £3.7bn – in 2020 because of Covid-19.

‘This year looks very different because of a world class vaccination programme by the NHS. With more than 18 million people having already had at least one dose I am now hopeful that with a careful unlock we can warmly welcome back visitors this year.

‘Fortunately coronavirus and successive lockdowns have not diminished Devon and Cornwall Police’s ability to recruit and train new officers.

‘Force strength will have soon grown by 317 officers since I began this job – a rise of 10 per cent.

‘Discussions are underway as to how we again maintain Devon, Cornwall and the Isles of Scilly this summer as a policing area with one of the lowest crime rates in the country.’

Mr Johnson said the travel industry will not reopen before Step Two begins on April 12, when people will be able to stay in self-contained accommodation.

No household mixing will be allowed at that stage and only cottages or Airbnb lets that do not have shared facilities will be permitted to open.

Outdoor hospitality will begin at this point, meaning holidaymakers will be able to enjoy beer gardens and restaurants or cafes that have outside seating.

However, those wanting to stay in hotels, B&Bs or hostels will have to wait until at least May 17.

At this point, indoor hospitality in pubs, restaurants, bars and cafes will begin again.

The exact timing will depend on four key tests, which include the continued rollout of the vaccine programme and evidence that the jabs are reducing Covid hospitalisation and death rates.

Simon Altham, Group Chief Commercial Officer said: ‘We welcome the roadmap from the Government, which gives holidaymakers and property owners in England clarity over taking and enjoying a staycation this year.

‘Last year following similar announcements we saw bookings peak at one every 11 seconds, but this time demand has exceeded our expectations and comfortably broken that record.

‘It is clear that Brits are desperate to get away, and now have the clarity and confidence to book.

‘This will be welcome news for many businesses that rely on tourism across England and will allow them to plan their reopening carefully and considerately.

‘We do recognise that some people will be disappointed they can’t get away sooner, but since the start of the pandemic the health and safety of our customers, property owners and local communities has been a top priority and we will continue to work carefully to follow all the Government guidelines in the coming weeks and months.

‘Most of all we look forward to welcoming our customers back and playing our part in helping them experience and enjoy a well-earned break following an incredibly tough year.’

And, chie, Cornwall, Devon, police
You may also like: