A disabled teacher at a Louisiana high school was injured by a  student Wednesday during a suspected TikTok challenge, according to police.

The “slap a teacher” challenge has allegedly inspired a number of recent violent acts at schools, but TikTok claims that it has seen no evidence of the trend. The “challenge” has prompted strong responses of condemnation from the California Teachers Association and the Connecticut attorney general.

The latest alleged incident occurred at a high school in Covington, where 18-year-old Larrianna Jackson punched her 64-year-old teacher. Due to injuries sustained by the attack, the teacher went to a hospital to seek medical attention, police said. 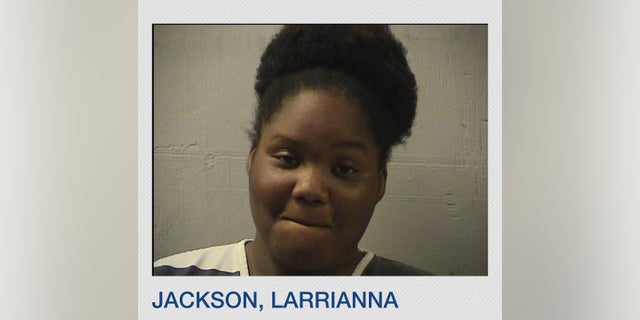 The Covington Police Department responded to Covington High School in reference to a student physically assaulting a schoolteacher after the dismissal bell rang. Larrianna Jackson was arrested and charged with violation of L.R.S. 14:34.3, Battery of School Teacher (Felony). Jackson was then transported to St Tammany Parish Jail where she will await prosecution.
(Covington Police Department Facebook)

Officers examined video of the incident, during which Jackson approached her seated teacher and punched the teacher, knocking her to the ground. Jackson then proceeded to violently punch the teacher, at which point the video ends.

Officers alleged the attack could be tied to the “slap a teacher” challenge. Jackson has been charged with Battery of a School Teacher (Felony) and was taken to St. Tammany Parish Jail where she will await prosecution.

“The Covington Police Department would like to remind everyone that anyone who participates in such a challenge will be booked accordingly. In this post we also attached the video that has been circulating around the internet. This matter is still under investigation and more arrests for forthcoming,” a statement issued by Covington Police said.

TikTok claimed in a statement that “this is not a trend on TikTok.”

“The rumored ‘slap a teacher’ dare is an insult to educators everywhere,” TikTok tweeted. “And while this is not a trend on TikTok, if at any point it shows up, content will be removed.”

Word of the challenge has instead allegedly spread on other social media platforms, such as Facebook, according to Insider.

Fox News uncovered no search results for “slap a teacher” or related phrases on TikTok. There were, however, 11 videos posted by teachers discouraging assaults on teachers.

In September, school districts were reporting theft and vandalism by children who followed a viral TikTok trend called “devious licks,” in which kids filmed themselves destroying and stealing school property and later shared footage on TikTok.

Video results using the hashtag #deviouslicks were blocked. In addition, no results were found for a search of the phrase itself.