Doggy bag! Helpless canine is zapped by X-ray scanner at Wisconsin airport after owner ‘forgot’ to remove the pet from their carry-on luggage

A dog was ‘accidentally’ sent through an airport X-ray scanner in its owner’s carry-on bag this week – prompting the TSA to issue a light-hearted tweet about the dos and don’ts of taking pets on aircraft.

The tweet read: ‘A dog was accidentally sent through the X-ray this week. When traveling with any animal, notify your airline & know their rules. At the checkpoint, remove your pet from the bag and send all items, including the empty carrier, to be screened in the machine.’

It’s unclear what breed of dog the animal was, and the pet’s owner has not been identified.

But animal lovers were outraged, demanding to know if the dog had been harmed.

Comments included: ‘Accidental my gluteus max. Somebody tried to evade the rules, or become a headline … 100% purposely done.’ ‘That dog owner needs to be put in jail for treating her fur baby so cruel!!’ And: ‘So are we all avoiding the question of….is the dog okay?’

The poor pooch was snapped by the security machine during a routine scan at Dane County Regional Airport, Wisconsin, less than a month after Smelly the cat was zapped at JFK. The traveler claimed they had no idea the bold kitty had snuck into their bag. 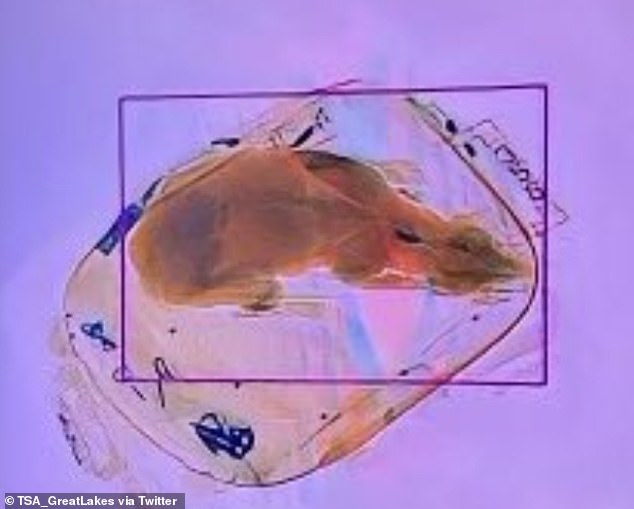 The X-ray shows the dog nestled in the backpack, seemingly unperturbed by the experience 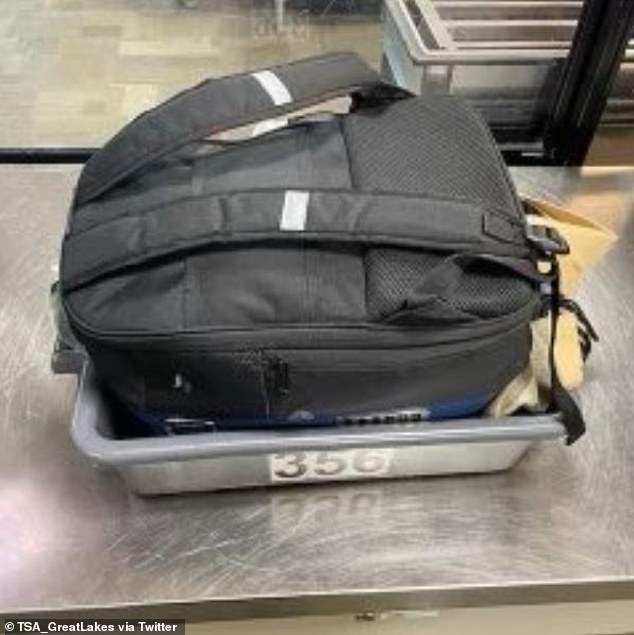 In both cases, the TSA insisted there was no harm done.

Spokeswoman Jessica Mayle told Channel 3000 the dog’s owner had correctly declared her furry friend to the airline, but had simply forgotten to remove it from her backpack before sending it through the scanner.

‘It looked like a backpack,’ she said, ‘so they kind of put the bag face down in the bin, so our officers did not know there was an animal inside and they sent the whole thing through, and then, of course, our officers are looking at the X-ray images, they see a dog on the screen and they say, “Wait a minute, this isn’t right.”

‘So they got the passenger, they connected them, they talked to her and educated her.’

She added: ‘In this case, it was just somebody who was naïve about the screening process and she just didn’t know the rules, so there was no malicious intent or anything there.’

It is unclear if the dog was a service animal permitted to travel in the aircraft cabin, or if it was put in the baggage hold for the flight. 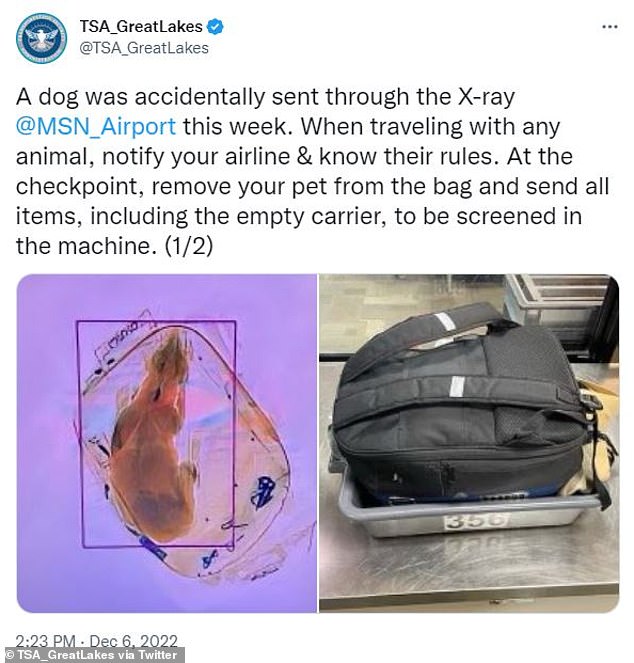 Both dog and its human were unharmed and continued on their journey.

And in answer to those concerned animal activists on Twitter, according to the FDA, the radiation dose typically received by objects scanned by a cabinet X-ray system is 1 millirad or less.

The average dose rate from background radiation is 360 millirad per year, so the dog was never in any danger.