From the puppies taking their first steps on a leash to the elderly pets being wheeled in trolleys, Victorians’ love for their pooches was palpable at Albert Park Lake on Sunday.

The world’s cares seemed far, far away when thousands of dogs and humans trekked five kilometres around the lake, as the RSPCA’s Million Paws Walk returned after an absence of two years due to COVID-19 restrictions. 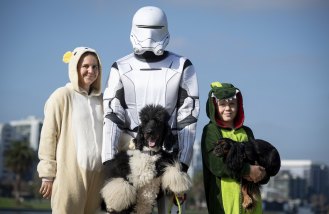 As well as to raise cash for animal welfare, a common aim was to have fun, and John Gibbins, 47, dressed as a Star Wars storm trooper for the five-kilometre trek with his family and two dogs, with the Melbourne CBD skyline in the distance. 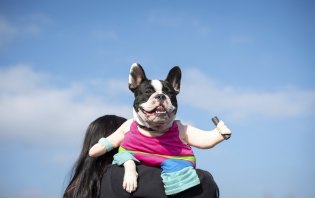 French bulldog Bella was dressed up by her owner Assunta Chan, of Doncaster East.Credit:Penny Stephens

John, from Plenty, in Melbourne’s north-east, said he chose the storm trooper garb, “because the outfit suits Raymond’s colours. And it’s just an excuse to wear a Star Wars outfit to a fun day out”.

He said it was nice to be able to resume taking their dogs — their second pooch is Reginald, a cavalier King Charles spaniel — on days out across Melbourne.

“The pandemic shut all that down.”

He said as well as supporting the RSPCA, “it’s good to come out and physically do something without it being over the top with exercise.”

The Albert Park Lake event was one of nine walks across Victoria, including Geelong, Wangaratta and Traralgon, that were expected to raise $360,000 for the RSPCA’s work protecting animals.

RSPCA Victoria CEO Dr Liz Walker said the Million Paws Walk had been cancelled for the last two years due to the pandemic and “it really is the best feeling” to be back.

“It’s joyful, it’s wonderful and it’s also a very big relief,” Walker said. “When you look around and see how people are really enjoying connecting with their dogs, celebrating their dogs, and supporting the work of the RSPCA, it really is the best day of the year, I have to say. 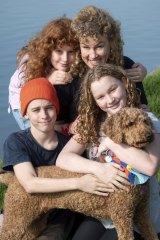 Rebecca Cook and her children Gulliver, Florence and Beatrix with Minnie their dog.Credit:Penny Stephens

“Do you know, no one has mentioned the election to me at all?” Walker said.

More than 30 stalls, in a field west of the lake, sold everything from dog toys to pet photography and canine clothes.

Rebecca Cook, of Rosanna, said her kids Florence 10, and twins Beatrix and Gulliver, 12, enjoy seeing all the breeds of dogs and the event “has a real carnival atmosphere”. Cook said she and her daughters, who all have curly reddish hair, are sometimes told by strangers they look like their poodle-cross dog, Minnie.

Walker said: “It makes me feel quite humble and grateful that there are so many people who really do love their dogs that much they’ll come out in support of them, and of our work.”

Walker said the money raised would go to care for the more than 14,000 animals that the RSPCA Victoria treats and shelters each year, as well as for its inspectorate and community outreach and education work.

Your essential guide to the best things to see and do in and around the city. Sign up to our Culture Fix newsletter here.