Domino's will soon have the largest electric pizza delivery fleet in the U.S.

The pizza chain plans to put 855 Chevy Bolts on the road to deliver pizza by the end of next year. 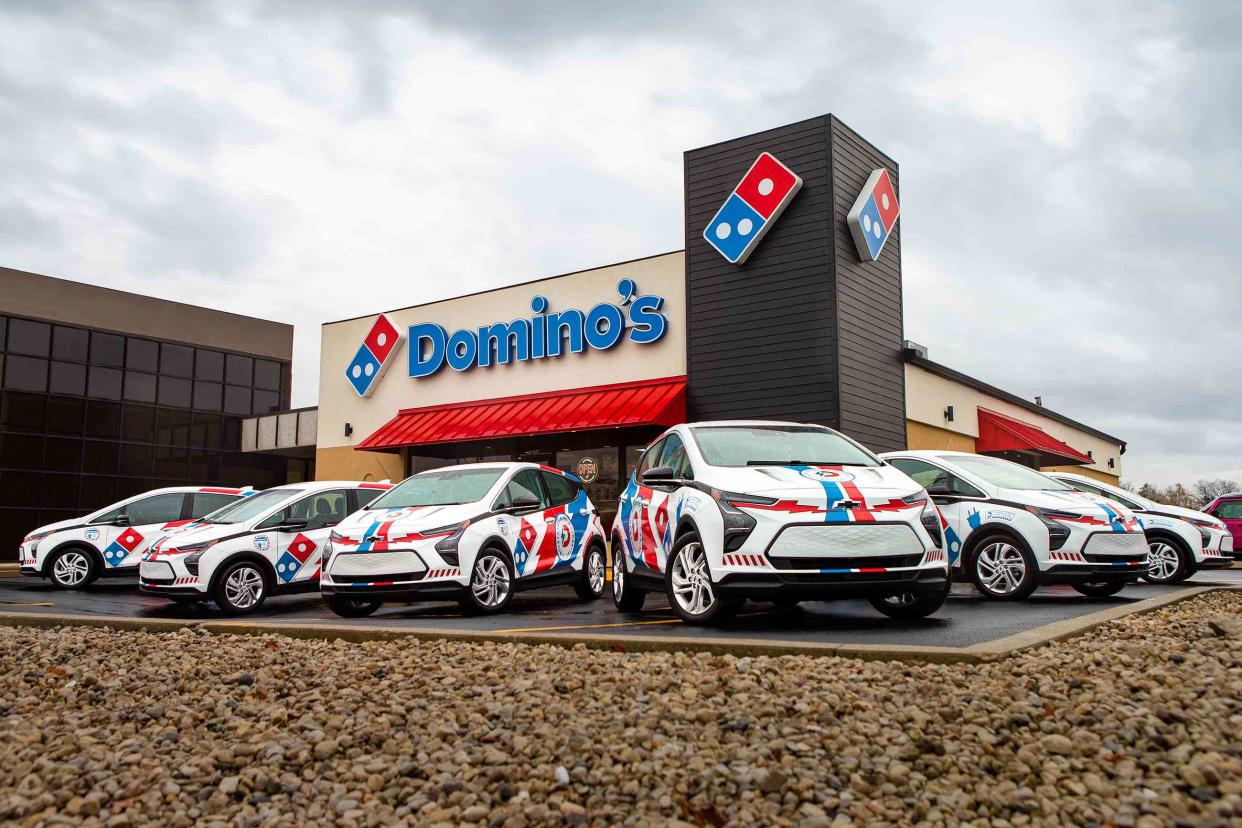 Domino's has 6,643 locations in the U.S. That's a lot of drivers doing a lot of deliveries, creating a lot of emissions. But this week, the pizza chain announced a significant step in cutting down on their gasoline use: a rollout of over 800 new electric vehicles.

Domino's says that over 100 custom-branded 2023 Chevy Bolts are arriving at select locations (both corporate-owned and franchised) across the country this month. And an additional 700 of these cars are set to roll out "in the coming months." Once all of them have hit the streets, Domino's — which is already America’s largest pizza chain by number of locations, edging out Pizza Hut — says they'll be able to boast "the largest electric pizza delivery fleet in the country."

"Domino's launched pizza delivery in 1960 with a Volkswagen Beetle, rolled out the DXP — a custom-built pizza delivery vehicle — in 2015, tested autonomous pizza delivery with cars and robots, and is now leading the charge in the future of pizza delivery," Russell Weiner, the company's chief executive officer, stated in the announcement. "Domino's has always been on the cutting edge of pizza delivery and electric delivery cars make sense as vehicle technology continues to evolve. We've made a commitment to net-zero carbon emissions by 2050, and this is one way we can begin reducing our environmental impact, one delivery at a time."

:New Jersey Now Has an Official Pizza Trail, and You Should Go

Domino's says these new Bolts offer plenty of advantages. Beyond the obvious zero tailpipe emissions and money saved by avoiding high gas prices, the chain also points out that owning their own electric fleet is an opportunity to recruit delivery drivers who don’t have their own cars.

Chevy owner General Motors also benefits from such a large partnership. "We're excited that Domino's has chosen the Chevrolet Bolt EV to build their electric pizza delivery fleet in the U.S.," Ed Peper, vice president of GM Fleet, stated. "Both companies are committed to bettering our environment. GM plans to eliminate tailpipe emissions from new U.S. light duty vehicles by 2035. With an affordable price, fun driving characteristics, and a 259-mile range, the Chevy Bolt EV is the future of Domino's electrified deliveries."

Domino's has even set up a website — dominos.com/evfleet — offering a state-by-state breakdown of where these new electric delivery cars can currently be found and how many are expected to be on the road by the end of 2023. If each of these 855 Chevy Bolts happened to go to a different Domino’s locations, about 13% of Domino’s stores would operate an electric car.