Donald Trump is furious that Joe Biden has managed to attract a star-studded line up to his inauguration, it has been claimed – in sharp contrast to the president’s own ceremony four years ago.

Trump, who will leave the White House before noon on Wednesday, was reported by The Washington Post to be angry that a roll call of stars are signing up to Biden’s event.

While Trump famously struggled to attract big names, Biden has confirmed Jennifer Lopez, Lady Gaga, Tom Hanks and country star Garth Brooks for his event, which he is urging people to watch from home owing to the COVID pandemic. 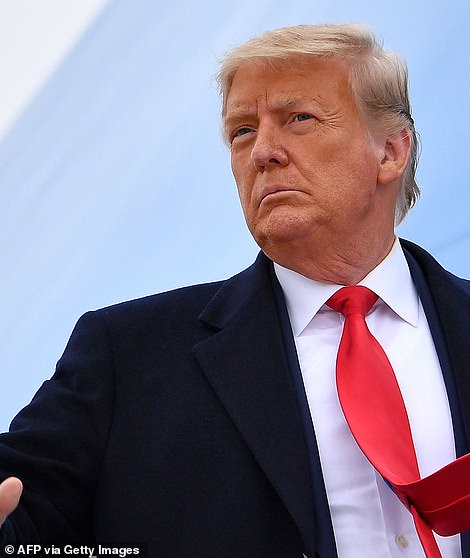 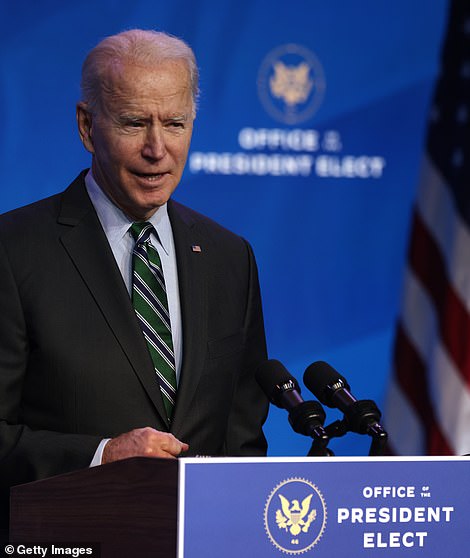 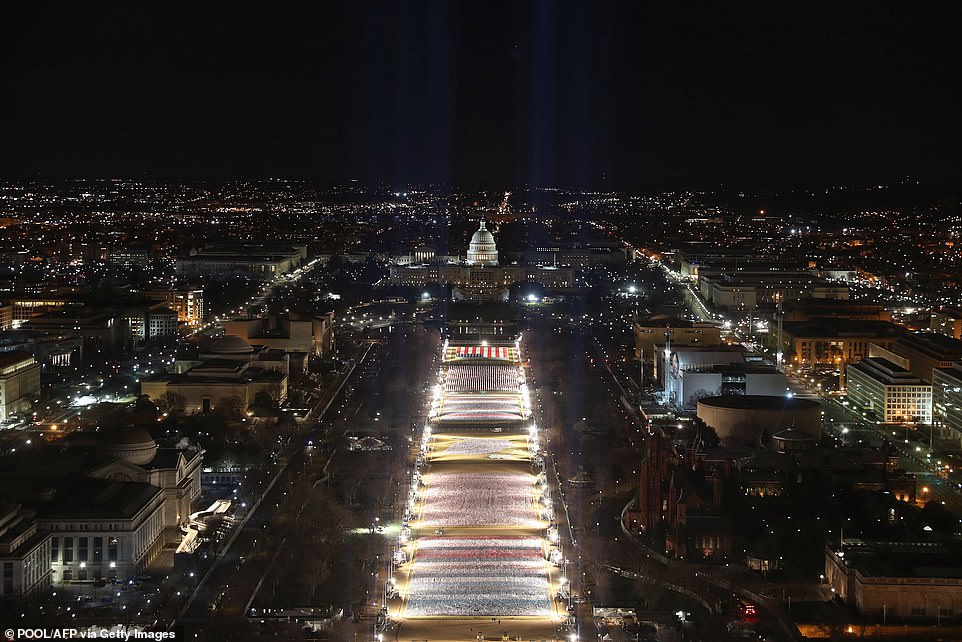 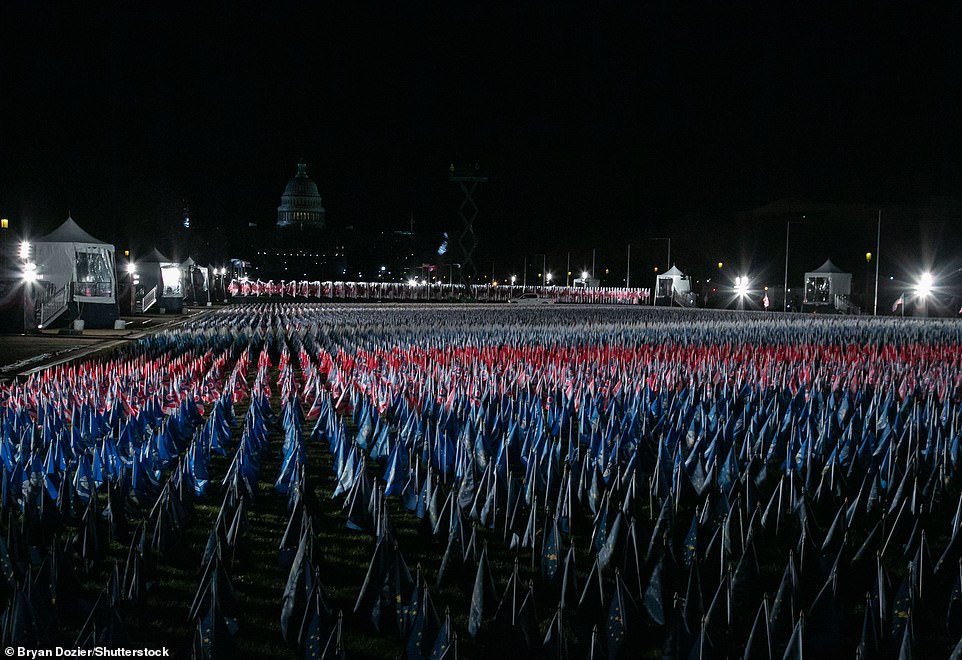 The flags are representative of the Americans who cannot travel to Washington, DC, to attend the inauguration in person due to the coronavirus pandemic 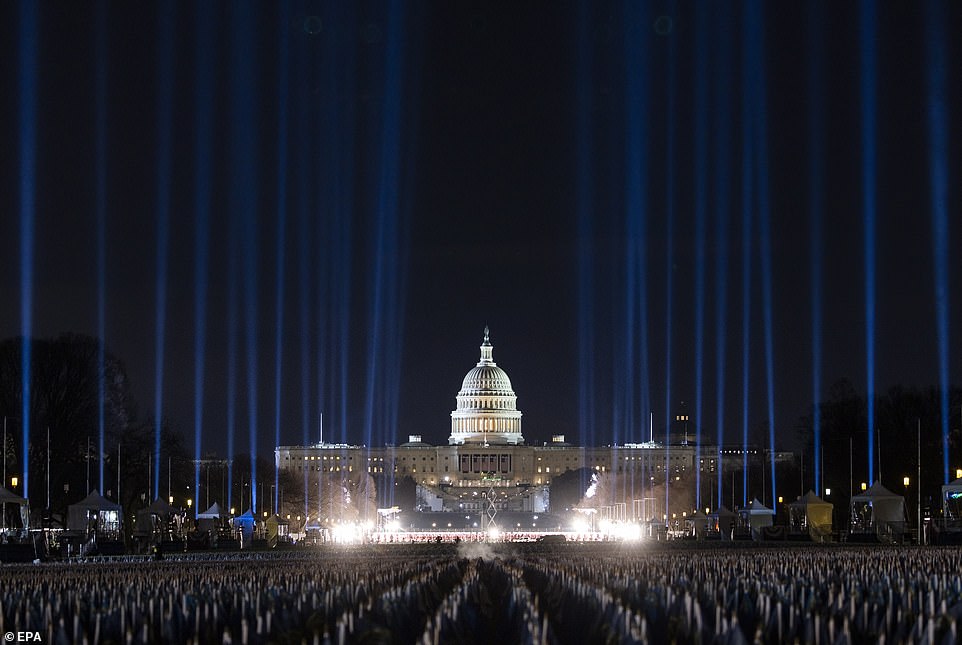 According to the Presidential Inaugural Committee (PIC), the pillars of light represent the 50 states and US territories and will illuminate the National Mall during the National Mall Lighting on Monday at 6.30pm

A member of the Mormon Tabernacle Choir resigned from the group rather than perform and MSG Entertainment, the organization that owns the Rockettes, said it was each dancer’s choice to perform after a dancer expressed concern on social media.

Barack Obama had no trouble drawing the stars, with Beyonce, U2, Stevie Wonder and Bruce Springsteen all performing. 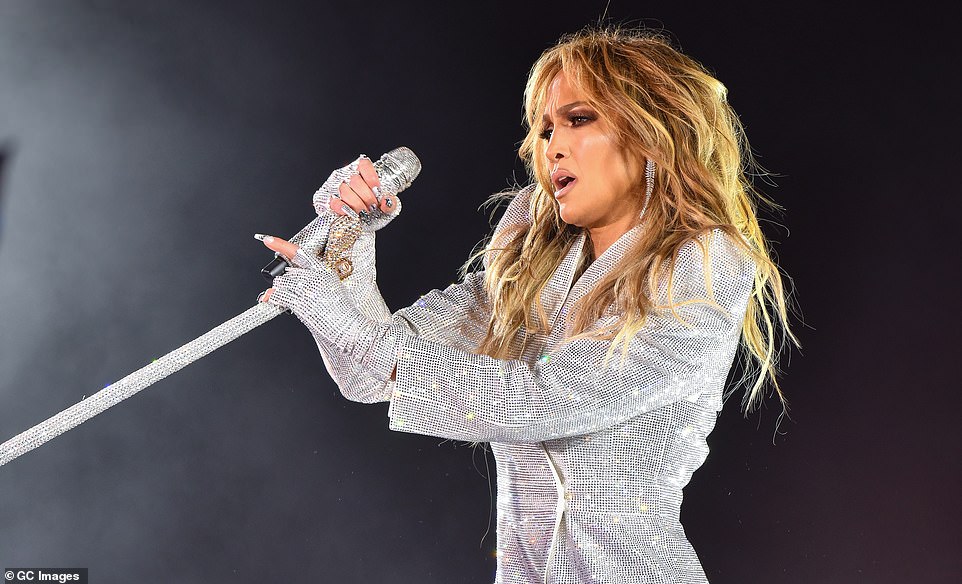 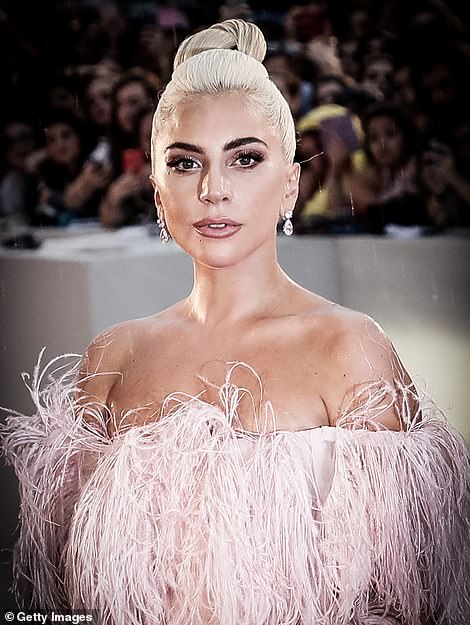 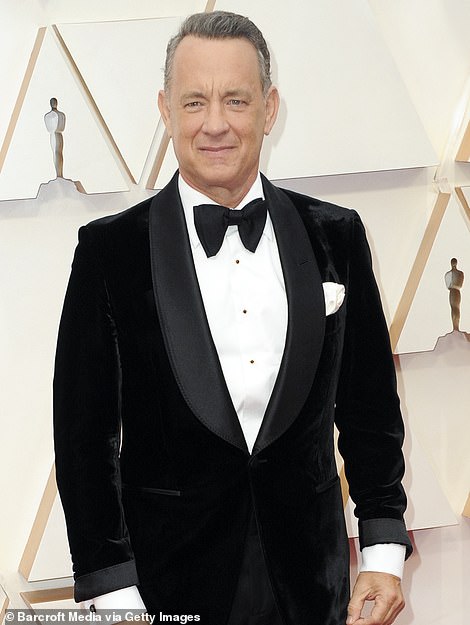 One source told the paper that, despite the chaos of the last few weeks, Trump found time to be particularly upset by Biden’s line up.

The president made it clear he will not attend Biden’s inauguration, becoming the first president since 1869 to snub his successor. Mike Pence, the vice president, will be there.

Trump plans to leave the White House and Washington DC on Inauguration Day with a departure ceremony at Joint Base Andrews.

Normally, the outgoing president attends the ceremony at the Capitol and is seen off by his successor, taking a helicopter from the Capitol to the military base just outside Washington which is home to Air Force One and other official government and military aircraft. 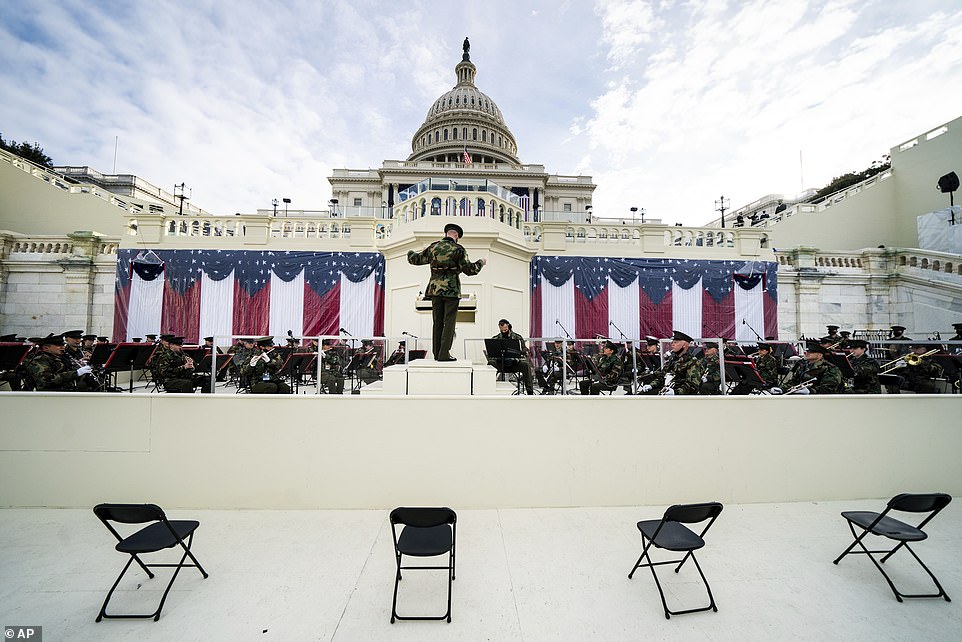 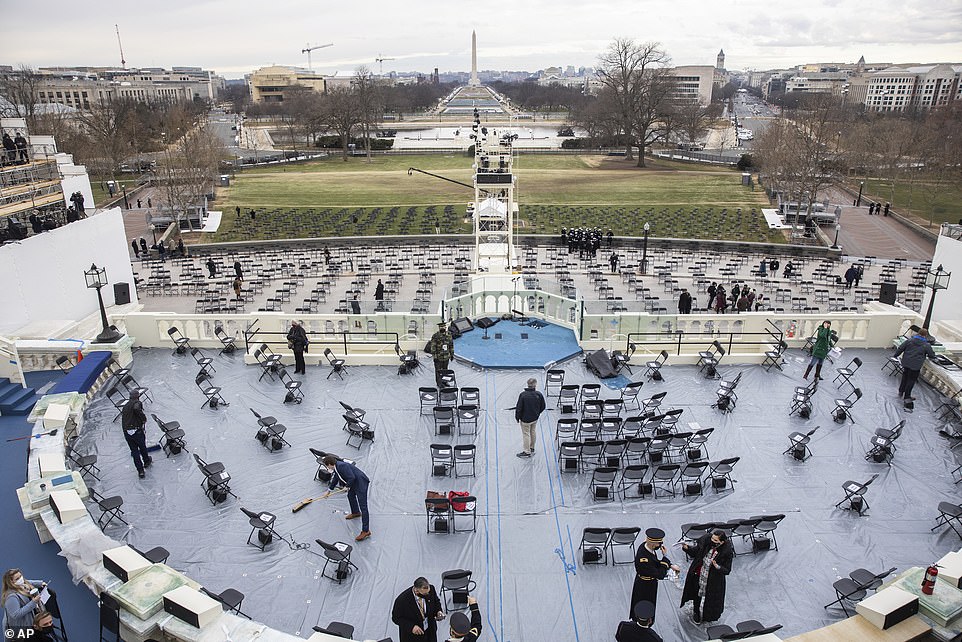 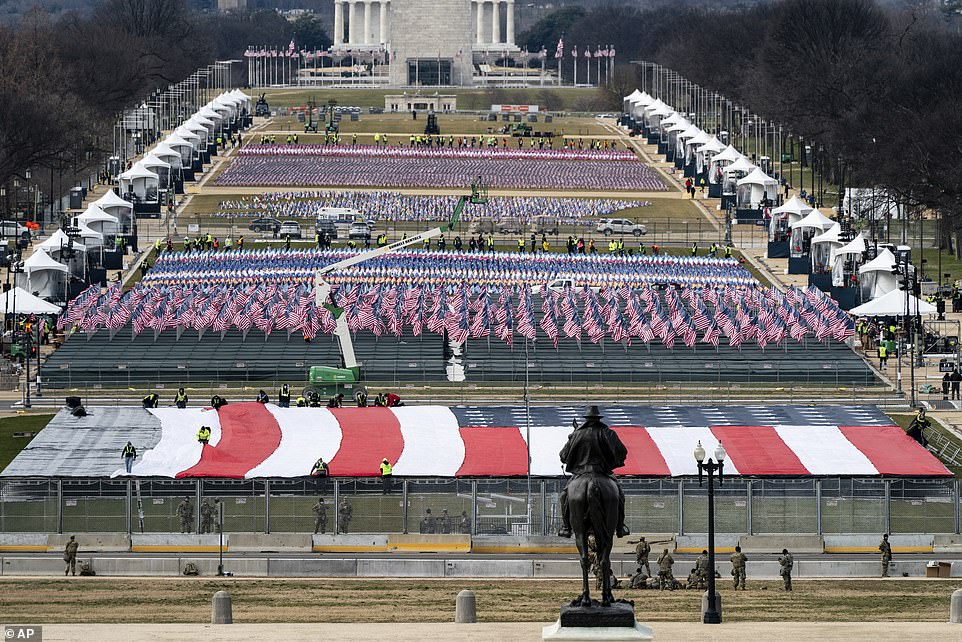 Recent past presidents have made brief remarks to staff and supporters before flying out of town.

Trump has not confirmed his post-presidency intentions, but it is believed he will live at his Mar-a-Lago estate in Florida.

His daughter Ivanka and her husband Jared Kushner have bought a $30 million plot of land in Indian Creek, Florida, and Donald Trump Jr is also expected to relocate to the state with his girlfriend Kimberly Guilfoyle.

Tiffany Trump, 27, is also looking to move to Miami.

The National Guard is deploying 25,000 troops to Wednesday’s event – at least two and a half times the number for previous inaugurals.

And while the military routinely reviews service members for extremist connections, the FBI is carrying out additional screening, in addition to any previous monitoring.

Multiple officials said the process began as the first Guard troops began deploying to D.C. more than a week ago. And they said it is slated to be complete by Wednesday.

The major security concern is an attack by armed groups of individuals, as well as planted explosives and other devices.

Ryan McCarthy, the Army Secretary, said on Sunday that intelligence reports suggest that groups are organizing armed rallies leading up to Inauguration Day, and possibly after that. 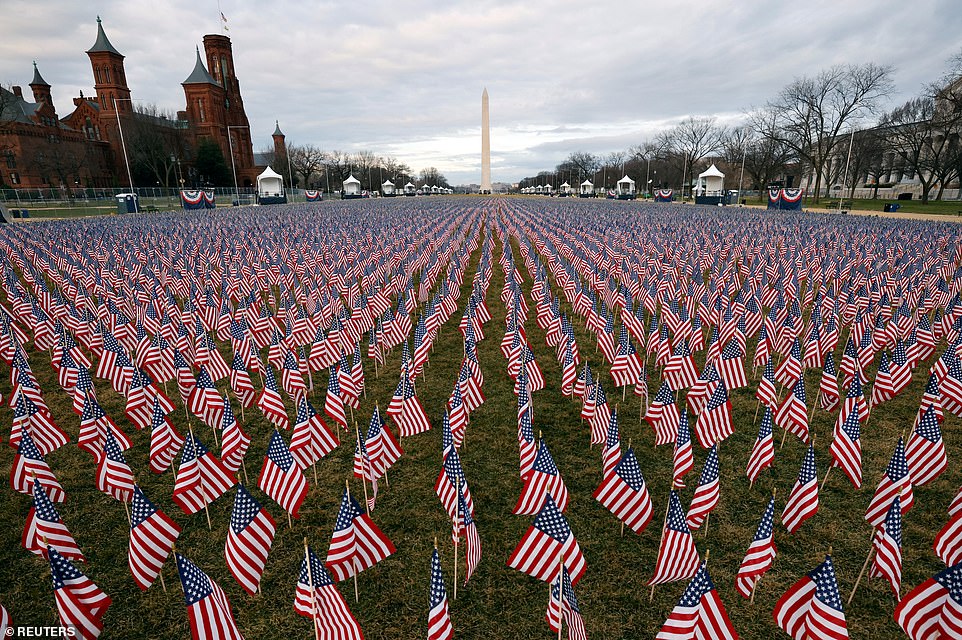 The display, which is called the ‘Field of Flags,’ is comprised of 191,500 US flags and 56 pillars of light

The bulk of the Guard members will be armed. And McCarthy said units are going through repeated drills to practice when and how to use force and how to work quickly with law enforcement partners. Law enforcement officers would make any arrests.

He said Guard units are going through ‘constant mental repetitions of looking at the map and talking through scenarios with leaders so they understand their task and purpose, they know their routes, they know where they’re friendly, adjacent units are, they have the appropriate frequencies to communicate with their law enforcement partners.’

The key goal, he said, is for America’s transfer of power to happen without incident.

‘This is a national priority. We have to be successful as an institution,’ said McCarthy.

‘We want to send the message to everyone in the United States and for the rest of the world that we can do this safely and peacefully.’ 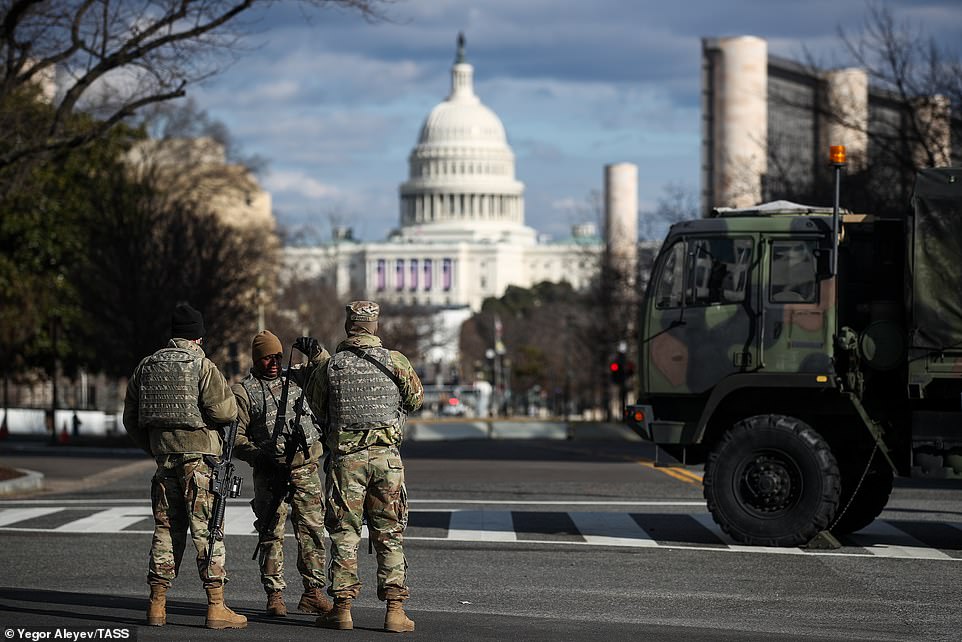 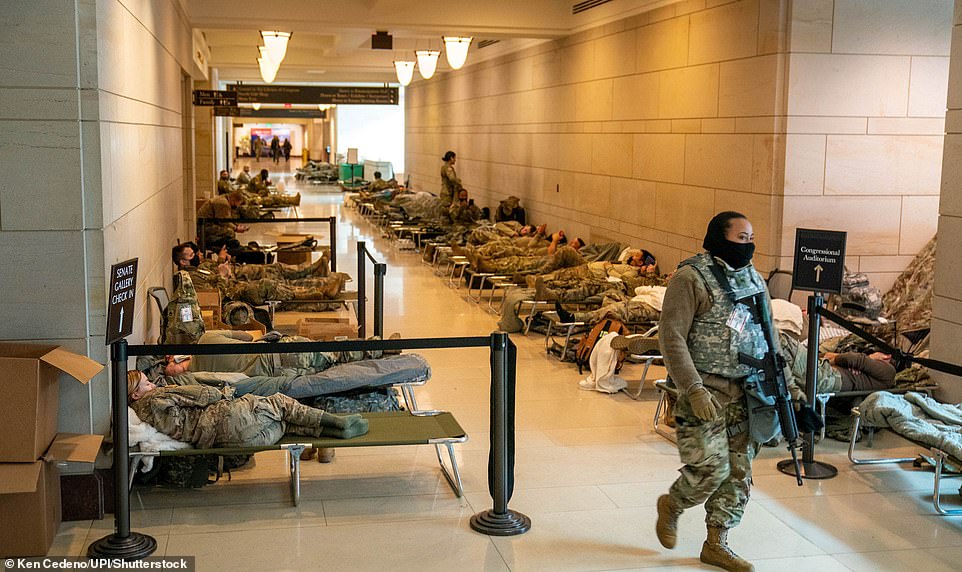 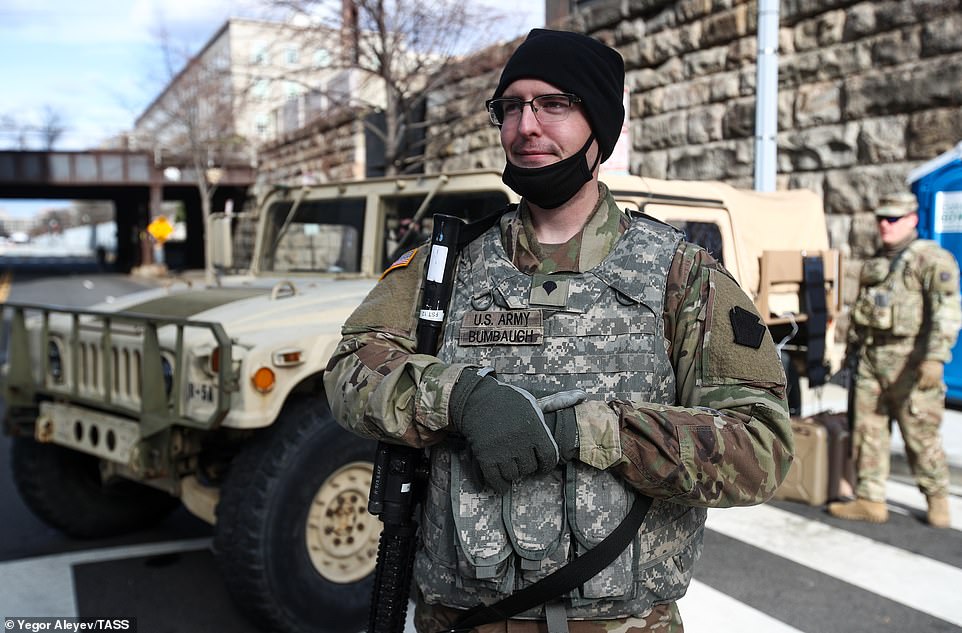 Around 25,000 National Guard troops have been deployed to Washington DC

Thousands of US flags have been placed at the National Mall in honor of the nearly 200,000 Americans who cannot be present for the inauguration due to the COVID-19 pandemic.

Images taken on Monday showed the flags carefully placed in rows near the US Capitol, months after a similar flag display honored the victims who died from coronavirus near the Washington Monument.

The flags are representative of the Americans who cannot travel to Washington, DC, to attend the inauguration in person due to the pandemic, which has infected more than 23.9 million Americans and taken the lives of nearly 400,000.

According to the Presidential Inaugural Committee (PIC), the pillars of light represent the 50 states and US territories and will illuminate the National Mall during the National Mall Lighting on Monday at 6.30pm.

The lighting will take about 46 seconds to commemorate Biden as America’s 46th president.