New York: In his biography, The Art of the Deal, Donald Trump wrote that “good publicity is preferable to bad, but from a bottom-line perspective bad publicity is sometimes better than no publicity at all”.

If anyone is able to turn an FBI search for classified government documents into a political win, it is the master of spin, the former Republican president. 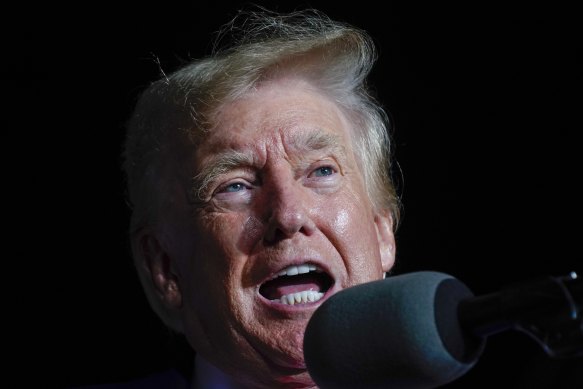 The former president is expected to announce his 2024 bid for the White House in the coming months.Credit:AP

A fundamental part of Trump’s appeal has always been that it is him against a corrupt government establishment.

The agency’s search of his Mar-a-Lago resort – and subsequent revelation that the Department of Justice acted on suspicion that Trump violated the Espionage Act – strengthens that case for millions of voters, who will see it as unjust persecution.

It couldn’t have come at a better time for Trump, whose poll numbers have been flagging in recent months. His endorsements in recent Republican primaries have been hit-and-miss, funding has been drying up and the buzz around potential rivals has been growing.

Trump can rely on a dutiful base – roughly 35 per cent of the electorate – but persuadable Republicans and independents have started to tire of his myopic focus on the “Big Lie” of a stolen election.

Conservative views on Trump darkened further over six weeks of televised congressional hearings on the January, 6 2021 attack on the US Capitol by the former president’s supporters. Polls showed that one third of Republican respondents thought the 76-year-old should not run for president again in 2024, up from a quarter who held that view in early June when the bipartisan congressional probe began.

Meanwhile, Ron DeSantis, the 43-year-old Florida governor, has been gaining on Trump in some polls, including in New Hampshire, the first primary state, where one recent survey had DeSantis statistically tied with Trump among Republican primary voters.

But nothing riles up Trump followers like an existential fight against “The Establishment”.

Alyssa Farah, a former Trump White House communications director, said: “I’m hoping [what the FBI finds] goes beyond simply not complying with some archiving laws, or the Department of Justice just handed Trump the Republican nominee and potentially the presidency.”

The image of FBI agents raiding a former president’s home under the cover of darkness has had an electrifying effect.

If he decides to run – and isn’t first brought down by any of his legal entanglements – Monday’s raid could just help propel Trump to victory.