Doom-mongering Remoaners were wrong to blame economic woes on Brexit

Doom-mongering economists are wrong to blame Brexit for Britain’s difficult trading relationship with the EU, a new report reveals.

Earlier this year, analysts at the Office for Budget Responsibility branded post-Brexit Britain a ‘less trade intensive economy’ after it was revealed that exports to the EU dropped 12 per cent – £20.3 billion – in 2021 compared with 2019.

A number of commentators, as well as Bank of England Governor Andrew Bailey, suggested the figures proved leaving the EU had damaged Britain’s economy.

But a landmark study by the Centre for Brexit Policy suggests there are multiple unrelated reasons why markets appear in decline, including domestic issues and Covid-19.

The think-tank’s report, which has been obtained by The Mail on Sunday, also delivers a warning shot to sceptics, calling on them to refrain from ‘crying wolf’.

The researchers said: ‘Many of these reasons [for decline in trade] are due to factors that are either temporary, or predate Brexit, or are independent of it.’

Explaining the £20.3 billion drop in trade with the EU, they said it was in part due to lower exports of oil to the EU.

They noted this was a domestic issue, brewing long before Brexit: ‘These falls in energy exports in 2021 are due to historic lows in output from the UK oil industry. And this fall in production is primarily due to a dramatic fall in investment in the North Sea since 2014.’ 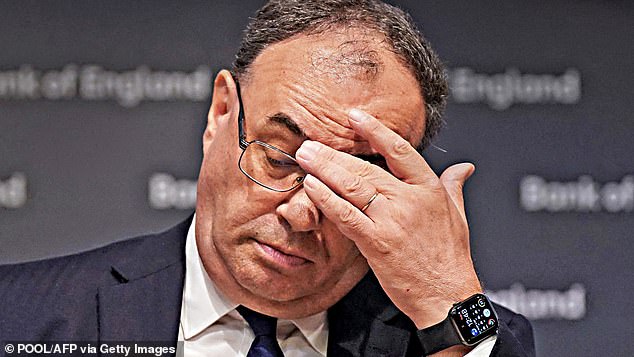 A number of commentators, as well as Bank of England Governor Andrew Bailey (pictured), suggested the figures proved leaving the EU had damaged Britain’s economy

The think-tank reassured Britons that the value of energy exports was set to bounce back this year owing to soaring prices – a small comfort as households face punishing bills this winter.

Meanwhile, it said that concerns raised about a 26 per cent fall in car exports to the EU could not be blamed on Brexit, as analysis shows there was a similar £4.6 billion fall in non-EU exports.

The biggest percentage fall in exports across sectors has been in clothing, which declined a staggering 58.8 per cent – or £3.1 billion – compared with 2019.

The report warns ‘that by blithely attributing falls in exports to Brexit, UK governments will fail to address serious long-term negative trends in UK trade’.

Last night, the report’s main author, trading expert Philip Radford, said: ‘For too long Brexit has been made a scapegoat for when things aren’t going right.

Foolishly dismissing the decline in UK-EU trade as a result of Brexit is not just incorrect, it is potentially seriously dangerous for the future prosperity of the UK.’