An out-of-control white van narrowly avoided careering into another car and nearby houses after it skidded 360 degrees across a junction on a wet road in North Essex.

Conor Smith, 29, was driving home with his brother at around 7pm in Stebbing, Dunmow, on Sunday when a white transit van spun across the road and missed their car by mere seconds.

Heart-stopping dashcam footage, taken from Mr Smith’s car, showed the moment the out-of-control van skidded sideways across the road and barely avoided smashing into Mr Smith’s car and nearby houses.

The clip begins with Mr Smith driving down a residential road in the dim evening light before overtaking parked vehicles and gradually slowing down as he approaches a junction. 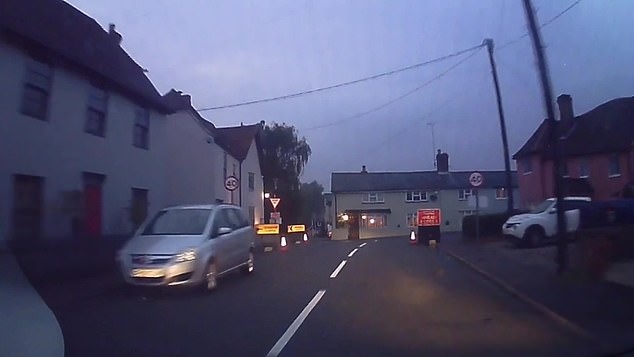 Conor Smith, 29, was driving home with his brother at around 7pm in Stebbing, Dunmow, on Sunday when they avoided being careered into by a white transit van by mere seconds 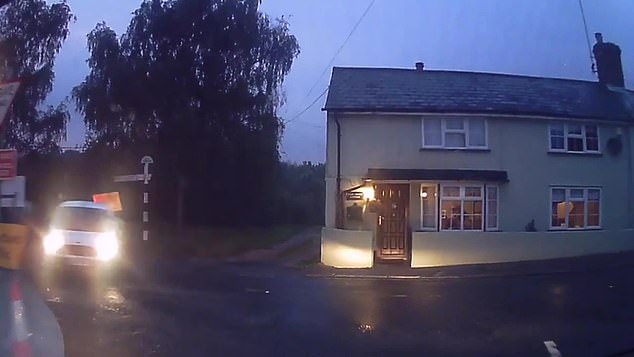 Dashcam footage, taken from Mr Smith’s car, showed the moment an out-of-control van (above) skidded across the road and luckily avoided Mr Smith’s car and nearby houses

Mr Smith, who is a firefighter, stops at the junction and at that very moment, a white Ford Transit Courier van skids into view at speed, spinning 360 degrees as it careers down the wet road.

Despite veering across the slippery road, the van avoids hitting Mr Smith’s car by mere seconds and amazingly manages not to smash into the post office or nearby houses.

Mr Smith claimed the transit van also narrowly avoided a smash-up with another vehicle, which was approaching from the right.

The van driver was said to have laughed after his out-of-control car finally came to a stop before he drove off, with a passenger also in the vehicle, according to Mr Smith.

Mr Smith speculated that the driver might have been going too fast down the small village road, or lost control when trying to do a handbrake turn.

He added: ‘The van only narrowly missed my car and another approaching from the right, it is a very narrow piece of road and he was very lucky not to hit us or the houses.

‘He didn’t stop, just laughed with his passenger and drove off.’ 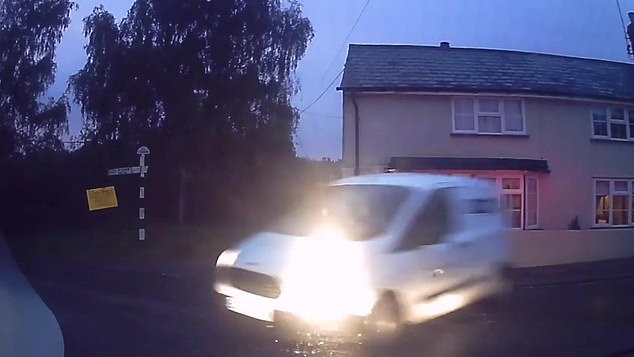 As firefighter Mr Smith stops at a junction, a white Ford Transit Courier van (pictured) skids into view at speed, spinning 360 degrees as it careered down the wet road

Mr Smith speculated that the driver might have been going too fast, or lost control when trying to do a handbrake turn on the village road (pictured) in Stebbing, Dunmow

The dashcam footage has been viewed by more than 9,000 shocked viewers, with one quipping that they must have all needed ‘new underpants’ after the near-miss.

One person commented: ‘Nowt wrong with that, it’s only someone practising their handbrake turn.’

Another quipped: ‘He misunderstood what the sat-nav meant by sharp right turn.’

And a third wrote: ‘It gets better the more you watch it!’

A fourth added: ‘New underpants all round.’

In a separate incident, police are appealing for witnesses after an elderly woman died after being struck by a MG ZS car on Chelmer Drive in nearby Great Dunmow at around 4pm on Friday.

Despite the efforts of emergency services, the woman was pronounced as dead at the scene.

Police said a 77-year-old man is helping them with their ongoing enquires.

as, car, driver, misses, narrowly
You may also like: