Drone delivery service is being trialed in Irish village

Coming to a back garden near you… movie night treats dropped in by drone: The Irish town where up to 60 deliveries of takeaways and groceries are made per day to residents

It feels like the stuff of legend: a place where you can summon anything you need, and it will descend from the heavens.

But that’s now a reality in one small town, where thousands of residents can summon groceries, takeaways, coronavirus test kits – even a hot cup of coffee – and get it all delivered to their doorstep by drone.

It’s a test of a service that could soon be coming to towns across the UK, and on Friday the Moran family showed how it works, settling down for a movie night after their snacks – popcorn, sweets, crisps and a salsa dip – had descended from the skies. 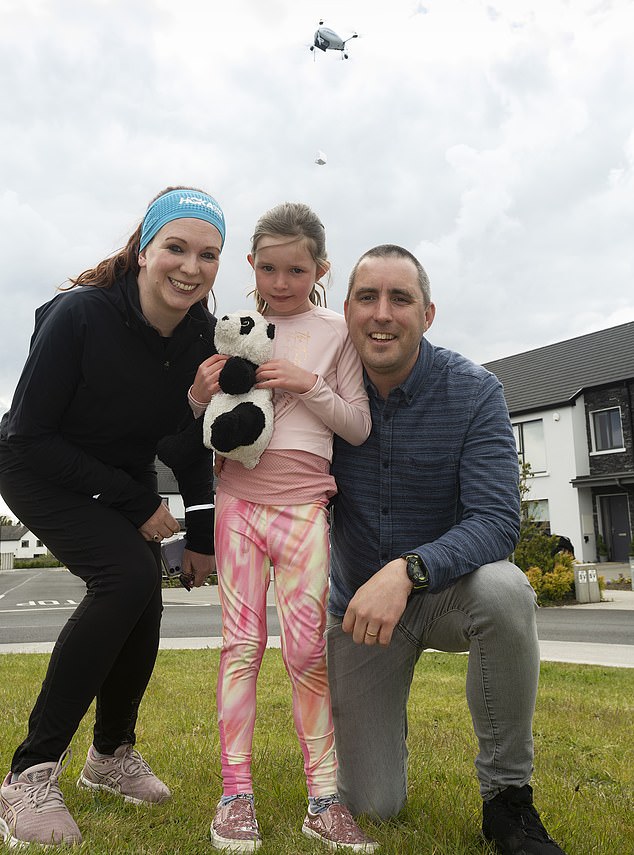 Oisin Moran, with his wife Sinead and their daughter Meabh, received a special movie night surprise from the Manna Drone Delivery service in Oranmore, Co Galway 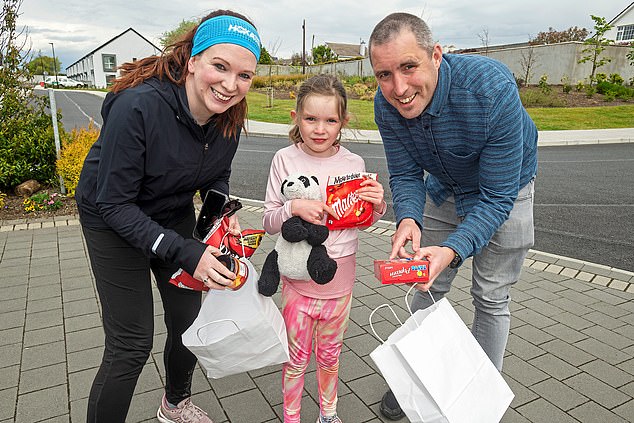 The company is able to airlift 4.4lbs of cargo within a two mile radius using two drones

TV cameraman Oisin – who was joined by his wife Sinead and their seven-year-old daughter Meabh – told The Mail on Sunday: ‘It’s a brilliant service especially for elderly people and it’s been invaluable during lockdown when people didn’t, or couldn’t, go out.’

Start-up firm Manna – as in ‘from heaven’ – uses two drones to make up to 60 deliveries a day to the 10,000 residents of Oranmore, in the West of Ireland, from partners including Tesco, Just Eat, Samsung and Ben & Jerry’s. It has raised £18 million to expand the service into the UK, with plans for the rollout to start by the end of the year.

Residents use an app to order goods weighing up to 2kg (4.4lb), which are packed inside the hold of drones. The machines can reach 50mph and fly at around 200ft.

Customers can track the rather grandly titled ‘missions’ on their app, similar to following an Uber minicab, and because aviation rules currently restrict drones to a two-mile radius of their base – in this case the roof of the local Tesco – all orders arrive within three minutes.

Once at a customer’s home, the drone uses a sensor to find a suitable flat surface on which to leave the delivery. The order then descends the last 15ft or so via a biodegradable thread which takes about seven seconds. But the company says the drop is so smooth it can deliver hot tea without spillage. It has also delivered a cream cake with the candles lit, just to prove it could do it.

Naomi Cullen, Manna’s operations manager, said favourite orders included ingredients for a roast dinner or fry-up. ‘If you need your rashers, sausages and eggs, that’s a popular one,’ she said. But other orders have been more unusual: one family paid the £3 delivery charge to get just one 50p head of broccoli, while another shopping list comprised only a melon and nappy cream. 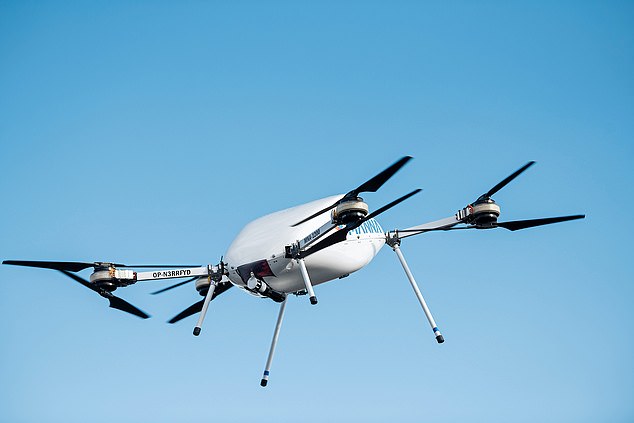 Naomi Cullen, Manna’s operations manager, said favourite orders included ingredients for a roast dinner or fry-up. ‘If you need your rashers, sausages and eggs, that’s a popular one,’ she said. But other orders have been more unusual: one family paid the £3 delivery charge to get just one 50p head of broccoli, while another shopping list comprised only a melon and nappy cream

Manna admits there has been one mishap – when a customer arranged for a surprise birthday delivery for a relative, but they weren’t home.

When expanding into the UK, the company will focus on suburban towns of 50,000 to 100,000 people – and it estimates it will eventually need around 50,000 drones to supply a tenth of the UK market.

But it will face stiff competition, with Amazon also working on drone deliveries. The US giant plans to fly packages weighing up to 5lb as far as 15 miles in the next few years. At the moment, drones must always be in the pilot’s line of sight but the Civil Aviation Authority has just approved some trials without this requirement, which would pave the way for Manna deliveries.

Mr Moran said that in Oranmore the initial novelty of the drones had worn off since they arrived in October but the service was still proving useful. ‘In the early days, people used to go out and film the drone, but not any more,’ he said. ‘After all, you don’t rush out to record a van or car dropping something off and the drones are just accepted as part of everyday life here.

‘When Meabh and I go to the playground in the middle of Oranmore we see the drones constantly going back and forth.

‘We find it hard to appreciate the service is not in every town but I’ve no doubt they’ll be everywhere in a few years.’