The Nottingham-based gang, headed by rapper Akeem Chand, 27, released videos of gang members splurging on Rolex watches and taking trips to the Caribbean.

Chand, aka Brutz, boasted about how the group needed a ‘Money Counter’ to keep track of their ill-gotten gains – while one video uploaded to YouTube revealed the location of one of their safehouses.

In a music video for the song Lifestyle, ‘Brutz’ can be seen holding wads of cash and shopping for luxury watches and what appear to be diamond-encrusted bracelets and chains.

The rapper and several others can then be seen enjoying a trip to Mexico’s Caribbean coast, complete with luxury accommodation and private yacht hire.

Other shots feature drone footage of flats which were later raided by police and found to contain drugs, weapons and cash.

The property was made all the more easier to find thanks to the gang’s high-definition aerial drone footage.

The ‘dangerous’ gang – which sold cocaine, crack cocaine and heroin across Nottinghamshire – became the subject of a covert police operation after ‘living the lives of music stars’ despite having almost no discernible legal income between them, police said.

Listening devices planted in a car caught them openly discussing the sale of drugs and shooting rivals.

Chand and six of his associates were last week convicted of a string of drugs and weapons offences following a 15 week trial.

Chand had been arrested by police following a spate of shootings across the Nottingham area, which took place in late 2018 and early 2019.

During one incident a rival gangster was shot in the neck as Chand fired multiple shots into his car as it travelled along a residential street. 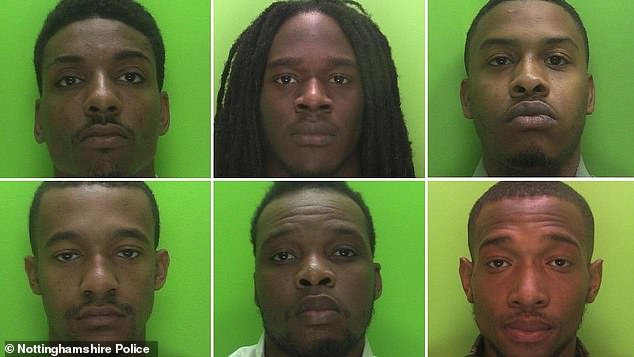 In a music video (pictured), some gang members were seen enjoying a private yacht during a trip to Mexico 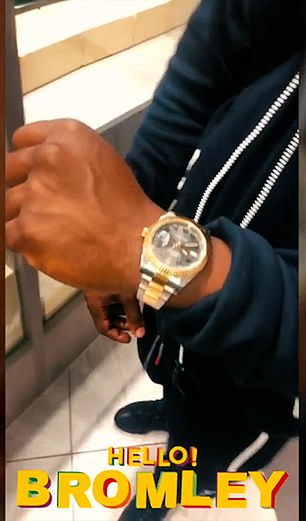 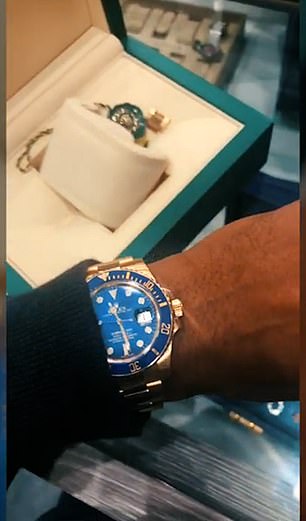 In a music video for Brutz’s Lifestyle, the gang can be seen shopping for Rolex watches 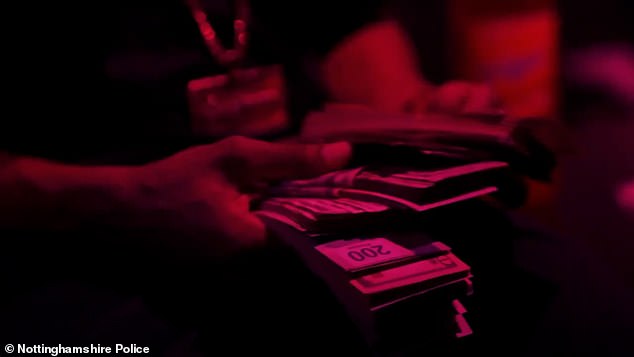 In a music video for the song Lifestyle, rapper Brutz can be seen flaunting wads of cash 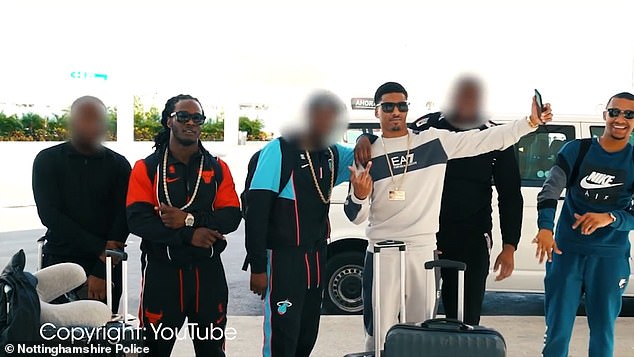 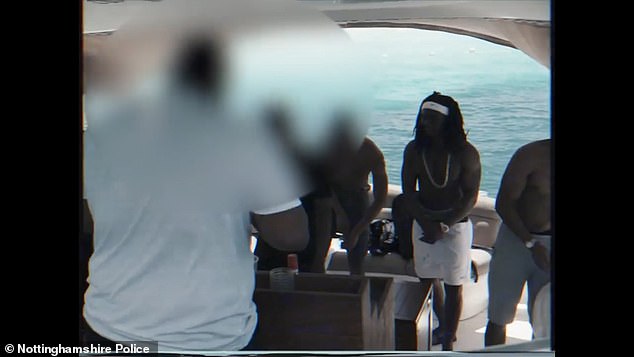 In a music video, the group can be seen enjoying a private yacht – despite having almost no discernible legal income between them 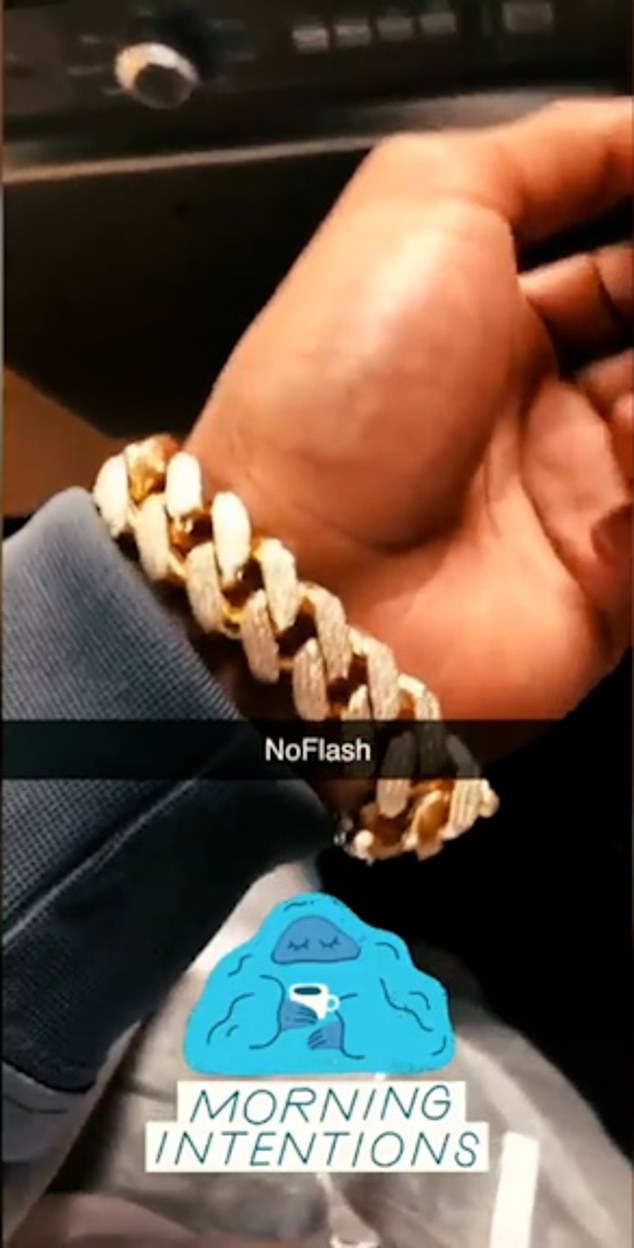 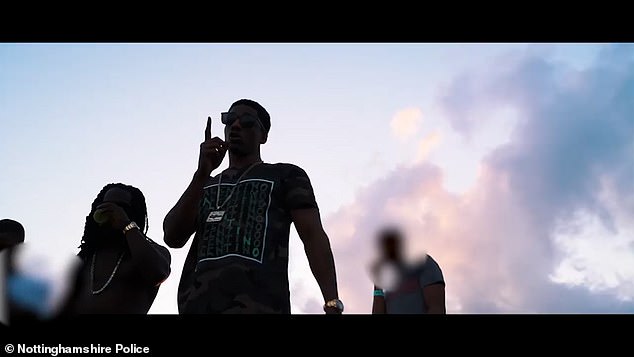 The court was told the gang was run by Chand (pictured, in one of his music videos) who controlled a ‘sophisticated and highly profitable’ network of drug lines

Detectives found the gang were ‘living like footballers or music stars’, splashing their cash on expensive jewellery, designer clothes, holidays and the production of music videos between July 2018 and June 2019.

Several members of the gang even flew to Mexico’s Caribbean coast where they strayed in a lavishly appointed private villa and even hired a luxury motor yacht.

Both were used as locations for the slick music video recorded on the trip, which eventually led to their downfall.

The court was told the gang was run by Chand who controlled a ‘sophisticated and highly profitable’ network of drug lines.

The drugs were then delivered by a network of dealers and enforcers from safehouses.

Those same safe houses were also used to store an array of firearms, which would later be used in a tit-for-tat turf war with a rival gang.

One shooting took place in Aspley, Nottingham, on December 13, 2018 when a shot was fired at a car suspected to contain rival gang members. 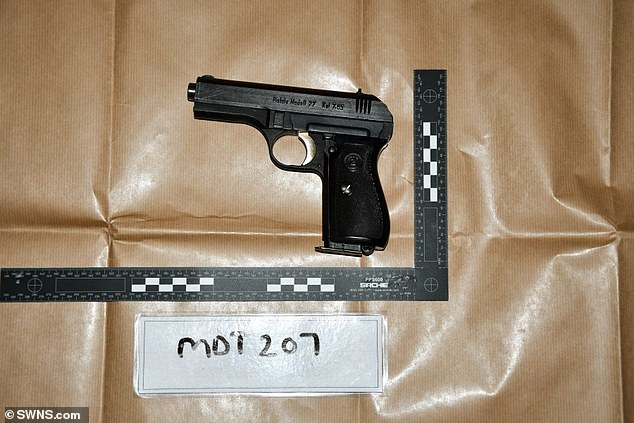 Another took place when Chand shot a 44 calibre revolver at a vehicle following a chance encounter with a rival at a set of traffic lights on May 9, 2019.

Part of the attack was captured on the victim’s dashcam.

Only a few days later on May 12 shots were fired at the empty vehicle of a gang member in an apparent revenge attack on another residential street.

A covert listening device was deployed to monitor conversations in Chand’s car – a modest Seat he routinely conducted his illicit operations from.

For several days the device recorded Chand and his associates conducting multiple deals, including discussing the best wording for a text message advertising their drugs. 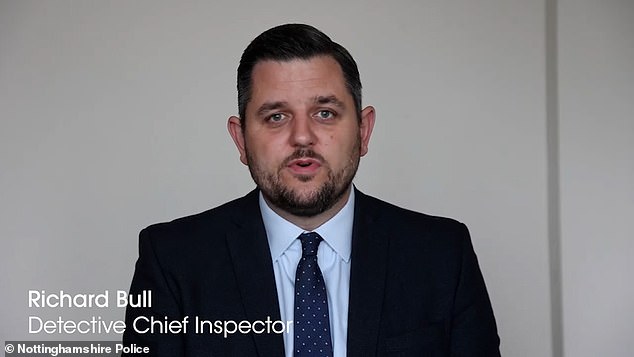 Detective Chief Inspector Richard Bull (pictured), of Nottinghamshire Police, said after the verdicts: ‘This was a very dangerous gang whose members were making huge sums of money from a wide-spread and sophisticated drug dealing network’ 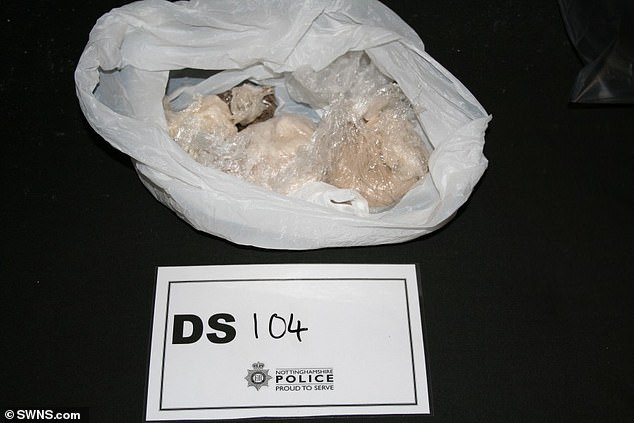 The gang were also heard plotting a revenge attack on a gang rival who had knocked one of Chand’s associates off his motorcycle.

The cycle of tit-for-tat shootings came to an end on May 27 in Aspley, when a shotgun was fired through the front window of Chand’s then home address.

Police arrested the gang and stormed their homes where they uncovered significant quantities of drugs, cash and guns.

Detective Chief Inspector Richard Bull, of Nottinghamshire Police, said after the verdicts: ‘This was a very dangerous gang whose members were making huge sums of money from a wide-spread and sophisticated drug dealing network.

‘Ultimately, however, they were undone by their own arrogance, recklessness and meticulous police work.

‘Here we had a group of young men with almost no discernible legal income between them living the lives of music stars or footballers – spending quite incredible sums on jewellery, holidays, designer clothes and the other trappings of wealth.

‘All the more incredible was the fact they made so little effort to spend their money discreetly – choosing instead to brag on social media posts about just how much of it they spending. 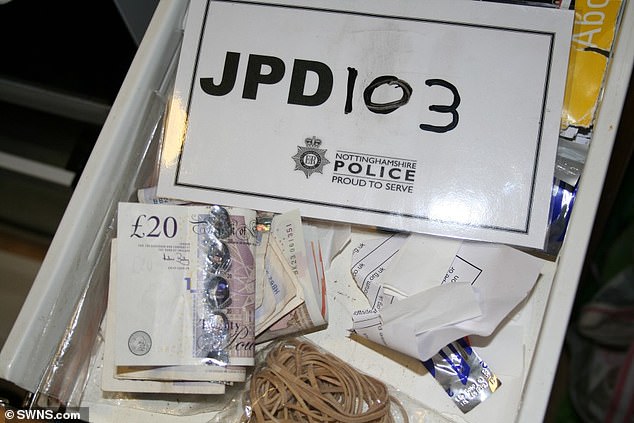 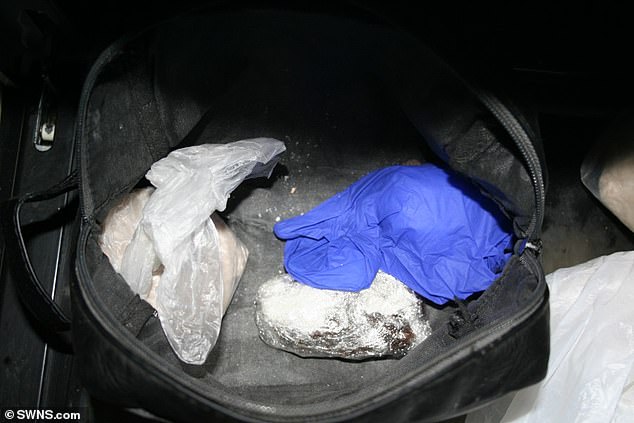 ‘It was, however, their ready use of violence that led to their undoing.

‘When guns are discharged in the street there is always a reason. In this case that reason led us very quickly to Chand and his associates, who by that time were effectively boasting openly of their drug dealing and violence online.

‘We knew exactly what they were up to but were still faced with the challenge of getting enough evidence to prosecute them.

‘Our subsequent covert investigation unearthed a treasure trove of damning evidence that has ultimately led to the men’s convictions.

‘We should be under no illusions that these are very dangerous men who thought nothing of discharging firearms in residential streets.

‘I would like to pay tribute to the witnesses that came forward and the dedicated detectives who helped to bring them to justice.

‘I want to reassure the public that the use of firearms remains extremely rare.

‘These convictions show that we will use all investigative means at our disposal to pursue those responsible for their use and put them before the courts.’

The Nottingham men had previously pleaded guilty to conspiring to supply class A and class B drugs.

Ravan Mather-Simpson, 25, also pleaded guilty before the trial to conspiracy to supply class A and class B drugs.

Another woman, Sarah Aplin, 27, of Bestwood, Nottingham, previously admitted to a charge of allowing a premises to used for the supply of controlled drug.

All will be sentenced on Monday October 25.