A 49-year-old “vigilante” who allegedly jumped in her car and chased two teenage boys accused of stealing a motorbike, resulting in a collision which sent the two teens to hospital, did not appear in person for her first court hearing on Friday. 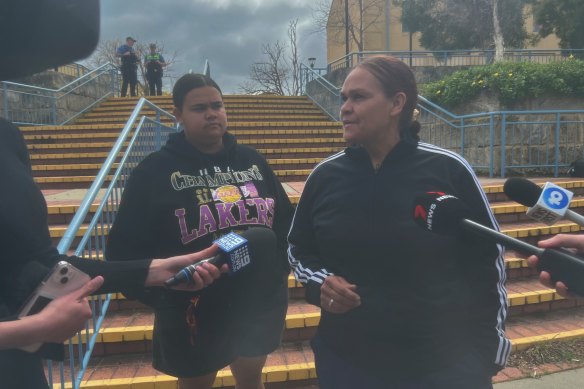 Kathy Penny said she was frustrated Debbie Bute, who allegedly chased her son through Hillarys after he allegedly stole her motorbike, did not appear in court.Credit:Holly Thompson

But her lawyer told the court she had received advice informing her she did not need to attend in person.

The magistrate said he would accept this on the basis of a “misunderstanding” but said Bute would need to come next time as she was on bail. Her case was remanded until October 21 for legal advice.

Bute allegedly saw a motorbike being stolen from her Duncraig property before chasing the accused thieves in the early hours of August 8.

Ronaldo James Cockie, 18, and another teenager, 17, were allegedly speeding down Hepburn Avenue in Hillarys on the motorbike around 4.40am, one filming on their mobile as Bute allegedly followed closely behind in a Toyota Kluger, at times on the wrong side of the road.

The motorbike and car then crashed at a roundabout and the car flipped and burst into flames, while the two teens were flung from the motorbike onto the road.

Cockie was left with severe injuries and was rushed to hospital suffering bleeding on the brain, a fractured skull and significant leg injuries. He required emergency surgery and spent 19 days in hospital.

The other teen and Bute were also injured.

Outside Joondalup Magistrate’s Court on Friday, Cockie’s mother Kathy Penny said the family had seen the video of the incident, and Bute needed to come to court and be held accountable.

Penny said her son was “doing alright” physically and was in the crisis care unit at Hakea Prison, but was still in a wheelchair and needed physiotherapy.

She said she was more concerned about his mental health, and the incident would impact the rest of his life.

“I’m just glad that he has no brain damage with everything that he went through,” she said