FRIENDS have paid tribute to a "caring" mother-of-five who plunged 150ft to her death as she tried to take a short cut down a seaside cliff.

Tahira Jabeen, who was in her 40s,fell from the perilous cliffs that form part of the famous Durdle Door landmark on the Dorset coast in front of her terrified daughter. 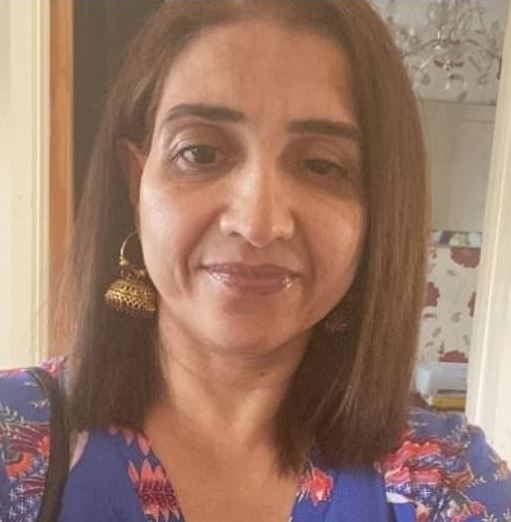 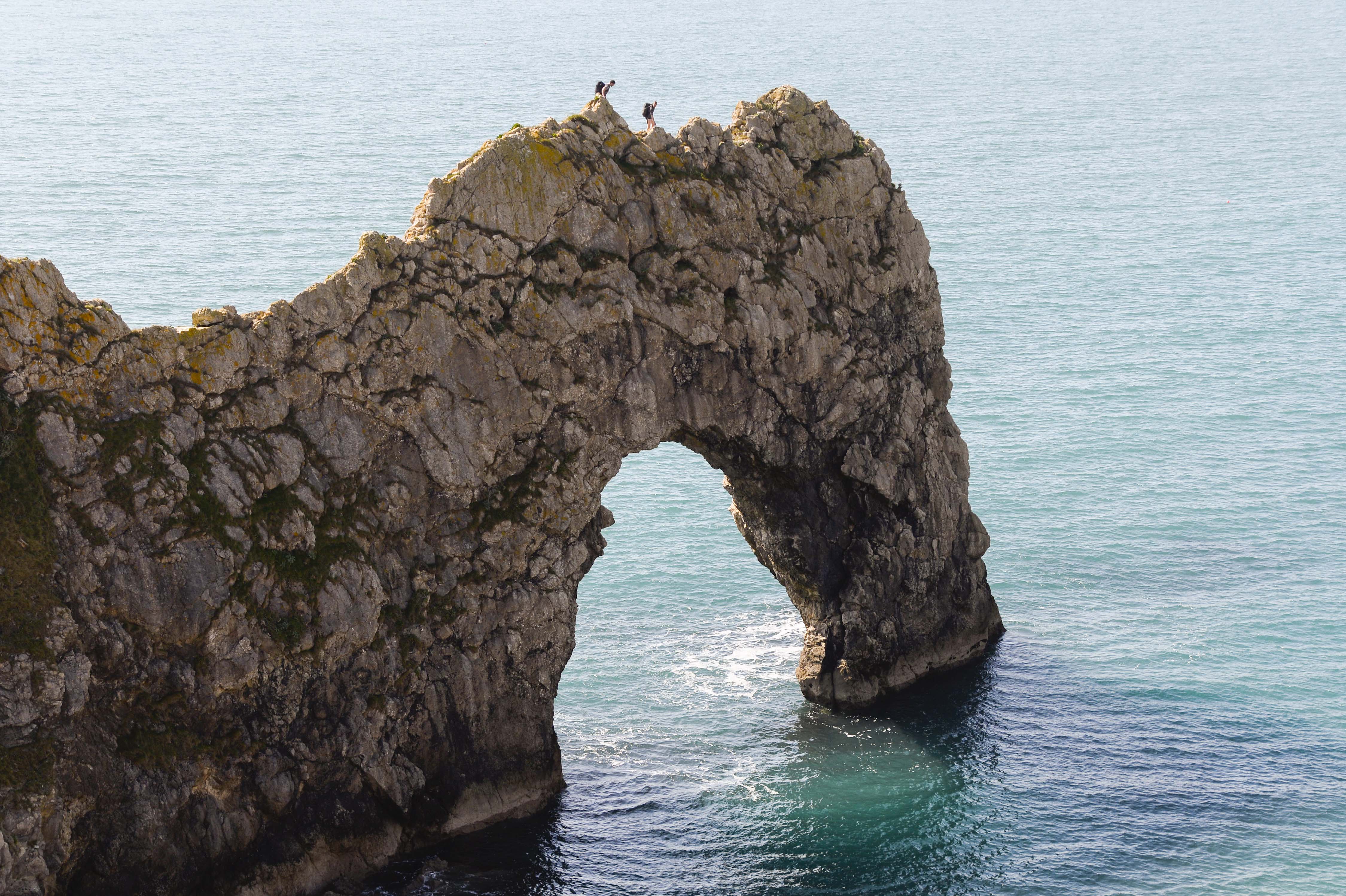 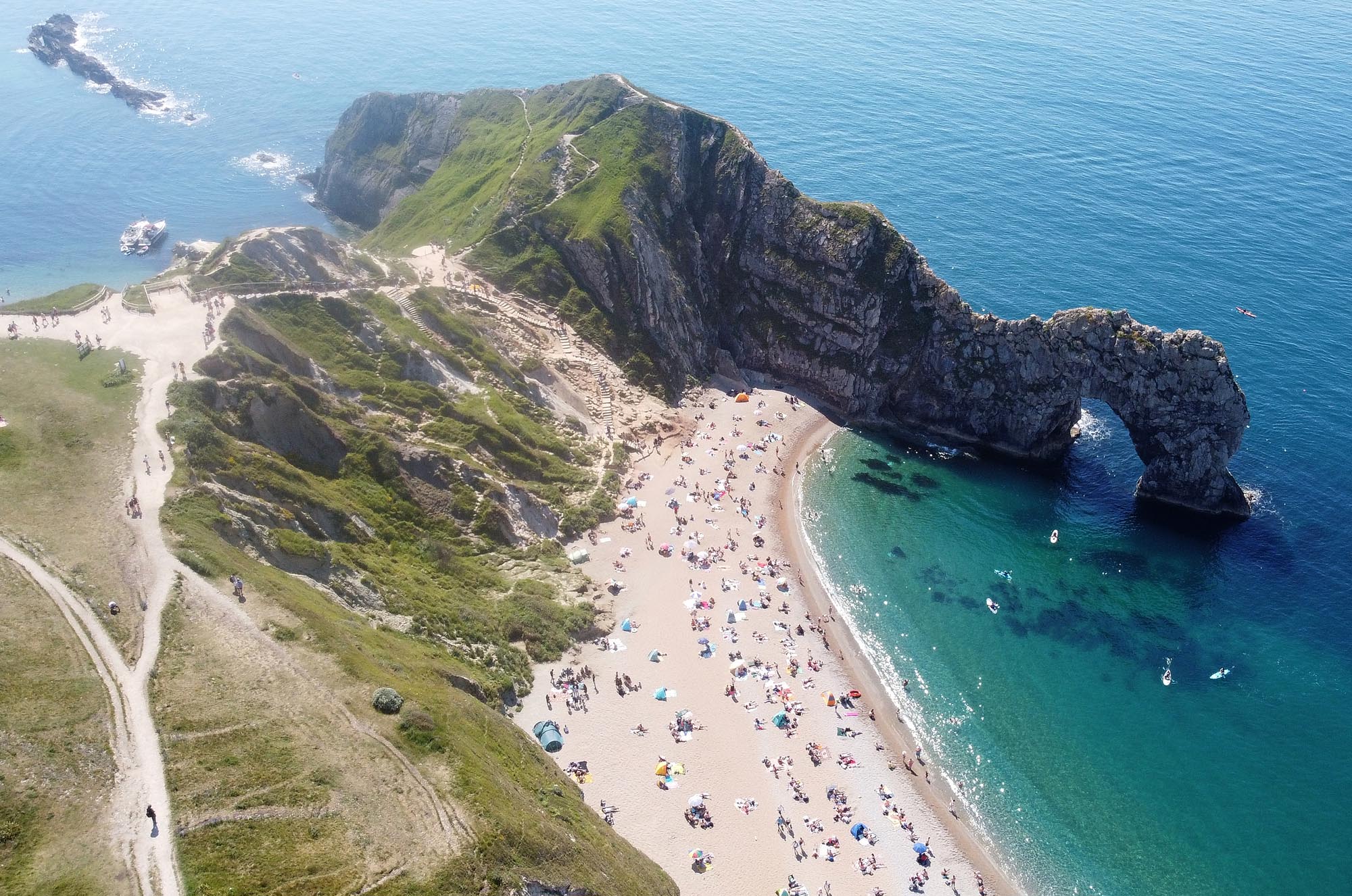 She was heard to shout out “I'm coming down” before she lost her footing on loose rocks and plunged.

Jabeen struck the rock face on the way down and landed at the bottom of the cliff at Man O' War beach.

The tragic accident was witnessed by her daughter, who was said to be aged in her 20s.

It is understood the daughter had taken a longer route back down to the beach via a path.

Now friends are remembering her as a "caring and jolly person."

A friend posted online today:  "A much loved and missed wonderful lady with a heart of gold Tahira Jabeen lost her life after falling from a cliff in Dorset while making memories with her daughter.

"Leaving behind five beautiful girls who will not be able to replace her.

"A much loved person by many. Always happy and smiling. She will truly be missed by everyone that knew her.

"In loving memory of a very dear friend and colleague, rest in peace. Gone but not forgotten."

A JustGiving page set up to support her family has so far raised more than £1,800.

It reads: "A caring and jolly person lost her life in such a tragic accident.

"A much loved and missed wonderful lady with a heart of gold Tahira Jabeen lost her life after falling from a cliff in Dorset while making memories with her daughter. Leaving behind 5 beautiful girls who will not be able to replace her.

"A much loved person by many. Always happy and smiling. She will truly be missed by everyone that knew her. In loving memory of a very dear friend and colleague, rest in peace. Gone but not forgotten."

The beach was packed with people on what was the hottest day of the year yesterday.

Coastguards and police officers rushed to the scene and kept members of the public back while paramedics tried to save the woman.

But she suffered such horrific injuries that she was pronounced dead at the scene at about 3.30pm.

Another woman, thought to be the victim's daughter, was also treated by ambulance crews for shock. 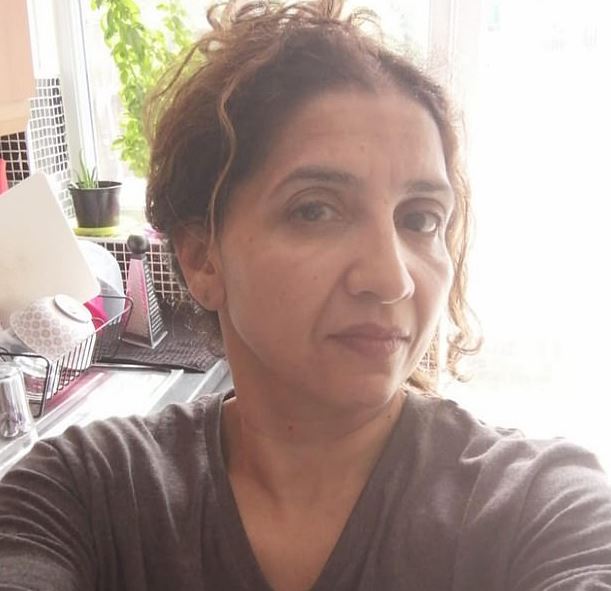 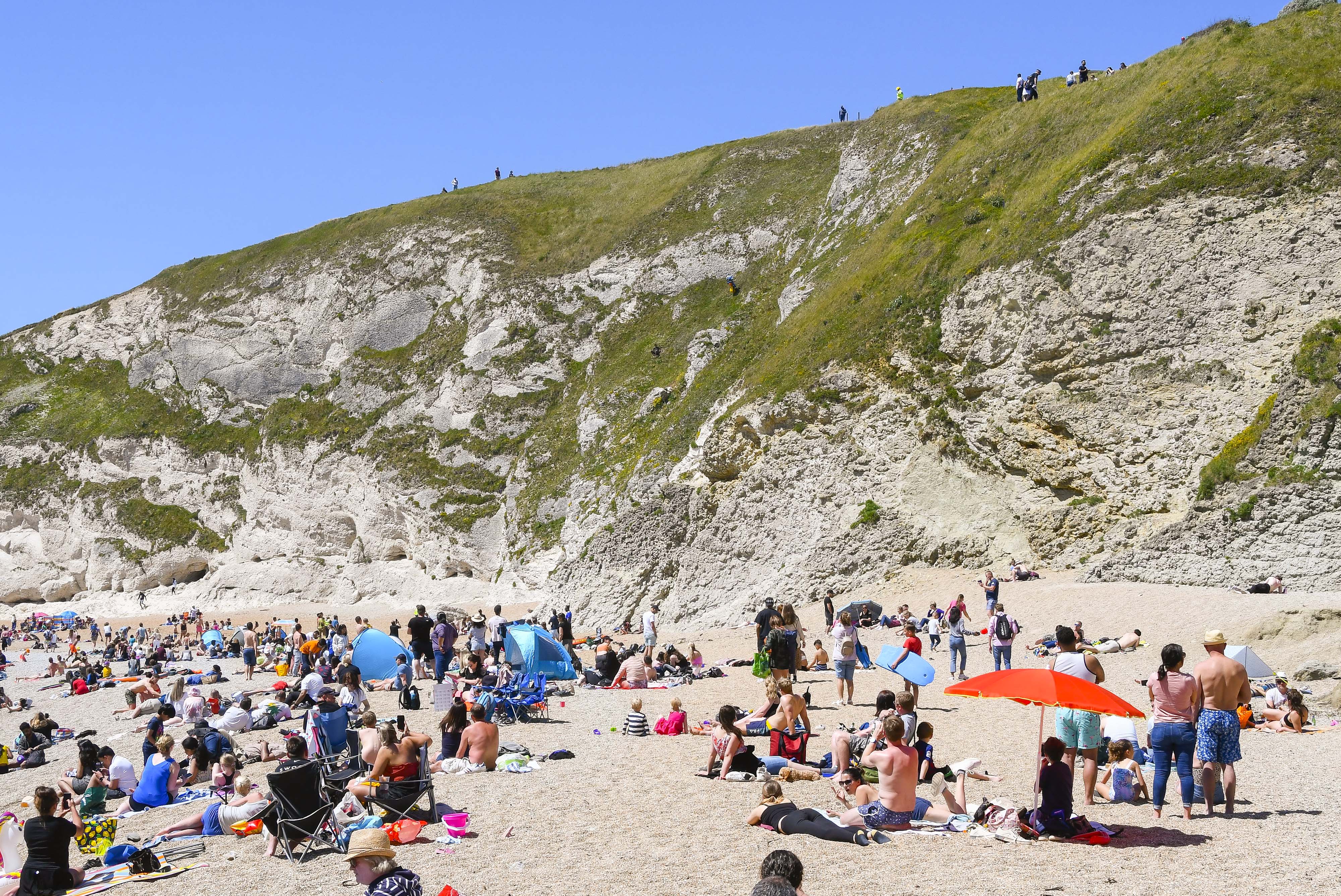 A witness said the two women had earlier climbed to the top of the 150ft cliff and were making their way down at the time.

She said: "The woman was about 20 metres down the cliff when she fell.

"She chose to climb down the rocks while her daughter took the steps.

"People on the cliff and on the beach were shouting at her to stay still but she didn't listen and carried on.

"The rocks were coming loose under feet then she just bounced down. The woman's daughter saw her fall. It is just awful."

She said: "There were 150 to 200 people on the beach at the time chilling and relaxing.

"A few people then spotted this woman who was petite with dark hair in a summer's dress carrying a beach bag walking down the grassy side of the cliff.

"The witness said the woman had been climbing for about five to ten minutes before she fell.

She added: "My partner and I were 20 metres away from where she landed and those closer rushed towards her.

"You could tell she was in a bad way and someone started CPR while others formed a human shield around her so children couldn't see what was happening.

"There were so many tears and screams on the beach. It was horrific." 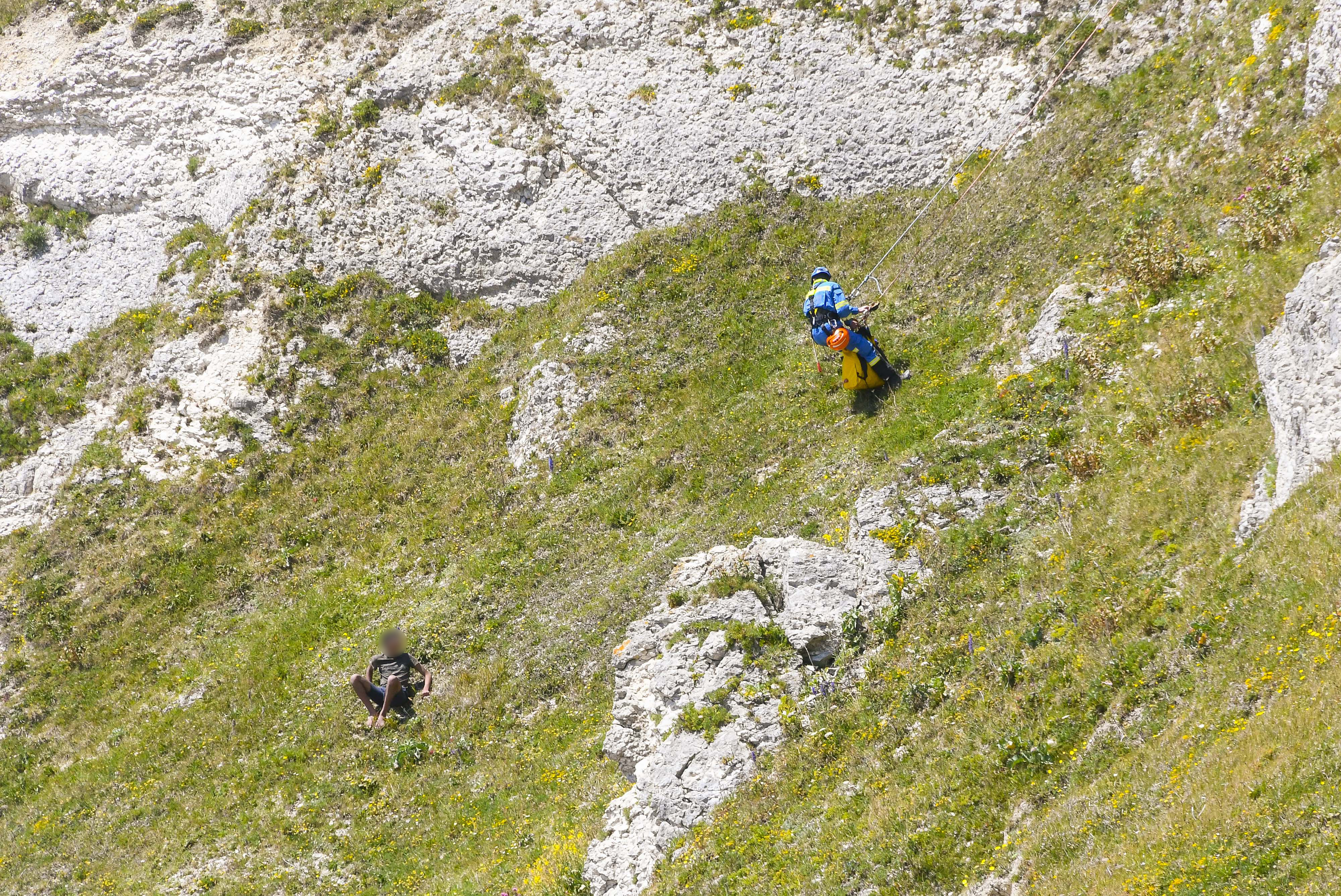 Eleanor Edwards: "I was visiting Durdle Door with my sister and we witnessed this lady fall. She was climbing down the cliff thinking she could get to the beach.

"Everyone was telling her to stop and there was nothing anyone could do. It was extremely saddening to witness."

Beth Ruby said: "I witnessed this whole event and can not get the image of her falling out of my head."

Tourist Rachel Williams said that she heard the woman shout “I'm coming down, I'm coming down” and that many people on the beach told her to stay where she was.

Witness Michelle Attard saw the aftermath of the accident as she left the beach on the Durdle Door side of the cliff.

She said: "We saw the unfortunate sight of the poor woman lying at the bottom of the cliff at Man O' War beach with a couple of paramedics around her.

"There was another lady who was laying there being tended to, she looked quite traumatised.

"There was also a lady with two children who seemed quite erratic and said the person involved had tried to take a short cut rather than the actual stairs down to Man O' War beach, climbing over the fence and going down a very, very steep cliff.

"It was a very, very unfortunate mistake."

James Weld, from the Lulworth Estate, which owns the land around Durdle Door, said the woman ignored warning signs telling people not to climb the cliffs.

He said: "The reports we have received would suggest that this was a tragic accident as a woman attempted to climb down the cliffs above Man o' War beach, despite many endeavouring to call to her to stop and stay where she was.

"Whatever the circumstances, such a tragedy affects us all and our hearts go out to her family.

"Our car parks and routes to the coast have warning signs to stay away from the cliffs and to avoid sitting directly beneath them. We would re-emphasise our safety messages for visitors to respect the inherent risks of our natural environment whether the sea or the cliffs themselves.

"Far too regularly warning signs are ignored, even when reminded by our Rangers, on occasions leading to unnecessary and tragic consequences when they have come to enjoy the Dorset coastline."

In recent years the Durdle Door landmark on the Jurassic Coast has become a hugely popular with thrillseekers, selfie-takers and Instgrammers as well as beachgoers.

Last summer two young men were seriously injured while tombstoning 200ft off the top of the rocky archway.

In April, two base jumpers were slammed for filming themselves making the same jump into the sea using parachutes.

A selfie-taker who risked his life to get a picture of himself perched on top of the same cliffs where yesterday's tragedy occurred also came in for criticism.

And two weeks ago a teenager had to be rescued by coastguards after getting stuck climbing down the steep grassy cliff above Durdle Door.

A spokeswoman for Dorset Police said: "At 3.07pm Dorset Police received a report that a woman had fallen from a cliff at Durdle Door near Lulworth.

"Officers are attended together with other emergency services colleagues. Sadly, the woman was pronounced dead at the scene.

"Officers are investigating the circumstances of this tragic incident."

A spokesman for the Maritime and Coastguard Agency said: "Lulworth and Kimmeridge Coastguard rescue teams, along with the coastguard helicopter from Lee-on-Solent were sent along with South Western Ambulance and Dorset and Wiltshire Fire and Rescue Service and Dorset Police."

A spokeswoman for Dorset and Wiltshire Fire and Rescue Service confirmed that fire crews from Bere Regis, Dorchester and Weymouth were at the scene to support emergency services.

She said: "We were called at 3.14pm after reports that someone had fallen from height at Man O'War beach.

"We have crews from Bere Regis and Dorchester in attendance, along with a technical rescue team from Weymouth."

A spokesperson for Dorset Police said her next of kin had been informed and officers were conducting enquiries on behalf of the Dorset coroner.

They also conformed that there were no suspicious circumstances surrounding her death.