Middle-class eco-vandal, 62, admits using lentils to deflate the tyres of 10 SUVs a night… even though the mother-of-three used to drive one herself

A small, female figure emerges from the shadows in the fading light and crouches beside a parked car.

She swiftly takes a rucksack from her back, removes something from within and turns her attention to the wheel in front of her. Less than a minute passes before she moves towards the back of the vehicle, repeats the process and disappears.

It is only the following morning when the owners of all the cars she has targeted try to drive away that they discover what has happened — each vehicle has a pair of completely flat tyres.

Plans for the day will have to be put on hold. People will be late for work, for school — vital hospital appointments may even be missed.

Of course, the worst-case scenario is that they fail to notice at all and set off in the unsafe vehicle, putting their lives and those of other road users at risk.

Until now, those behind the attacks have largely let their handiwork do the talking.

The eco-warriors, who call themselves the Tyre Extinguishers, target sport utility vehicles (SUVs). Their aim is to deter motorists from buying cars that they say, because of the size and weight, are particularly damaging to the environment and dangerous to pedestrians.

And the early signs are that, as with the eco-zealots of Extinction Rebellion, their direct action is driving people to distraction — away from, rather than towards, their green cause. 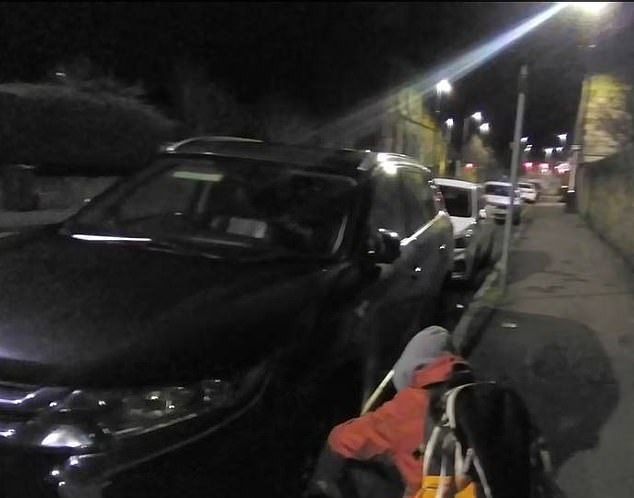 The Tyre Extinguishers are a group of anonymous eco-warriors who target sport utility vehicles (SUVs). But one activist, ‘Anna’ has decided to speak out to argue the case of her chosen cause

What if the SUV-owner is disabled? Or has three young children whose car seats won’t fit across the back seat of a standard-sized car? Or if it’s hybrid or electric?

How those whose daily lives have been disrupted by the Tyre Extinguishers would love to have it out with those responsible.

Well, step forward ‘Anna’, an activist who this week emerged from the shadows to argue the case of her chosen cause.

‘When I started, I was really shocked at how many SUVs there are, and so I calculated if I do ten a night for five nights a week, I would manage to do more than 2,000 in a year,’ the well-spoken 62-year-old proudly told me this week. ‘I started in September and have done nearly 100.’

Were her actions not so infuriating, the way in which this middle-class, semi-retired mother of three describes her entry into the world of eco-activism would be amusing.

Living in an affluent corner of West London, she says she became increasingly aware over the years of the number of SUVs clogging the capital’s streets.

‘I just kept seeing cars getting bigger and bigger,’ she says. ‘It angered me because the cars are releasing carbon emissions and polluting the area around me and I can’t do anything about it.’

A decade ago, these vehicles accounted for about 6 per cent of all cars sold in the UK. Today, one in five cars sold is an SUV.

For a moment, Anna considered buying stickers to place on offending cars. Then she heard of the Tyre Extinguishers’ campaign.

On its anonymously-run website, advice is given on how to deflate tyres and leaflets are supplied for printing and leaving on windscreens, explaining why the car has been targeted. Campaigners are told how to use a lentil or piece of gravel to slowly deflate a tyre. 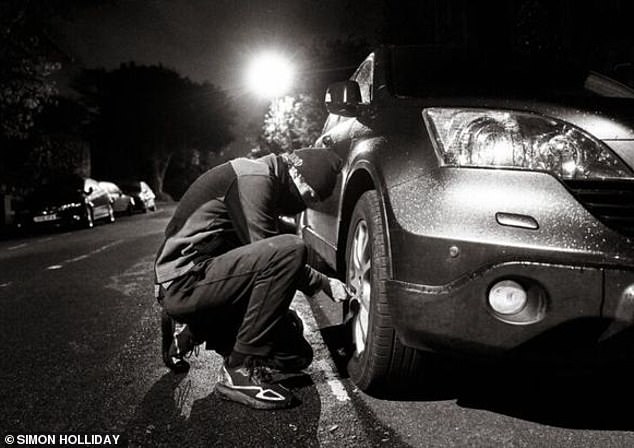 The Tyre Extinguishers’ aim is to deter motorists from buying cars that they say, because of the size and weight, are particularly damaging to the environment and dangerous to pedestrians

And so, one evening in September, Anna headed off on her bicycle. Like all master ‘criminals’, she went prepared. On her back was a rucksack loaded with a stash of leaflets and a pill-bottle filled with yellow split lentils, which she would normally use to make dhal.

It was only when she was kneeling nervously by her first tyre that she discovered her store-cupboard sabotage tools, the yellow lentils, would not do the job. They were too large.

‘I went back to the website and saw they said green lentils,’ she explains. ‘So I got them instead.’

While her next sortie went to plan, Anna admits she was anxious.

‘I was worried that if I was crouched on the ground trying to get a valve cap off, someone might come and tower over me.’ What would she do if that happened, I ask? ‘I would say: “I don’t want to be doing this, your car is too big, you need to get a smaller one,” ‘ she says.

‘If SUV owners feel so angry about having a tyre or two deflated, it may not just be due to the temporary inconvenience but that underneath they know what they are doing is wrong and don’t like having it pointed out.’

Quite how that would go down with an irate motorist is anyone’s guess. And her argument that having a few flat tyres is no big deal would, I imagine, be even less well received.

‘If I have caught you out at a bad moment by letting down your tyres you are not helpless,’ she says. ‘You could get an Uber, a taxi. 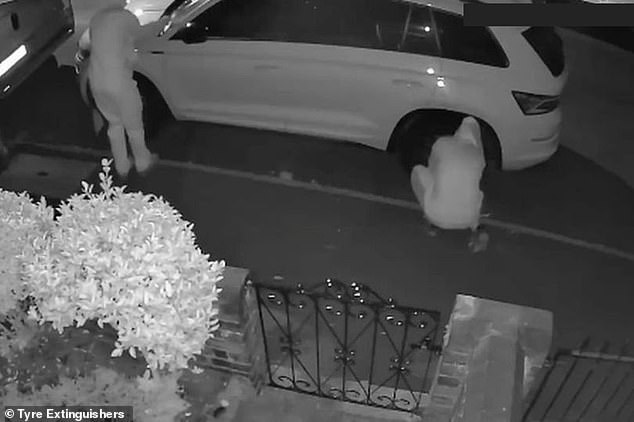 On its anonymously-run website, advice is given on how to deflate tyres and leaflets are supplied for printing and leaving on windscreens, explaining why the car has been targeted

‘It’s not like I haven’t experienced those sort of things myself. I have had three bicycles stolen in the last three years so I know what it is like to be inconvenienced — and I think the inconvenience they are causing the rest of the world is far greater.’

But in the real world — in the midst of an economic crisis — don’t people just want to get on with their lives, to earn a living, to get their kids to school? Not to have to shell out for an Uber while sorting out two flat tyres. But maybe it is easier to be idealistic when, like Anna, you are single, semi-retired and living in a flat in a nice part of London.

In those circumstances, and with three grown-up children, getting by on a bicycle or public transport is no great hardship.

She bridles: ‘That is ridiculous, it’s not like I haven’t had to work all my life and be at a certain place at 9am each day . . . so it wouldn’t be a fair picture to say I have had an easy life, so this is indulgent.’

But what about when she was younger? Not only does it emerge that Anna did in fact own a car — but that it was a Toyota Rav4, just the sort of SUV she is now targeting.

‘I did have a car when my children were young,’ Anna admits. ‘I lived for 20 years in Wiltshire and we lived down a dirt track and used to pull horses in a trailer.’

Very pleasant. But isn’t it rather hypocritical? Anna refutes the suggestion, claiming that her SUV, which she got rid of on moving to London a decade ago, was smaller and lighter than the newer ones.

‘I have looked it up — it is half the weight of the new cars,’ she says. ‘This was a car that could get us through snow and down anything. It’s not like the SUVs of today and I didn’t have it in London. If I was in London I would be on a bicycle, or moped, or use public transport.’

Even with three children? ‘The toddler stage is not that long,’ replies Anna. 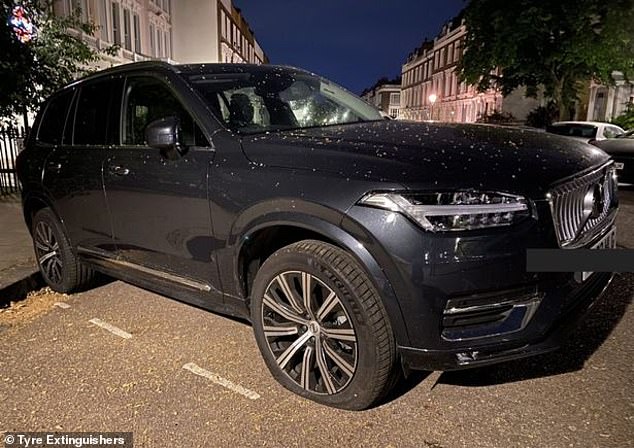 As a father of three, I bite my tongue and move on to ask about whether there are any SUV-owners she won’t target.

‘I have been about to do a car and seen it has a disabled card, so I don’t do that,’ she says.

What about the growing number of electric and hybrid SUVs, which will have lower emissions than smaller petrol or diesel vehicles?

She says that while she tries to avoid them, their extra weight, the dust from their brake pads and the rubber from tyre wear all increase environmental pollution.

‘The only thing I worry about is that someone is going to get in a car I have just done and go off down the motorway,’ she says.

‘So I do it at the end of the day on a sleepy street. I put the leaflet on each and always put it in front of where the driver sits.

‘I don’t want to be doing it and I don’t enjoy it, but it’s an extreme reaction from desperation. If the Government won’t do anything then what else can we do?’

Anna tries to target a few SUVs each night on the way back from work, in the early evening.

‘I find it the easiest way of fitting it in,’ she says, as casually as someone talking about delivering the parish magazine. ‘It takes me about an hour to do ten. I can’t afford more time.’

A former TV scriptwriter, she now has part-time jobs, but declines to say what they are. Anna is not her real name and, while the Daily Mail is aware of her true identity, she only agreed to speak on condition of anonymity.

She accepts that if caught red-handed, she could be charged with criminal damage, maybe jailed. It is a risk she is prepared to take.

In fact, she wants to see more people like her. ‘We need an army of late-middle-aged women.’

An army equipped not just with a sense of unwavering self-belief, like Anna, but with a bag full of the right type of lentils as well.