Elon Musk has been called Putin's 'useful idiot.' Here are 4 other powerful figures who have parroted Kremlin talking points. 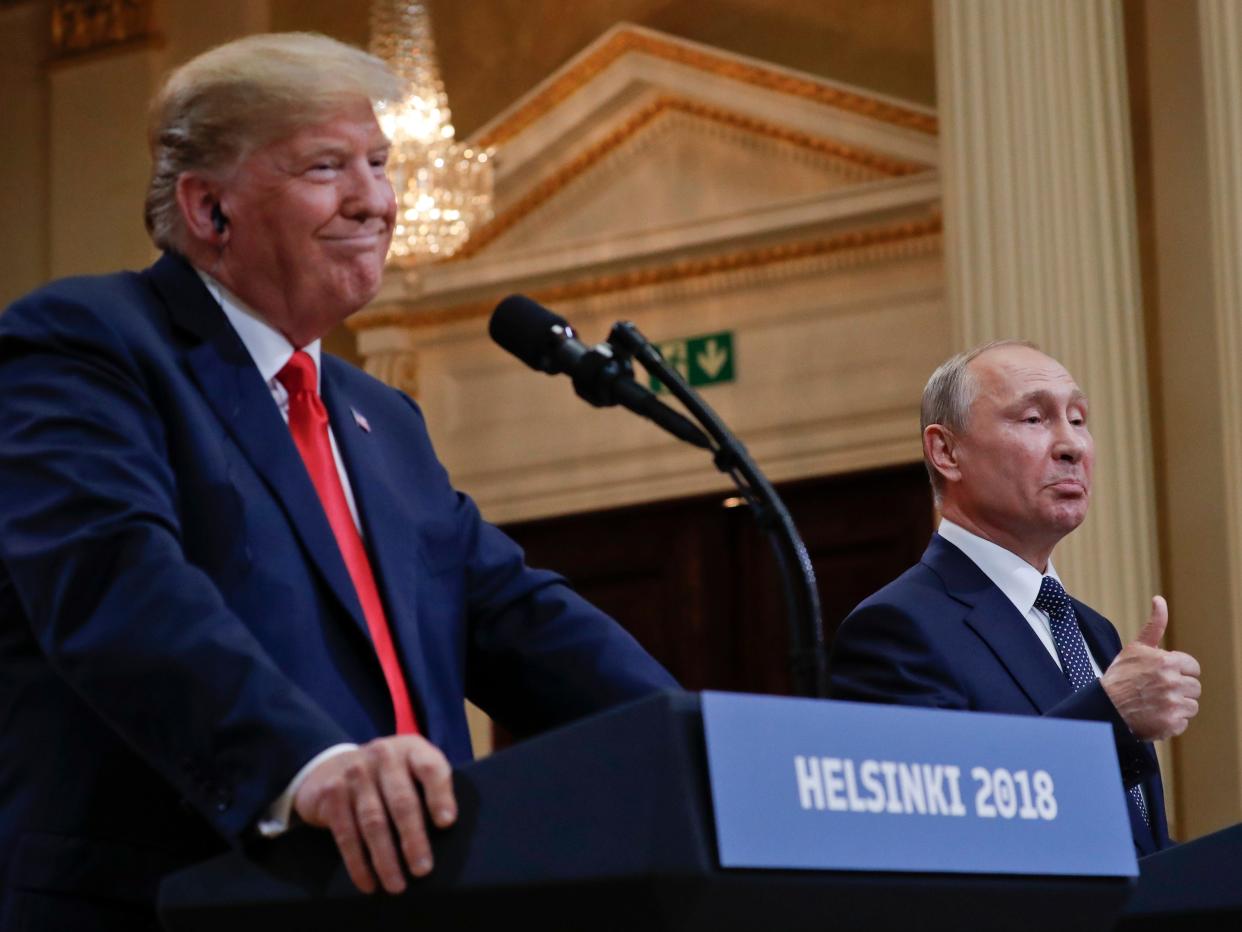 'A useful idiot'Russian President Vladimir Putin and his regime are well known for spreading propaganda about the war effort in Ukraine — but they've also had help disseminating their messages from influential and powerful public figures.Among them are Elon Musk, the Tesla CEO and billionaire who is known for sharing his takes on just about any topic on Twitter — which, notably, he owns as of last week.Puck's Julia Ioffe, a journalist and expert on Russia, wrote last month that Musk has been "simply acting as a messenger for the Kremlin.""Musk, who thinks of himself as an original and iconoclastic thinker who doesn't bow to authority, is acting as a carrier pigeon for a dictator purposely bombing civilians," she said, adding he is "normalizing" Putin's message and "adding nothing of his own except his imprimatur and legitimacy to ideas that are not his.""And what do we call someone who does that?" she continued. "A useful idiot."Musk is hardly alone among powerful figures repeating Putin talking points. Here are five, including Musk. 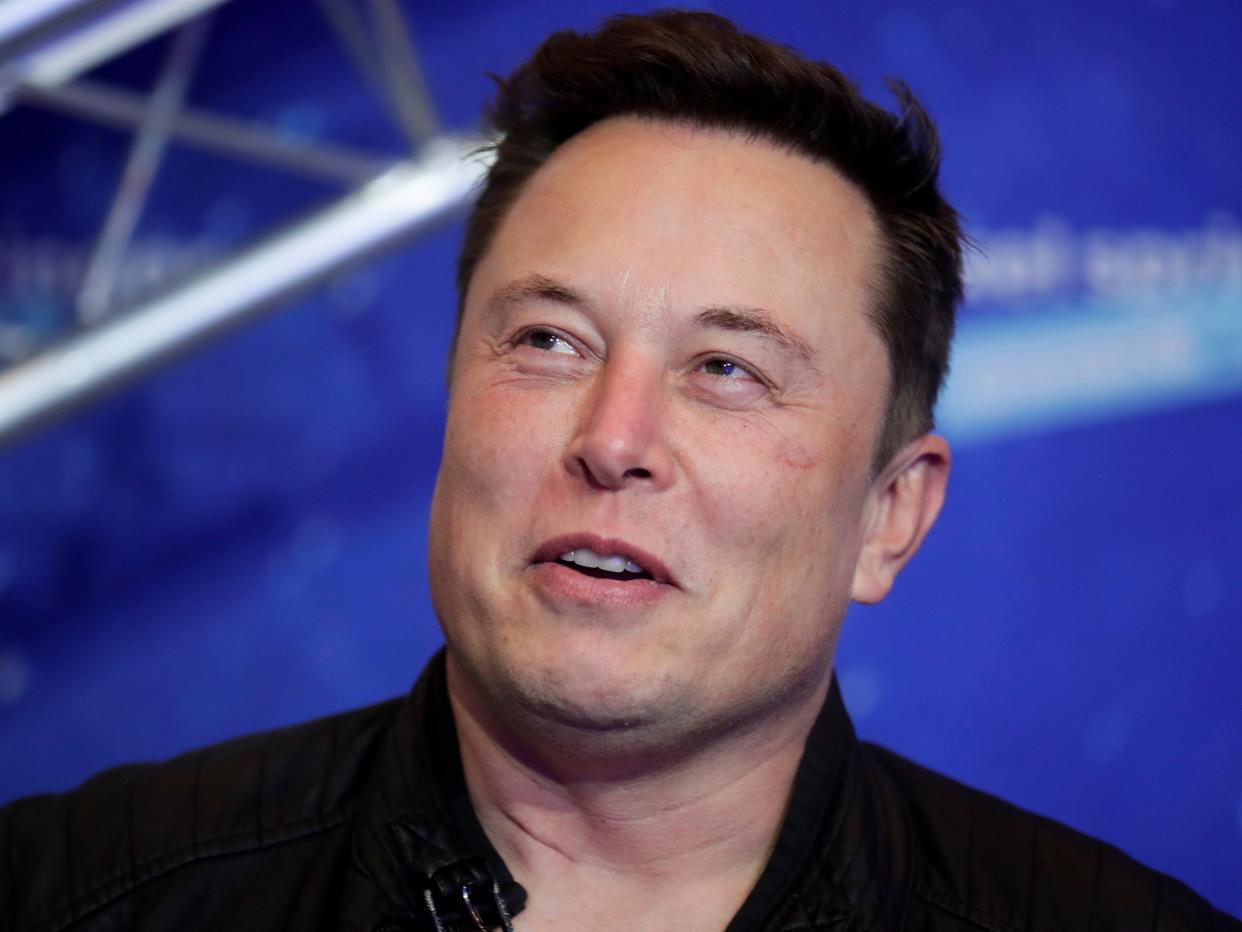 On October 3, Musk tweeted a poll suggesting a Ukraine-Russia peace plan. It included holding elections in four Ukrainian territories that Russia claimed to have annexed in a move that was widely decried as illegitimate and illegal. It also suggested Crimea, which Russia has illegally occupied since 2014, be acknowledged as part of Russia, repeating a Putin claim about the peninsula's history.

The plan also involved Ukraine remaining neutral and a water supply to Crimea being assured.

Musk's peace plan was so specific to water rights in southern Ukraine that one leading Russia analyst said it had the Kremlin's fingerprints on it. Musk denies speaking to Putin.

That analyst, Fiona Hill, a foreign affairs expert on Russia who served in the Trump White House, has said Musk is "transmitting a message for Putin."

Musk's tweet was widely panned, sparking harsh criticism from Ukrainian officials, including President Volodymyr Zelensky, who suggested the billionaire was supporting Putin. But Musk has continued to chime in about the war, including in a tweet emphasizing the importance of Crimea to Russian national security.

According to one account, Musk spoke to Putin prior to sharing a Twitter poll with peace conditions favorable to Russia and defended it as necessary to prevent a nuclear war, which Putin and other Russian leaders have repeatedly threatened in apparent attempts to limit support for Ukraine.

Hill told Politico last month she thinks Russia is using influential figures like Musk to suggest ideas for ending the war that would satisfy Putin: "Putin plays the egos of big men, gives them a sense that they can play a role. But in reality, they're just direct transmitters of messages from Vladimir Putin."

Musk did not respond to Insider's request for comment.

That largely remained the same after Russia launched its unprovoked invasion of Ukraine. While most of the world was condemning the attack, Trump lauded Putin's justification for invading as "genius" and "savvy."

Last month, Trump appeared to take the blame for the invasion away from Putin and place it on US leadership — exactly where the Russian president says it belongs. Trump has also tried to score political points off Putin's invasion, claiming without basis that it would not have occurred if he was still president.

"They actually taunted him, if you really look at it, our country and our so-called leadership taunted Putin," Trump told right-wing network Real America's Voice. "I would listen, I would say, you know, they're almost forcing him to go in with what they're saying. The rhetoric was so dumb."

Putin has tried to blame his invasion of Ukraine on Western leaders, and the eastward expansion of NATO, framing it as a defensive operation intended to save the Russian people and their way of life — and Trump's comments fall directly in line with that narrative. Indeed, Putin has claimed that Ukraine is not a real country and tried to remove its elected leadership, while also trying to pin blame on the West.

Trump also pushed a Ukraine-Russia peace deal after Putin threatened the use of nuclear weapons, playing into Putin's plans in a way that some experts described as "dangerous."

A spokesperson for Trump was not immediately available for comment. 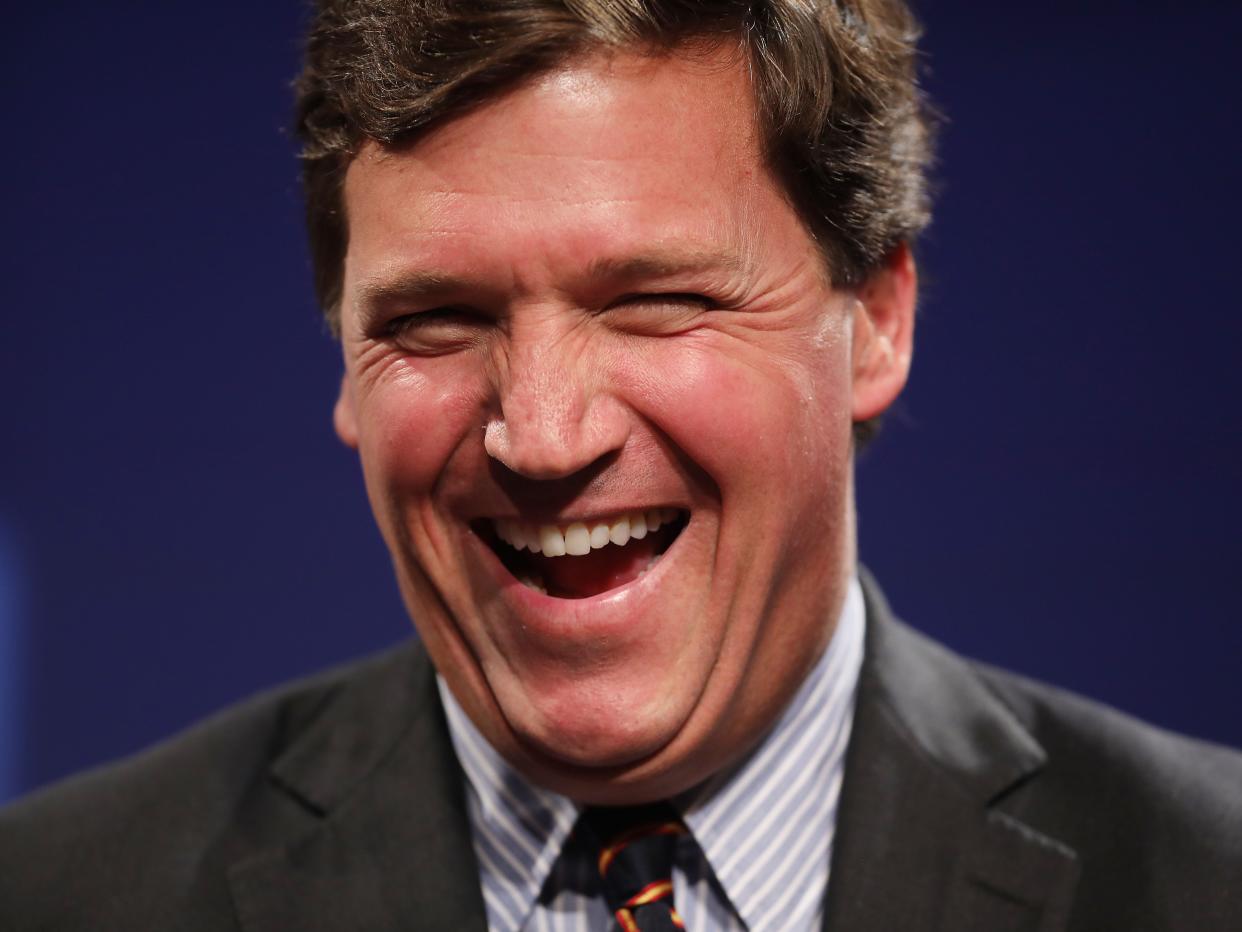 Fox News host Tucker Carlson has frequently given a huge platform to Putin's talking points by sharing them on air during his TV show, one of cable news' most-watched shows. On the cusp of the invasion, Carlson devoted a 15-minute segment to talking about how the US should not care about the Russia-Ukraine conflict.

In line with the Kremlin's messaging, he claimed concern over the conflict was not about protecting Ukraine but because Democrats "want you to hate Putin" and that NATO doesn't want Russia to exist. He claimed NATO's "one and only goal is to hold back the development of Russia."

Putin has long vilified NATO, a Western collective defense alliance intended to deter aggression in Europe and that has expanded to share more borders with Russia. Putin's invasion prompted Finland, which shares a huge border with Russia, to abandon its longtime stance and seek NATO membership.

Immediately after the invasion, Carlson acknowledged Putin and Russia were to blame but continued spreading their messages. Mother Jones reported in March a leaked memo showed the Kremlin even instructing Russian state media to play clips from Carlson's show "as much as possible."

Carlson has at various points defended Putin and downplayed the threat posed by Russia, repeated unsubstantiated claims endorsed by the Kremlin that the US was behind the Nord Stream pipelines sabotage, and falsely said the US is only providing aid to Ukraine as "payback for the 2016 election."

Fox News did not immediately respond to a request for comment. 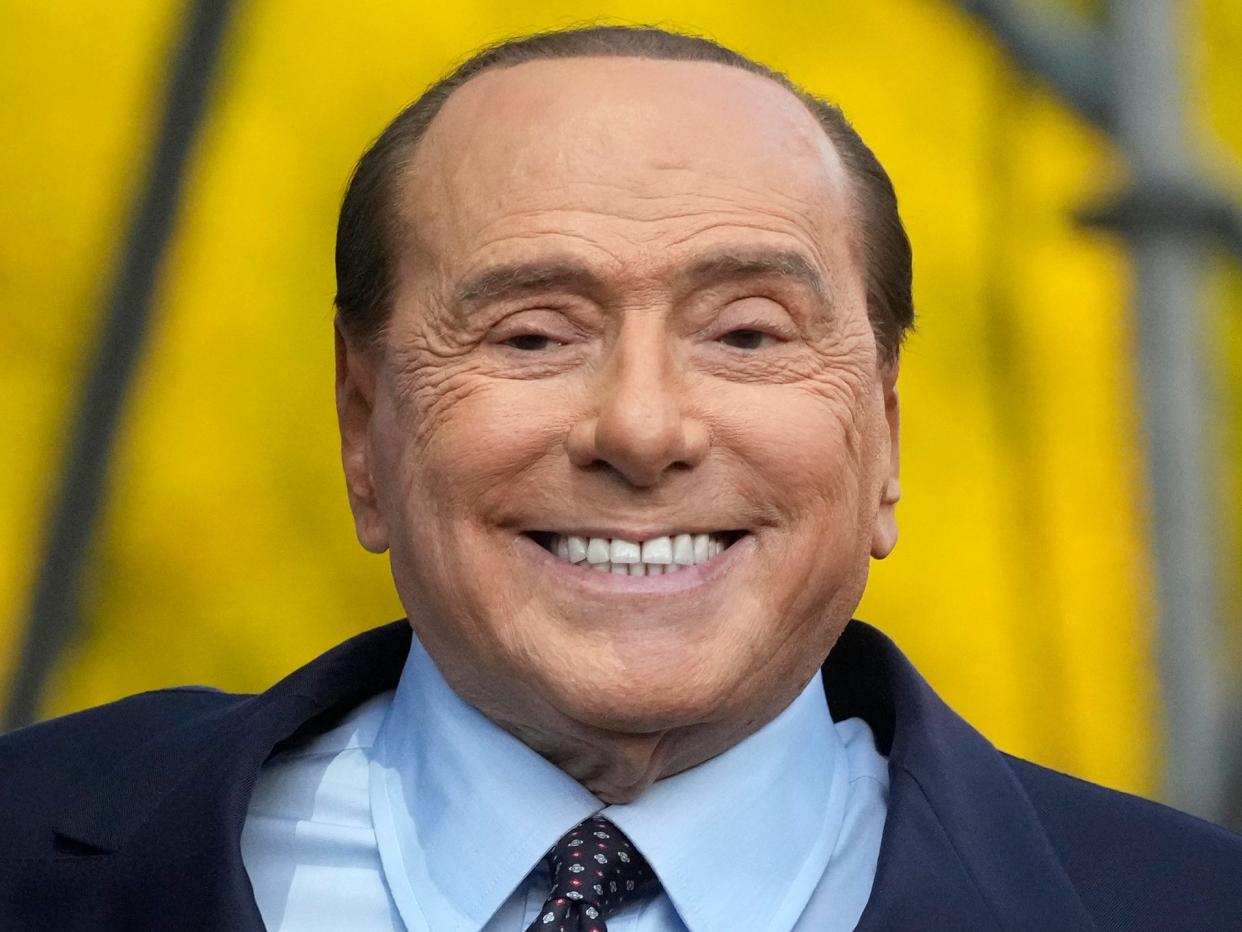 Silvio Berlusconi, the former prime minister of Italy, has also recently been captured repeating Putin-approved messages about the conflict, prompting his own party's leadership to instruct him to back off.

Berlusconi has also been accused in the past of colluding with Russian energy companies to reap major profits. In 2010, messages leaked by WikiLeaks showed State Department officials suspected Berlusconi was "profiting personally and handsomely" from secret deals made with Putin in which he was promised a large cut of energy contracts. The messages showed US officials had directed embassy staff in Rome to seek out intelligence related to the allegations.

Though the men were known to be close, it was the first allegation of financial ties between Berlusconi and Putin.

Reports on Berlusconi's recent comments came as a right-wing coalition took power in Italy, led by far-right leader Giorgia Meloni, who has been steadfast about supporting Ukraine. 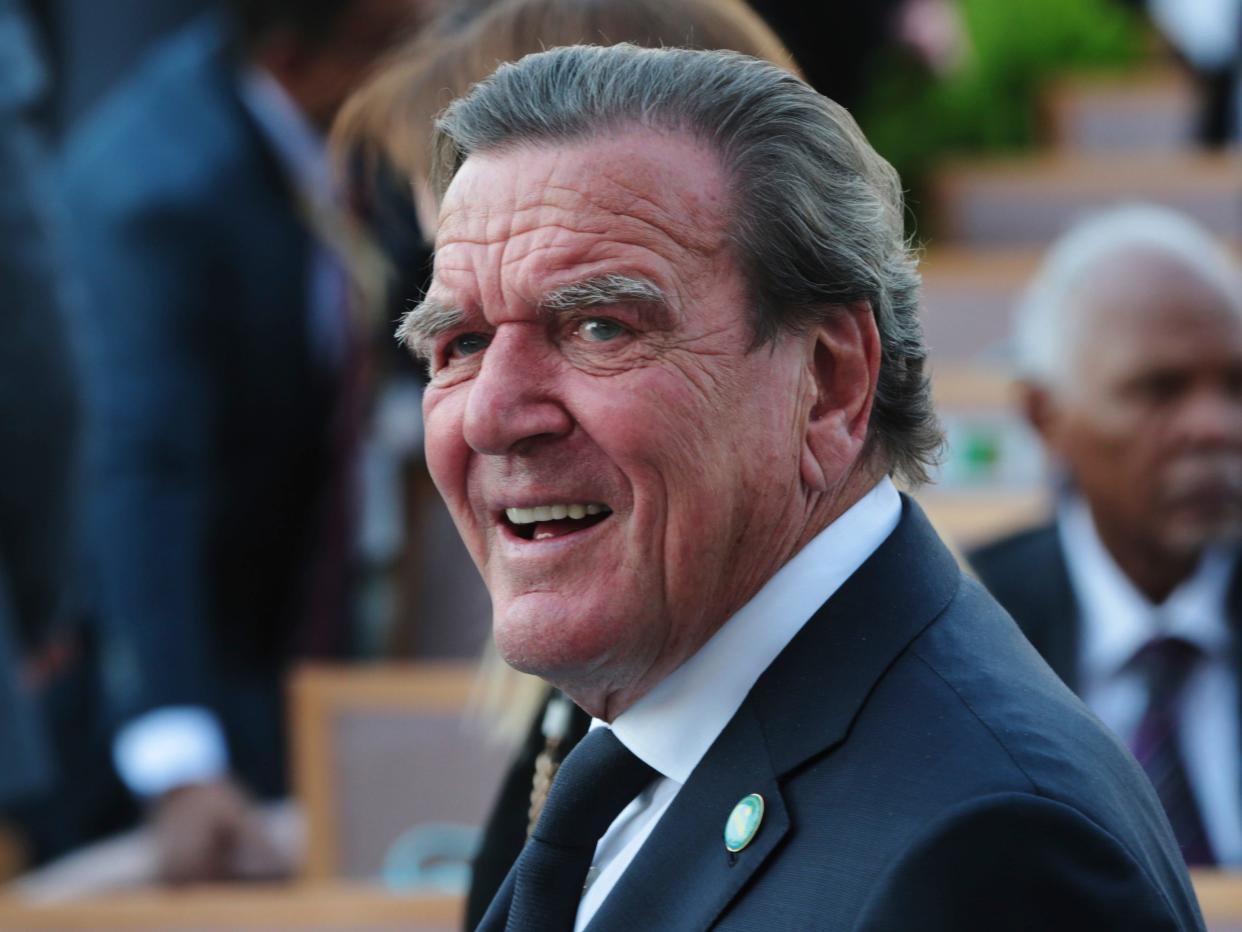 Gerhard Schröder, the former chancellor of Germany, has also been criticized over the deep ties he's forged with Russia and Putin.

Three weeks after leaving office in 2005, Schröder became head of the board of shareholders for the Nord Stream pipeline company that delivers Russian natural gas to Germany — and that he had supported while in office — despite concerns about a conflict of interest or wrongdoing.

He has since made nearly $1 million a year from energy companies controlled by the Kremlin, drawing criticism for promoting Russian energy at the expense of Germany, which relies on Russia's oil and gas, The New York Times reported. Schröder has been one of Germany's most prominent proponents of importing Russian energy to fuel the country's industrial economy — a partnership undone in the wake of Putin's brutal invasion of Ukraine.

Schröder was criticized in August after having a private meeting with Putin during a trip to Moscow.

In interviews with German media, he said he had nothing to apologize for and said the West should properly acknowledge Russia's "real fears of being hemmed in" by antagonistic countries, The Guardian reported. He also recommended Ukraine remain neutral and that both sides needed to compromise.

He's now being investigated by Germany's Social Democrats, the party he has been a part of since 1963, over his ties to Russia and Putin.