London: Elon Musk’s Starlink satellite prompted a ‘red alert’ warning after coming within 60 metres of smashing into another satellite owned by a British-backed firm.

Engineers at OneWeb and SpaceX – which owns Starlink – scrambled to avoid what could have been a disastrous collision last month after the United States Space Force sent multiple “red alert” warnings that the two companies’ satellites were about to crash.

A simulation showing the position (not appearance) of Starlink satellites in the night sky. Credit:Courtesy: Michael Vlasov/howmanystarlinkswillfillyoursky.com

Both SpaceX and OneWeb are in direct competition to establish an infrastructure of satellites that can provide high-speed and low-latency internet access to remote or rural locations around the world that were left behind by traditional cable-based providers.

OneWeb, which was founded in 2012, was bought out of bankruptcy in late 2020 for $US1 billion in a joint investment by the UK government and Bharti Global, an Indian telecoms company.

SpaceX, which was founded in 2002 by Elon Musk, the world’s second-richest man and chief executive of Tesla Motors, has already started providing broadband for customers in Britain using its Starlink network of satellites.

Starlink has a network of 1378 satellites operating in low-Earth orbit at an altitude of 550km.

By comparison, OneWeb’s 148 satellites in orbit operate at a higher altitude of around 1200km, and as a result have to pass through Starlink’s constellation on their way up.

On March 25, OneWeb launched 36 satellites into orbit from a cosmodrome in the far east of Russia as part of their plans to deliver global high-speed internet access. The satellite firm said this was the second in a five-launch programme.

Almost a week later, on March 30, OneWeb engineers saw several warning alerts from the US Space Force’s 18th Space Control Squadron, which monitors satellites for close approaches, that one of their satellites was on a possible collision course with a Starlink one.

The US Space Force suggested the probability of collision was 1.3 per cent, as the two satellites came within 60 metres of each other. 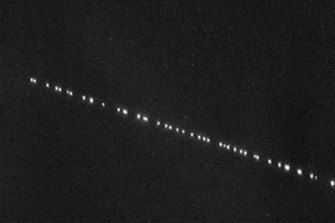 The crash alerts, which were first reported by the technology website The Verge, saved what could have been a wider emergency due to collision debris posing a risk to other satellites around.

Chris McLaughlin, OneWeb’s government affairs chief, said their team of engineers reached out to Musk’s SpaceX to co-ordinate how the two satellites could change course and avoid a collision.

SpaceX engineers agreed to switch off the satellite’s AI-powered collision avoidance system, which in turn allowed OneWeb to forge a new route for its own satellite.

This same automated system used by the Starlink network has come under fire from other satellite operators before, who claim they are not privy to its decision-making process.

McLaughlin told The Verge: “Co-ordination is the issue. It is not sufficient to say ‘I’ve got an automated system’, because the other guy may not have and won’t understand what yours is trying to do.”

In March, NASA signed a partnership with Musk’s rocket and satellite manufacturer to ensure that NASA gets right of way over other space traffic, with SpaceX responsible for its Starlink satellites taking “evasive action” to “mitigate close approaches and avoid collisions with all Nasa assets”.

SpaceX has received regulatory approval to launch more than 12,000 small satellites into low-Earth orbit, while OneWeb aims to launch a total of 648.