A rapist who attacked two women as they walked through their bayside Melbourne suburb has been jailed for 12 years for crimes a judge described as “every woman’s worst nightmare”.

Justin Mathieson followed, grabbed, overpowered and then raped both victims in separate nighttime attacks in Elwood in February and October 2012, as the women were on walking paths. 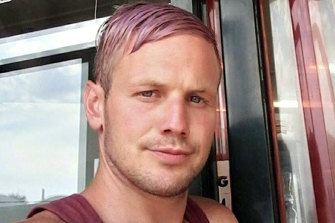 The first victim was half a block from her home when she heard footsteps running behind her, before Mathieson pushed her to the ground and assaulted her. He eventually fled when the woman’s screams alerted passers-by who ran to her aid.

The attacks went unsolved for years until investigators matched DNA samples to Mathieson last year, when he was arrested.

Late last year he pleaded guilty to four counts of rape and single charges of indecent assault and threatening to inflict serious injury.

On Thursday, County Court judge Amanda Chambers ordered the 32-year-old spend seven years and six months in prison before being eligible for parole for his crimes, which had a devastating impact on both victims. There was also a need to denounce his actions, protect the community and deter Mathieson from future offending.

“Your serious offending was a terrifying ordeal for the victims that has had a profound and enduring effect on their lives,” Judge Chambers told Mathieson, who watched the online hearing while seated at a table in prison.

“You preyed on two women, [eight] months apart, for your own sexual gratification. They were entitled to be safe when walking in a public area set aside for community enjoyment. However, they were not.

“It is no understatement to describe your offending as every woman’s worst nightmare.”

Both women this year recalled the impact of the attacks on them.

The first victim said it took her years to overcome the trauma, and that the sound of running feet still terrified her. The second estimated she lost five years of her life from her early 30s when she was housebound, socially isolated and anxious in social settings and on public transport, spent thousands of dollars addressing stress conditions and considered suicide.

Mathieson was a drug user and lived in St Kilda in 2012 and had mental health problems that included a subsequent diagnosis of schizophrenia, a personality disorder and treatment for his “sexual urgings”.

Judge Chambers found Mathieson’s mental state and disadvantaged upbringing, which included living with a violent, alcoholic father and a mother who later turned to drugs, lowered his moral culpability. She also acknowledged his guilty plea, which spared the women giving evidence.

Mathieson was in 2019 convicted for groping a woman and a girl in separate incidents but was spared jail. He has served 477 days since his arrest and will be on the register for sexual offenders for life.