Yarra Council’s mayor was forced to suspend Tuesday night’s meeting after debate over a vote of no confidence in an embattled Greens councillor was derailed when she refused to stop interjecting.

The target of the no-confidence motion, Cr Anab Mohamud, 35, had been on leave from Yarra City Council to recover from serious facial injuries after she allegedly yelled homophobic slurs during an altercation outside Chasers nightclub in South Yarra in the early hours of April 11. She was charged with assault, offensive behaviour and public drunkenness as a result of the incident.

She was removed from the council meeting, held online due to COVID-19 restrictions, after speaking over mayor Gabrielle de Vietri, her Greens colleague, during an exchange about four hours into the meeting. It is not clear whether she was asked to leave or chose to do so.

Councillors were debating a motion filed by independent councillor Herschel Landes about 11pm, seconded by socialist councillor Stephen Jolly, calling on Cr Mohamud to step aside until the charges against her were dealt with.

The Greens have continued to support Cr Mohamud since charges were laid and her party colleagues voted down the motion on Tuesday night. The party has a majority at Yarra City Council, which stretches across Fitzroy, Collingwood and Richmond. It is the party’s first local government majority in the country.

Yarra has received several complaints about the conduct of councillors at the meeting, a spokeswoman said. Cr de Vietri did not respond to requests for comment.

Greens councillor Amanda Stone accused two male councillors and two male members of the public who had addressed the meeting of launching a political and sexist attack on Cr Mohamud.

“I’m almost too angry to speak after hearing four men get stuck into the morality of a young woman. I’m sure if this was a different person in a different suburb they would not have attracted the same amount of attention,” Cr Stone said.

“I’m sorry, I was going to not get angry, but you should be ashamed of yourself doing this in a public forum.” 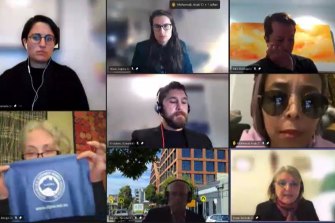 Claims of sexism were rejected by socialist councillor Bridgid O’Brien, who waved her blue Australian Local Government Women’s Association flag into the camera and supported Cr Landes’ no-confidence motion: “And I’m not a man.”

Cr Mohamud appeared to break down crying and interrupted, speaking over the mayor, who repeatedly reminded her it was not her turn to speak.

“I need to say a few words please, thank you very much,” she said over the protestations of the mayor. 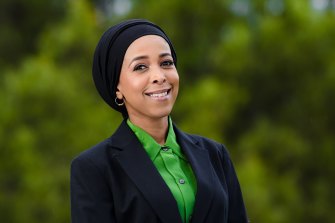 Cr de Vietri then temporarily suspended the meeting for a brief break. Cr Mohamud did not return.

Cr Landes said it was with regret that he moved the motion, which was blocked by every Greens councillor present and supported by everyone else. With two councillors absent, the vote failed three to four. Even if the motion succeeded, it would not have forced Cr Mohamud to leave council.

Cr Stone earlier said the meeting was being run as a public trial for “clearly political reasons”, and received nods of agreement from Greens councillors Edward Crossland and Sophie Wade. She said those supporting the motion were robbing Cr Mohamud of the presumption of innocence.

Cr O’Brien waved her arms to signal this was not the case. Cr Jolly – who said he hoped Cr Mohamud could clear her name and return as a key member of council – shook his head.

Earlier in the debate, Cr Mohamud said she “would love to talk about everything”.

“But I respect the law and I respect that justice take its course, and so should we all.”

The meeting had been testy throughout the night. The mayor had earlier shot down a suggestion that Cr Mohamud should not be voting on Yarra’s public drinking laws because she faces a public drunkenness charge – an offence that is being decriminalised by the state government – over the April incident.

Councillors need to declare a conflict of interest only if they feel conflicted, and Cr Mohamud stayed on for the vote to remove infringements for drinking in public, which was carried unanimously.

A councillor can be disqualified if they are convicted of an offence punishable with two years or more behind bars.

Cr Mohamud will appear at Melbourne Magistrates Court over the Chasers incident in November. A 29-year-old woman from St Kilda has also been charged with recklessly causing injury and affray over the incident.

Separately, Cr Mohamud is also charged with assault over an unrelated incident in December last year, which will go before Dandenong Magistrates Court in August.

She intends to clear her name, the Greens have previously said.