England fans hopeful of watching the Three Lions in action in the Euro 2020 quarter finals tonight are being told they must provide valid proof of quarantine or residency.

Those travelling to watch England play Ukraine in the Stadio Olimpico in Rome tonight are being quizzed by Italian authorities ahead of the match.

It comes as the Italian Embassy confirmed those who have been in Britian in the past fortnight will not be allowed into Rome’s Stadio Olympico – even if they have a ticket.

It was also revealed that tournament’s governing body, UEFA, had cancelled approximately 50 tickets sold to British addresses before it was known the game would be played in the Italian capital.

Italy is requiring all British visitors to quarantine for five days upon arrival to the country, effectively barring some supporters from watching the Three Lions take on Ukraine tonight. 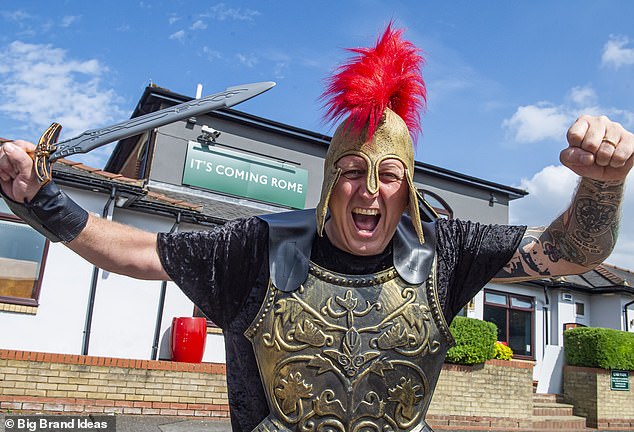 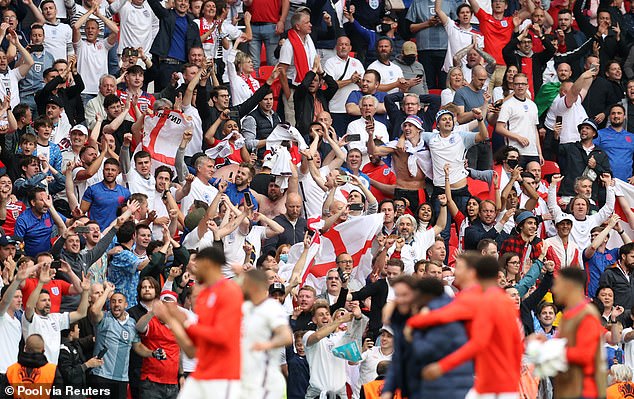 The move comes after Italy placed a five-day quarantine on arrivals from the UK, amid fears about the spread of the Delta variant.

But it meant England supporters – who only found out their side would play in Rome after winning on Tuesday – will not be able to complete self-isolation before the next match.

Ukraine fans will also not be allowed to attend, because all non-essential travel from Ukraine to Italy is banned under Italian law.

Despite the bad news for some, there are some supporters who still harbour hopes of watching the Three lions in action tonight.

Professional cycling coach Bill Halliwell told the Times that it was ‘heartbreaking’ to see most fans’ chance of watching England scuppered.

He said: ‘It’s heart-breaking for them and then, opportunistically speaking, it might mean I get a ticket for a game that I wouldn’t otherwise have a chance in hell of getting.’

Luke Curner, who lives in Helmstedt but is originally from Folkestone, Kent, bought the tickets in 2019 as the match fell on his birthday weekend – which it still does despite rescheduling.

‘I’m excited to be seeing England in a major championship but at the same time I’m sad that it won’t have the same atmosphere due to the lack of English supporters being allowed to travel,’ the 36-year-old German language student said.

The Italian government said any fans who are denied entry to the stadium after failing to comply with the requirements would be at risk of a fine.

A government spokesman told the Times that foreigners will ‘need to show negative swabs done in Italy five days earlier to prove they were in the country, and another from five days later as the emerged from quarantine.’

Supporters travelling from within the country or the European bloc will need to show their national ID card, a residency certificate or a bank statement if they are not permanent Italian residents.

Meanwhile, The FA said it will not sell any of the 2,500 tickets made available for England fans to anyone with a UK address.

They handed their allocation back to UEFA, who are working with the British embassy in Rome to ensure the tickets are sold exclusively to ex-pat supporters.

Instead, English expats living in Europe snapped up tickets to the Three Lion’s crunch Euro 2020 match with Ukraine in Rome as quarantine rules means fans in the UK are banned from travelling. 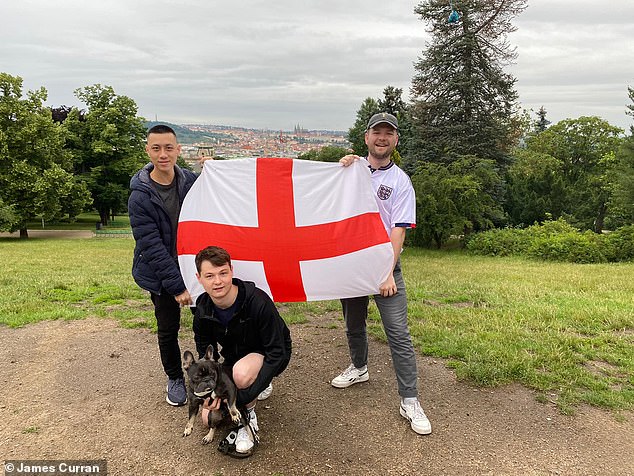 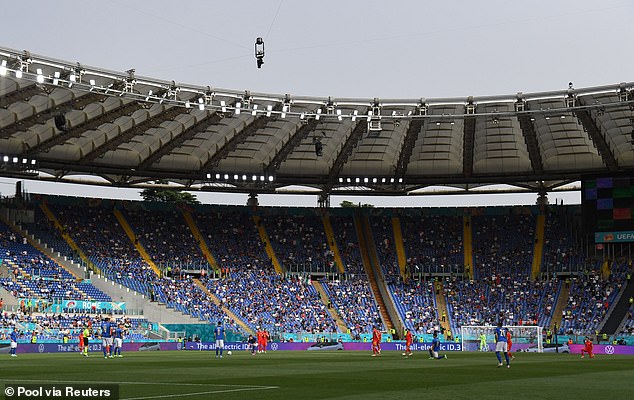 Britons living in countries including Malta, France and Germany managed to get tickets to fill up the Stadio Olimpico (pictured) on Saturday with fellow supporters in the UK forced to miss the game because they would need to self-isolate for five days 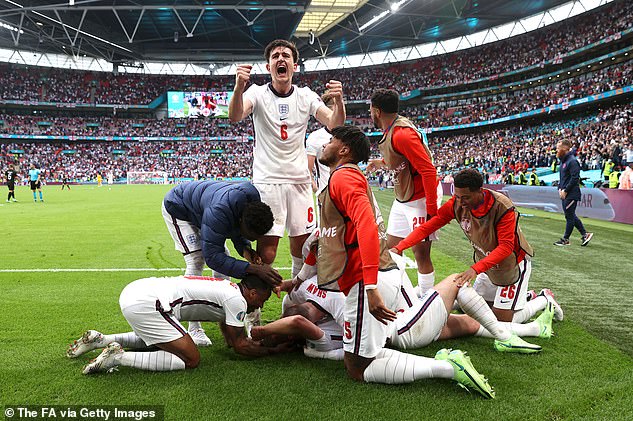 England crushed Germany 2-0 at his first international football match – as an estimated 25 million fans tuned in to watch the Three Lions storm to a glorious victory (the team, celebrating) on the pitch

Britons living in countries including Malta, France and Germany managed to get tickets to fill up the Stadio Olimpico tonight with fellow supporters in the UK forced to miss the game because they would need to self-isolate for five days.

However, most England fans who still reside in Great Britain have been left disappointed by Italy’s Covid rules.

Warrick Howard, from Leicestershire, purchased tickets through the ballot system in 2019 for 140 euros each, but his plans for the match have been curtailed by Italy’s five-day quarantine requirement for UK arrivals.

‘Given the huge push to have everyone vaccinated there were ways of making this work for fans attending this tournament, but Uefa and the EU have made no effort to do so,’ the 37-year-old said.

The Football Association (FA) had originally been given 2,560 tickets for the match, which will mean those cheering for England in attendance will make just 16 per cent of the agreed 16,000 capacity at the Stadio Olimpico in the Italian capital.

But on Wednesday, the FA handed back those tickets to UEFA who agreed to sell them exclusively to British fans who do not live in the UK.

Downing Street also urged fans not to travel to Rome for England’s Euro 2020 quarter-final tie with Ukraine on Saturday as Italy is on the amber list, which means anyone who has travelled to the country has to self-isolate for 10 days on their return to Britain.

England, EU, Fans, going, to, Watch
You may also like: