Hawthorn premiership player Brian Lake has been convicted and fined $900 for using his finger to poke a security guard in the nose at Melbourne’s Crown casino.

The former star defender used his right index finger to poke the guard after Lake’s friend was refused entry to the casino on September 26, 2019 because he was drunk, according to documents released by Melbourne Magistrates Court. 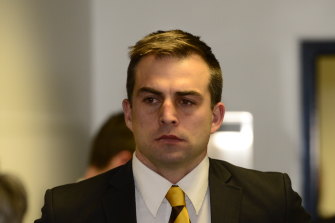 Brian Lake has been convicted and fined $900 for unlawful assault.Credit:Justin McManus

Lake was in July 2019 put on a community correction order after pleading guilty to stalking and other charges, and the assault on the guard was a breach of that order.

However, magistrate Timothy Bourke found the assault was a low-level incident and there was nothing to justify sending the 38-year-old to prison.

Lake was not required to attend court for the sentence.

Lake, who played 251 games for the Western Bulldogs and Hawthorn and was a member of the Hawks’ 2013-15 premiership wins, pleaded guilty to unlawful assault. He retired from the AFL after the 2015 season.

His lawyers wrote that he was “embarrassed and horrified of the position that he has placed himself in” and that he poked the guard in the nose “for no reason other than immaturity and frustration”.

The former AFL player had since curbed his drinking, his lawyers said.

Mr Bourke said Lake offered no excuse for his actions, accepted responsibility, pleaded guilty early and was remorseful. There was no evidence the guard was injured and he didn’t file a victim impact statement.

Lake was in 2019 ordered to serve an 18-month community correction order, comprising community work and mental health treatment, after he pleaded guilty to stalking, trespass and property damage after he entered a woman’s home and damaged an iPhone.

In 2018 Lake spent six days in custody in Japan over an altercation with a local man, until he was released without charge.

Brian, convict, Ex-AFL, Lake, star
You may also like: