EXCLUSIVE: Rookie San Antonio cop, 25, fired for shooting and injuring boy, 17, eating cheeseburger is married ex-soldier who was once commended for his FIREARMS skills

The fired San Antonio cop who shot an unarmed 17-year-old who was sitting in his car eating a cheeseburger is a married former soldier who was commended for his firearm skills while in the police academy.

James Brennand, 25, was on the job just seven months when he confronted Erik Cantu around 10:30 p.m. in a McDonald’s parking lot.

He has now been pictured for the first time by DailyMail.com

An unharmed female passenger was seated next to the victim. She has not been identified. At the time of writing, Cantu is listed as being in critical but stable condition.

According to his LinkedIn page, Brennand previously served in the US Army as a military dog handler. He enlisted in 2016. Brennand was stationed outside of Seattle.

On that profile, Brennand refers to himself as an ‘experienced working dog handler with a demonstrated history of working in the military industry.’ He also says that he is ‘Skilled in Law Enforcement, Operational Planning, Active DoD Secret Clearance, Military Operations, and Security.’

One of the pages he liked was the San Antonio Police Department – the very force he has now been fired from.

While in the Army, Brennand received a degree in criminal justice and police science from Kaplan University, an online college.

He graduated from the San Antonio Police Training Academy in 2021. Brennand was commended for his skills with a gun, finishing fourth in his class in the firearms discipline.

The former police officer has one child with his wife, Danielle Arnold, Arnold is also a dog handler with the US Army. It’s not clear if Arnold is still active in the military. She says on her Facebook page that she is attending online courses on Purdue University. 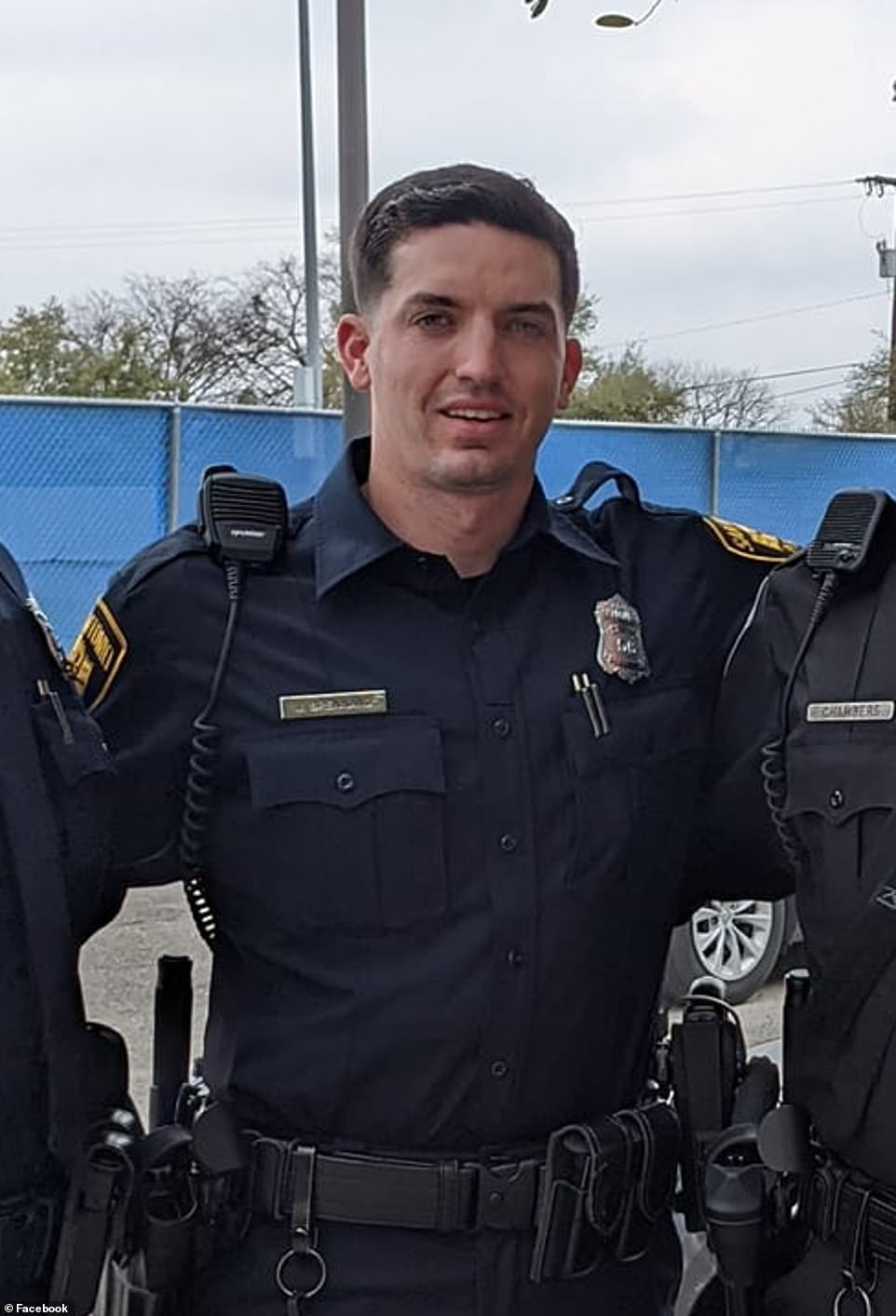 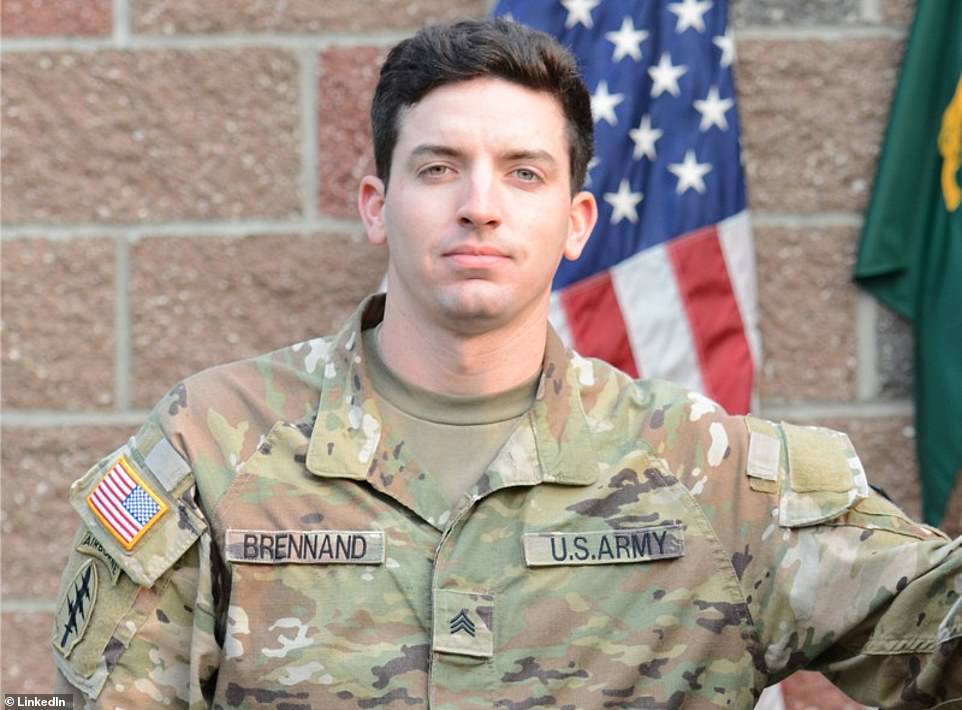 According to his LinkedIn page, Brennand previously served in the US Army as a military dog handler. He enlisted in 2016. Brennand was stationed outside of Seattle 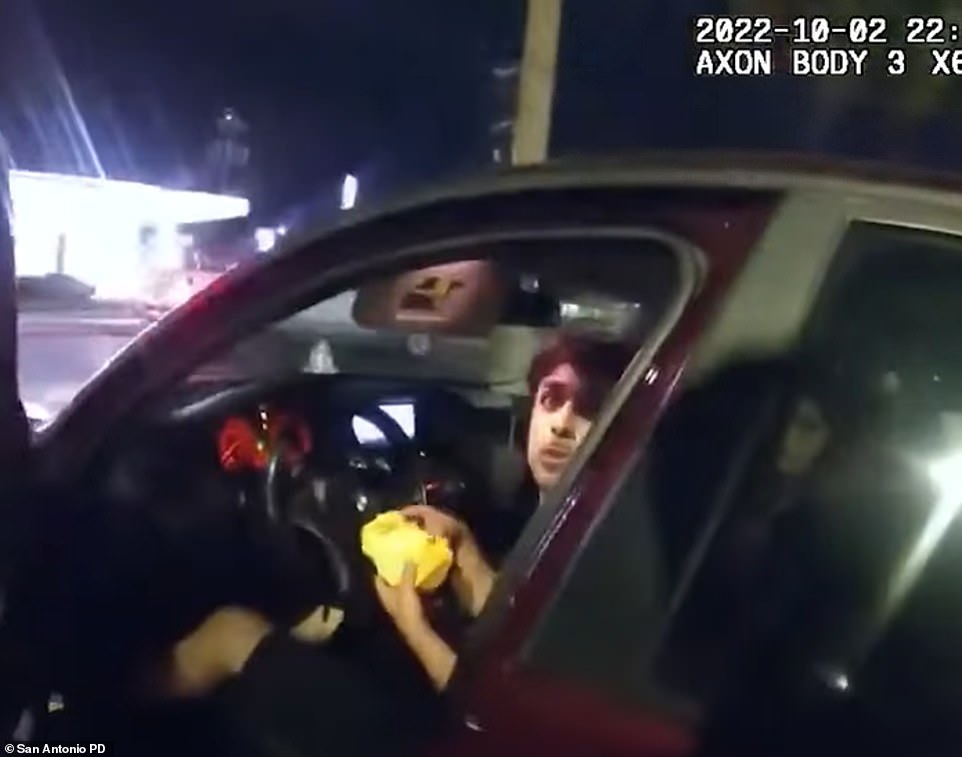 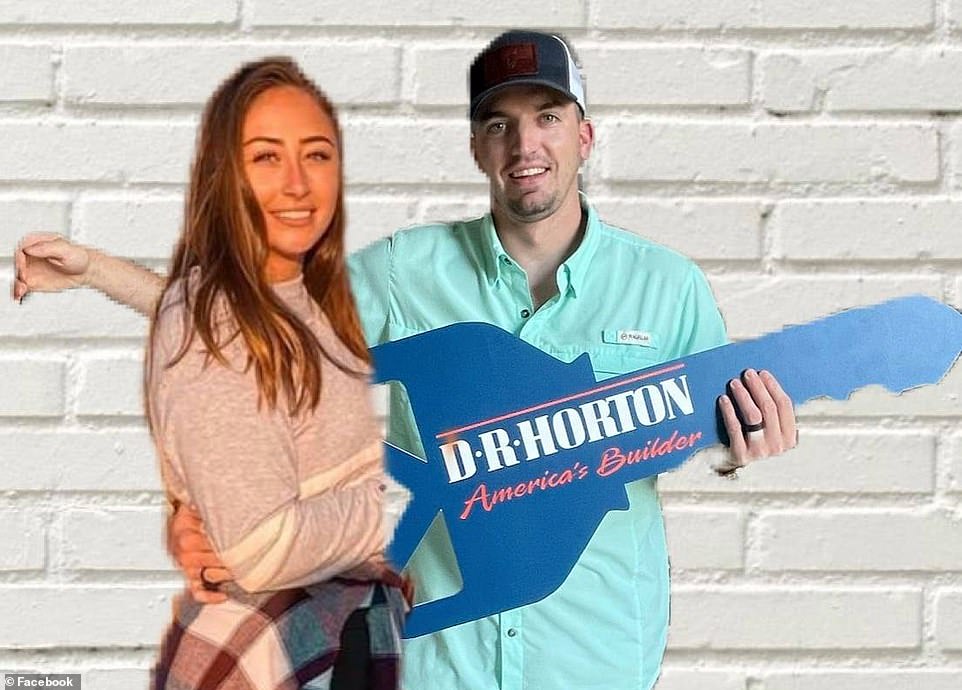 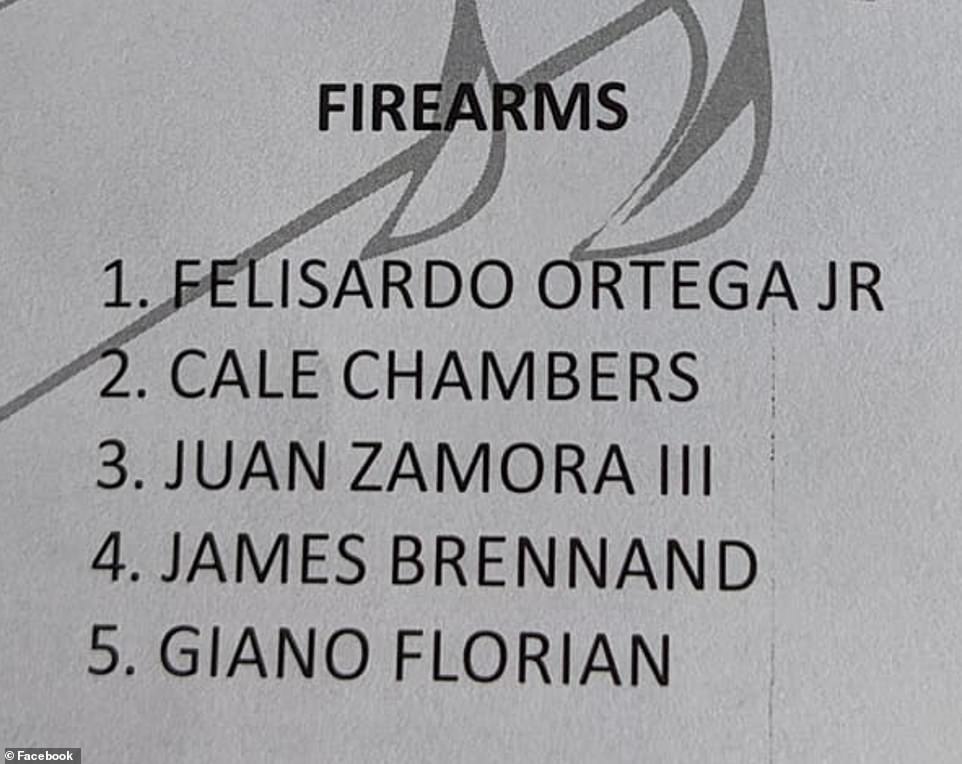 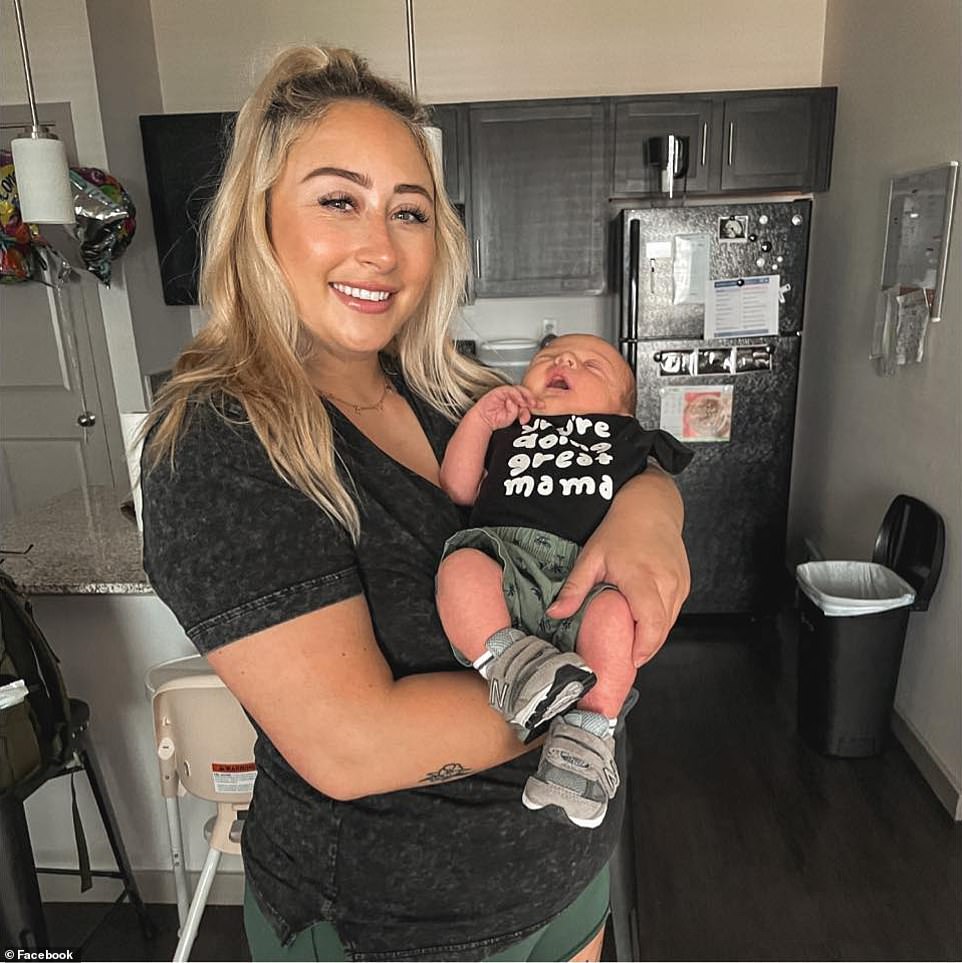 The former police officer has one child with his wife, Danielle Arnold, Arnold is also a dog handler with the US Army

On Wednesday, the San Antonio Police Department acted swiftly in firing Brennand. At the time of his termination, he was still in his probationary period — which means he’s not entitled to an appeal — and had been on the job for just seven months.

Law enforcement initially laid charges against the teenager for evading arrest and assault on a police officer, but those have since been dropped. Under Texas law, due to the fact that the teen had charges pending against him, his family was only permitted to be by his bedside for limited periods of time.

Prior to the release of the video, Brennand maintained he only opened fire on Cantu after the teenager hit him with his car. The new video shows otherwise.

Brennand was called to the McDonald’s after a reported disturbance unrelated to Cantu. When the officer arrived  at the scene, he apparently mistook the teens’ car for a vehicle that evaded him the previous night.

That car had sped away from Brennand when he attempted to pull it over as its license plates did not match the car.

Brennand approached Cantu’s maroon car and called for cover, but quickly tried to take matters into his own hands and opened the car door.

Police have not confirmed whether Cantu’s car was stolen.

The video shows the moment Brennand surprised Cantu and demanded the teen get out of the car.

As Cantu questioned the officer’s orders, he attempted to put the car in reverse and the door catches Brennand.

Brennand quickly opened fire and shot into the driver’s side of the vehicle as Cantu reversed, and the bodycam footage caught the cop shouting ‘shots fired!’ into his radio.

Cantu pulled out of the parking spot and tried to drive away, but Brennand continued shooting into the back of the vehicle.

The teens were then found outside the vehicle a block away from the shooting. 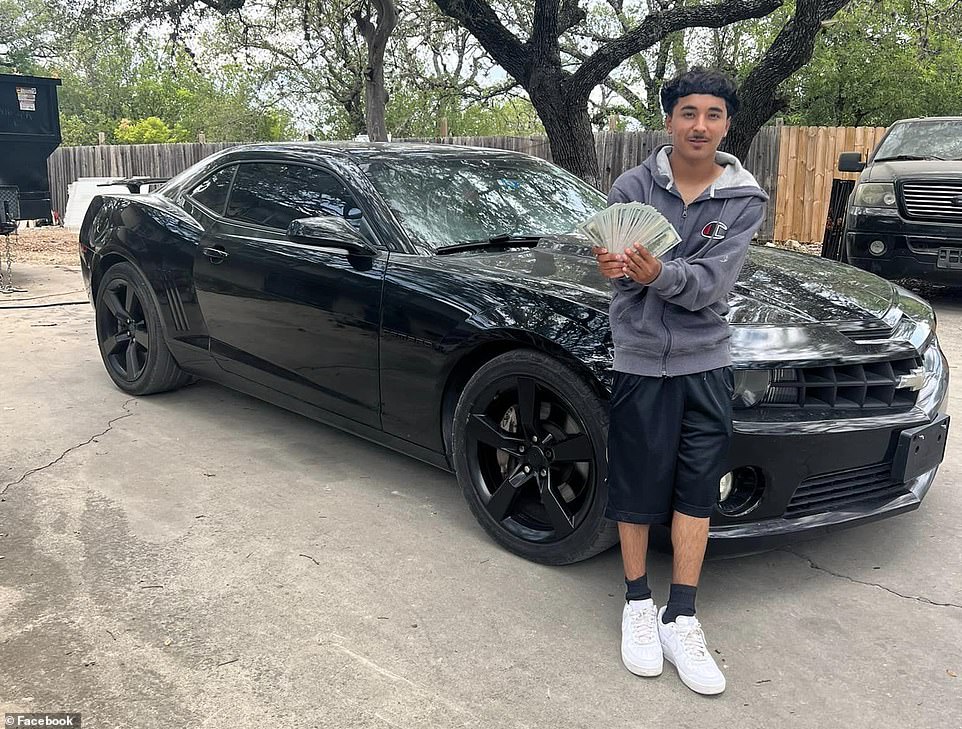 Under this Facebook post from June 2022, Cantu’s grandmother wrote: ‘My boy, I’m very excited for you, I just ask you one thing, drive safely and take care of yourself, love you lots, God is good’

Speaking at a press briefing on Friday, Bexar County District Attorney Joe Gonzales confirmed that upon reviewing the video, his office instructed the police department to drop the charges against Cantu.

Gonzales also updated the public on Cantu’s condition saying: ‘This young man is in critical but stable condition in the hospital. There was some issue with his parents being able to have extended contact with him. I understand it’s a touch-and-go situation.’

He added: ‘Exercising my discretion, what I decided to do for now is dismiss this case so that his family can be by his side.’

With regards to possible charges against Officer Brennand, Gonzales said: ‘That case is pending. We will have to wait until SAPD files the entire case in our office. We will then review it.’

He went on: ‘My concern right now is with the health of this young man, with his parents’ ability to be by his side, and so that’s why we have done what we have done. It’ll take some time for SAPD to file the complete case with us and then we’ll make the decision.’

‘I commend the San Antonio Police Department for taking the action that they did for terminating this individual because, clearly, there was concern on their part. It is commendable that members of that department saw fit to terminate this individual,’ the district attorney added.

There is a possibility that Brennand could face criminal charges.

Earlier this week, San Antonio Police Chief William McManus said of Brennand: ‘There’s nothing that I can say that could defend what he did, his actions that night.’ 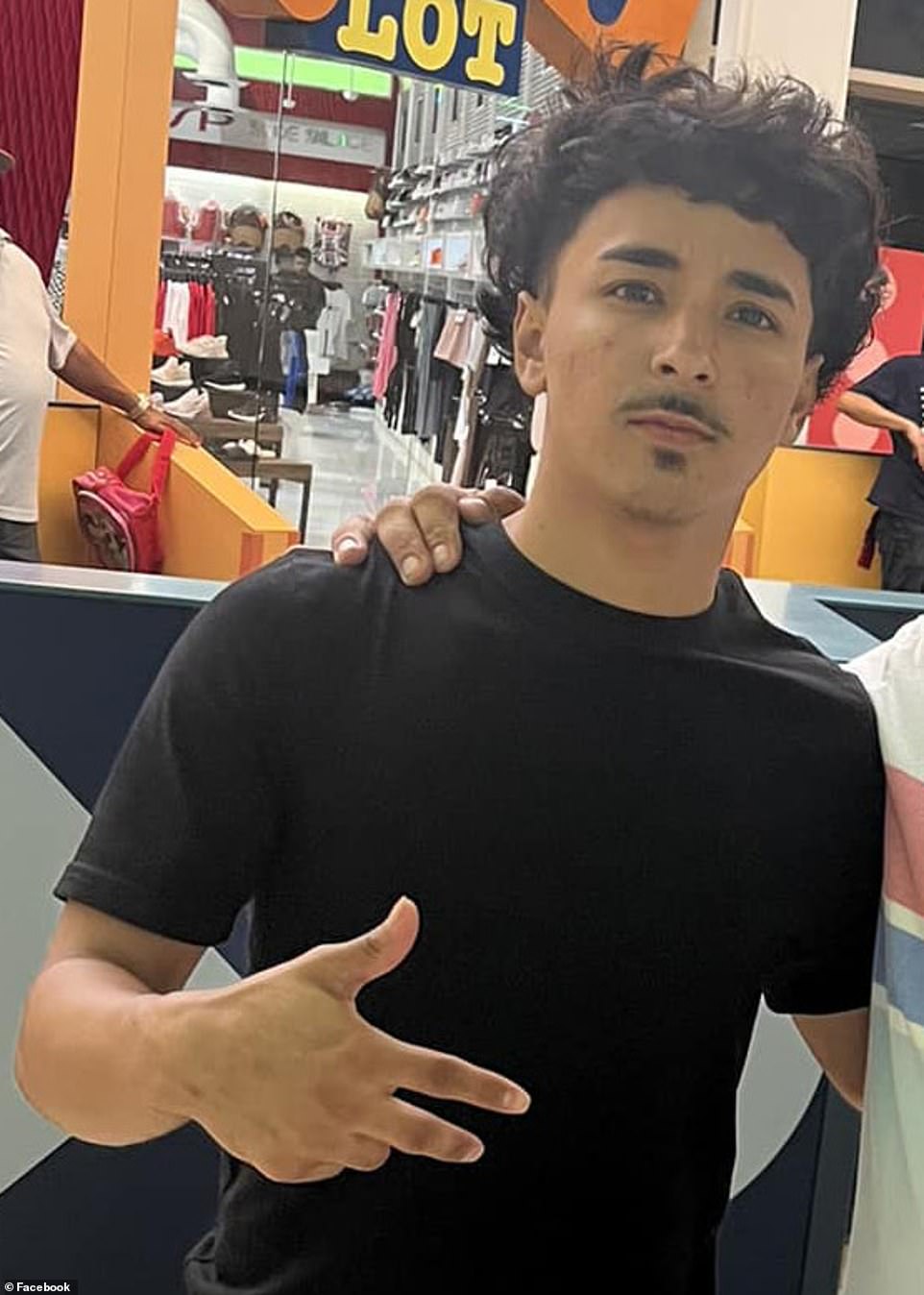 Eric Cantu pictured on his Facebook page in September 2022

According to Cantu’s Facebook page, he works at The Wash Tub, a San Antonio-based car service business.

His former supervisor, Christopher Montalvo, told KSAT that Cantu worked at the business for three months earlier this year.

Montalvo said he last saw Cantu two weeks ago when he came in for a car wash. He said: ‘Good laughs, just normal human being stuff. Nothing really serious. I never got a bad vibe from (Cantu). He was always a really good guy to me, and he always respected me. Every time I told him to do something, he always did it, and he worked hard.’

The supervisor was not aware that Cantu had been shot. When he was shown the video by a KSAT reporter, Montalvo said: ‘That’s hard to watch. That’s scary. I’m speechless, honestly. (Cantu) looks scared. He looks terrified. He doesn’t know what’s going on. He was just in his car eating. That right there, that personally didn’t look right to me.’

Posts on Cantu’s Facebook page show a keen interest in cars, there are multiple pictures showing him in front of a Dodge Charger, which comments indicate he had just purchased in May.

Under that picture, his grandmother wrote: ‘My boy, I’m very excited for you, I just ask you one thing, drive safely and take care of yourself, love you lots, God is good.’

He replied: ‘I appreciate it Liz. You have always been like a mother to me. You always treated me like if I was your son. Can’t wait to show it to you!’

On the Intro section of his page, Cantu wrote: ‘Trust in the LORD with all thine heart; and lean not unto thine own understanding. KJV Proverbs 3:5.’ 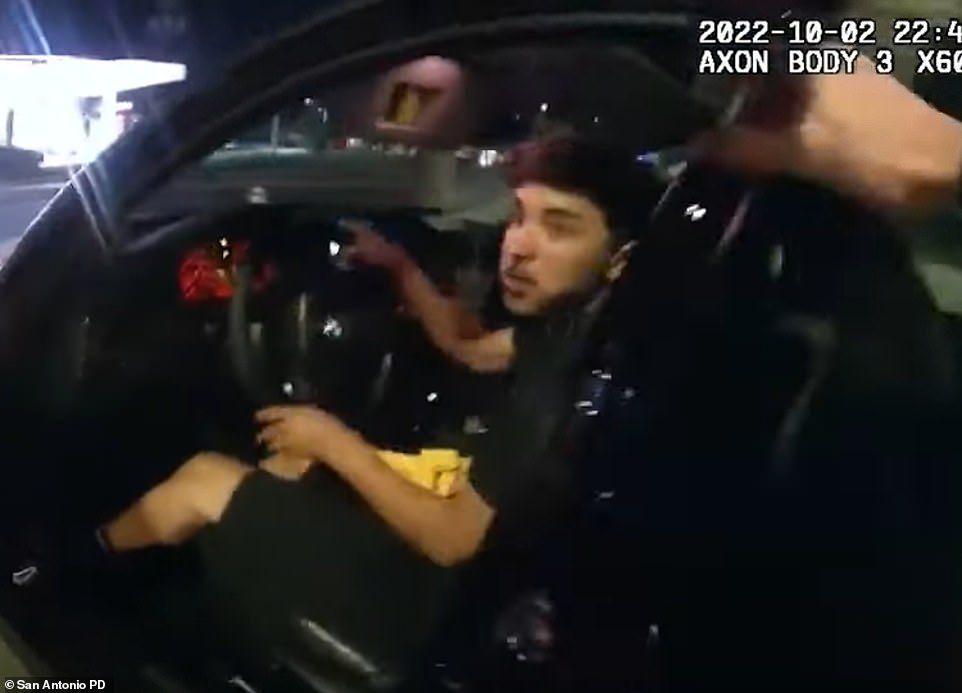 When Cantu reversed, the door of the vehicle reportedly hit Brennand, and the cop then draws his gun and immediately starts firing on the teen couple 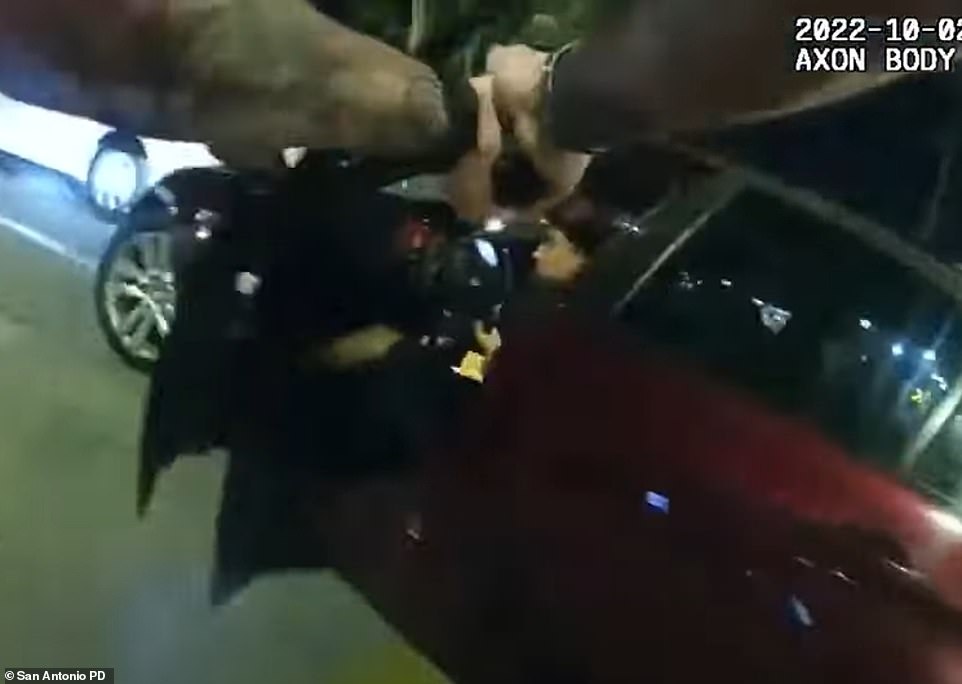 Brennand shoots the drivers side window repeatedly and shouts ‘shots fired’ into his radio, and Cantu attempts to drive away 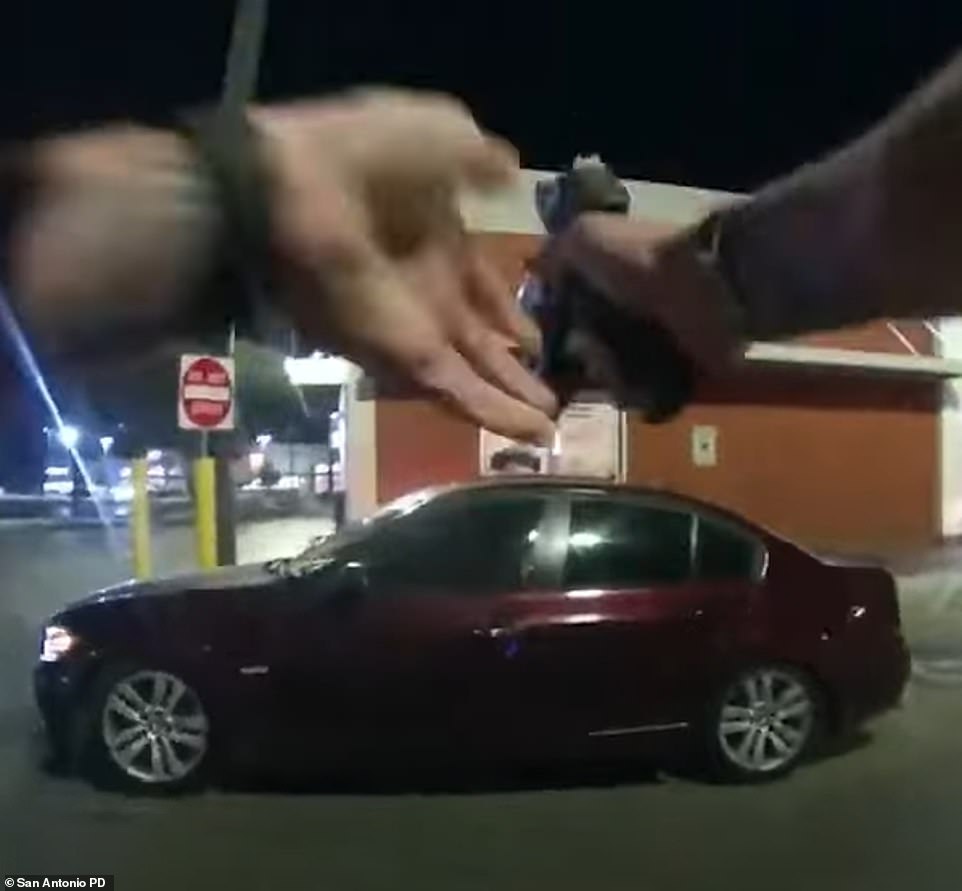 Even as Cantu drove away, Brennand keeps shooting into the vehicle

The police report stated Brennand performed CPR on Cantu when he caught up, and the female passenger in the car was uninjured.

Bexar County District Attorney Joe Gonzales said the investigation could take up to a year, and ‘the DA’s Office will also review all evidence related to the charges against Erik Cantu once we have received it.’