Cape Town, South Africa: With Africa accounting for only around 2 per cent of global coronavirus vaccinations, health officials on the continent are looking warily at waves of infections sweeping India and elsewhere that have stoked fears of a long tail end of the pandemic.

Current timelines for mass vaccination campaigns in most African countries run well into next year – if not further.

Confirmed cases have been rising steadily in many African countries, though quick but economically destructive restrictions on movement have clamped down surges before they’ve gotten out of control in most places. 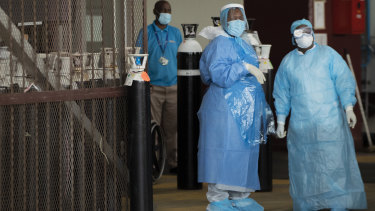 The slow rollout has made Africa’s hunt for new variants, which tend to emerge where spread goes unchecked, more urgent.

The continent’s top health official as well as leaders at its main virus genome sequencing laboratories in Nigeria and South Africa said they were trying to avoid a crisis like the one in India. Despite efforts to contain them, the emergence of yet more new variants in Africa is likely this year, they said, thanks to vaccine hoarding by wealthier nations, delivery delays and low vaccination capacity.

“My big concern is that if vaccine nationalism continues, and if people (in Africa) are not vaccinated early enough, the virus will keep mutating and as the virus keeps mutating, we may end up having a virus that is completely resistant to all of the vaccines out there,” said Christian Happi, director of the African Centre of Excellence for Genomics of Infectious Diseases (ACEGID) in southern Nigeria. “Eventually, the world could be back to square one.”

As of this week, less than half a million people in Africa had been fully vaccinated, while less than 10 million had received a first dose, according to the World Health Organization. Most of the continent has avoided the huge death tolls seen in Western countries because of a combination of factors ranging from swift imposition of lockdowns to its relative lack of inclusion in global networks of travel and trade, and other factors including biological ones that are still being studied.

Happi’s lab, along with the KwaZulu-Natal Research Innovation and Sequencing Platform (KRISP) in South Africa, are Africa’s two main hubs of genomic sequencing. While they have been credited with discovering significant variants of concern in their respective countries, they are under-resourced and have only been able to sequence less than a tenth of the samples that labs in Britain and the United States have, despite being home to around three times as many people. 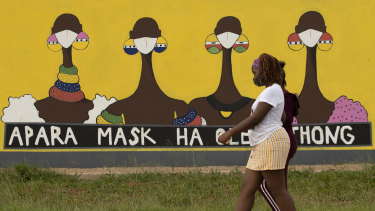 A woman walks past a coronavirus-themed mural promoting the use of face mask in public to protects against COVID-19 in Vereeniging, South Africa.Credit:AP

Most African countries don’t have labs that can do genome sequencing, so ACEGID and KRISP field weekly batches of a few hundred samples from around their respective regions, some of which are spoiled by the time they arrive because of the difficulty of keeping them stable across multiple flights and various other handlers.

“What we’ve tried to do – although we’re doing lower volumes – is still sequence systematically so we’re able to understand what’s happening in different parts of the continent,” said Richard Lessells, an infectious diseases specialist and group leader at KRISP. “That’s what basically allowed us to detect the 501Y.V2 variant before Christmas.”

Without any major sequencing effort in other countries, it remains unknown whether the emergence of these two variants coincidentally happened in the countries with capable labs, or if there might be other variants circulating widely in countries that produce very few samples for testing.

Senegal, Uganda and Kenya, among others, have also done smaller batches of sequencing at national research institutes. On Wednesday, Uganda announced it would start taking samples from arriving passengers at its main international airport, a monitoring measure also taken by Angola since the beginning of the year.

Among the samples Angola sent to KRISP was a variant found in three travellers from Tanzania that researchers described as the “most mutated” variant of the coronavirus found to date.

Tanzania’s government announced new containment measures this week, more than a month after the death of the country’s previous president, John Magufuli, who was an ardent denier of the pandemic’s severity as well as its presence in Tanzania.

“The Angolans had a robust system for retesting people on arrival and isolating anyone if tested positive,” Lessells said. “Of course, you don’t know at the time that people at the airport have tested positive that that’s a new variant straight away. But the policy of testing and isolating at the border has the potential to limit the introduction of new variants.”

Since the pandemic began, African labs have sequenced fewer than 15,000 samples compared to hundreds of thousands in some Western countries.

“Our goal is to make sure we generate 50,000 sequences by the end of the year so we can have a better picture of what’s going on in the continent,” said John Nkengasong, the director of the Africa Centres for Disease Control and Prevention, the continent’s main health body. “I’m hoping we can expand the capacity to more countries to do it locally.”

The variants thought to be currently most prevalent in Africa exhibit mutations on the E484K protein, which studies have suggested makes them able to partially escape antibodies created by existing vaccines.

That has led researchers like Happi and Lessells to feel less concerned about recent findings of a variant spreading widely in India, known as B.1.617, having been found in South Africa, Uganda, Kenya and other African countries. Given what was known about B.1.617, said Lessells, it was unlikely it could take over dominance from the variants already present in much of Africa.

Above all, however, was a need for more sequencing resources, and a greater sense of urgency and vigilance.

Last month, a spike in coronavirus cases in South Africa’s Northern Cape province set off alarm bells among local health officials after over 100 cases were reported overnight in a small cluster of towns.

“Through sequencing we could quickly show that it was still the 501Y.V2,” Lessells said. “But steady, regular surveillance depends on what resources you have. We can only do a small number because we don’t have limitless capacity and money.”