A child sex offender who stabbed and seriously injured two police officers in a ‘savage’ and drunken attack after they found him drinking at wheel of car has been jailed for 20 years.

Jon Ross, 62, stabbed and slashed at PCs Darren Brimacombe and Timothy Willett after they responded to a disturbance at a home in Dartmoor.

Ross burst from his parked car launched a ‘frenzied’ attacked the officers with a knife after they found him in Princetown, Devon, in the early hours of July 9, 2021.

PC Brimacombe suffered a serious arm injury and cuts to his head and face while PC Willett sustained serious injuries to his arm and fingers.

Both officers needed hospital treatment and have undergone surgery as part of their recoveries. Neither officer has come back to frontline duties as a result of the incident, and both are looking for other roles within the force. 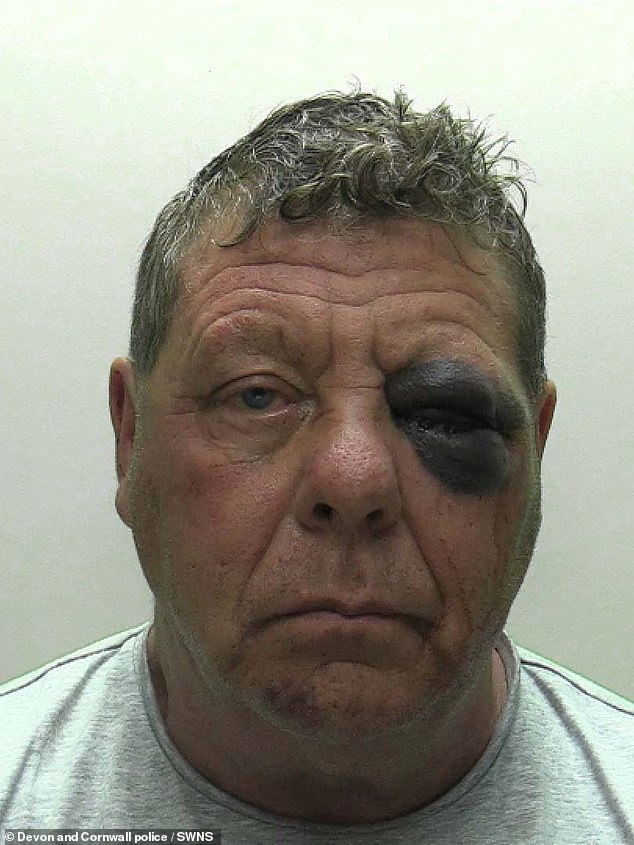 This is the shocking face of child sex offender Jon Ross, 62, after he stabbed and seriously injured two police officers in a ‘savage’ and drunken attack

Ross of Burrator Avenue, admitted to two counts of assault occasioning grievous bodily harm, with intent. He had also pleaded guilty to charges of affray and assault on a previous occasion.

He was sentenced to 12 years for these offences.

He had previously been found guilty of four historic sexual offences against a child in a trial that concluded in April, for which he was sentenced to eight years in prison.

The total 20 year sentence will be served consecutively and was handed down by Judge Simon Carr at Truro Crown Court yesterday.

Ross must serve two-thirds of that before he will become eligible to be released on licence and will be on the Sex Offender’s Register for life.

Judge Carr praised the victim of the sexual offences and said: ‘Your victim gathered the courage to approach the police to report what had happened to her.’

Referring to the serious assault on the officers, he said: ‘Frenzied is a term overused by the court but not in this case.

‘Armed with a knife, you stabbed out repeatedly causing permanent injury to both. The psychological damage has been immense. You went on to attack two other officers.’ 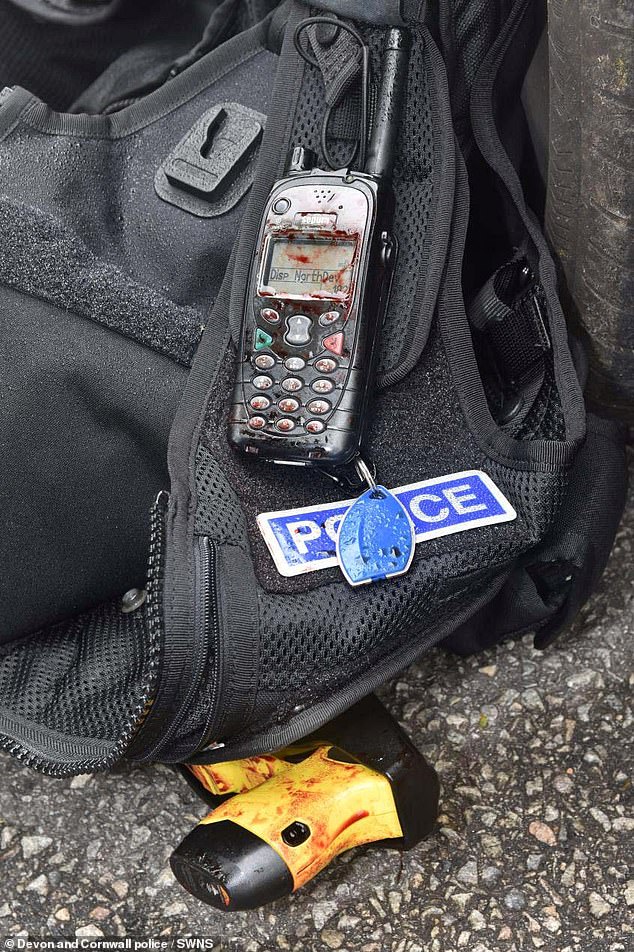 Devon and Cornwall Police released shocking images of the scene, with the blessing of PCs Brimacombe and Willett, to highlight the dangers faced by officers

The court heard how police were called to reports of a disturbance at a property late on July 8, 2021.

Officers were told Ross had been drinking alcohol, had taken his car keys and left the address and that the caller was unsure of his state of mind.

PCs Brimacombe and Willett, who knew Ross from previous community work, searched the area and located his vehicle.

They found him in the driver’s seat and drinking from a bottle.

Both officers calmly spoke to Ross despite him being verbally abusive and aggressive towards them.

Without warning, Ross swung at and narrowly missed PC Willett with a knife.

He then exploded out of the open car door and attacked PC Brimacombe, repeatedly stabbing him as they grappled on the ground.

The officer suffered lacerations to his scalp and face — nearly having the end of his nose cut off. 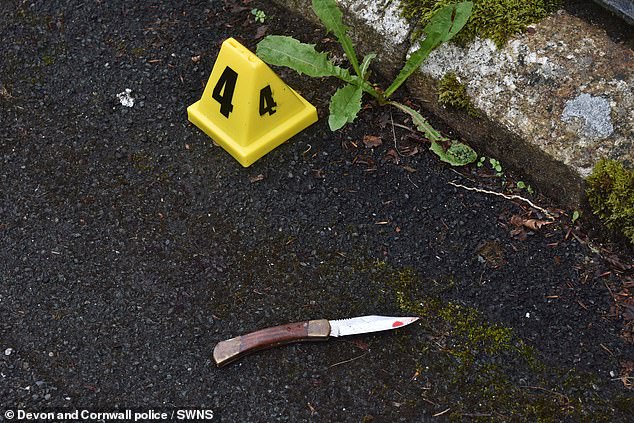 Ross exploded out of the open car door and attacked PC Brimacombe, repeatedly stabbing him as they grappled on the ground. Pictured, the knife at the scene 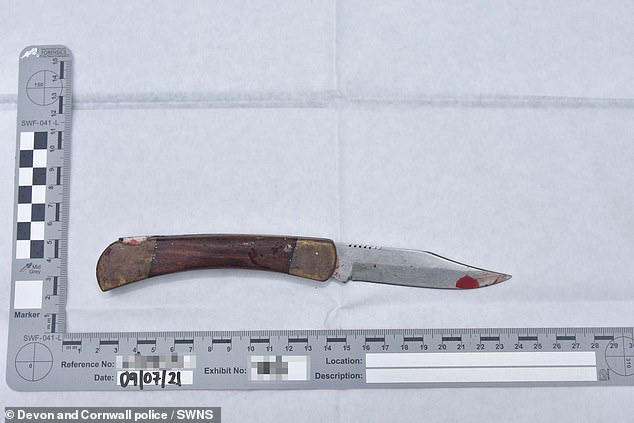 Ross stabbed PC Brimacombe in the arm, causing a significant arterial bleed, which had to have a police-issue tourniquet applied. Pictured, the weapon

PC Willett then struggled with Ross and pulled him off his injured colleague.

He was stabbed in his forearm and sustained finger injuries as he wrestled the blade from Ross’s grasp.

Both officers then activated emergency buttons on their radios to request immediate help.

PC Brimacombe’s arm was bleeding so heavily, a police-issue tourniquet had to be applied to the wound.

Ross was later found to be twice over the legal limit of alcohol to drive a vehicle.

Devon and Cornwall Police released shocking images of the scene, with the blessing of PCs Brimacombe and Willett, to highlight the dangers faced by officers.

Detective Constable Craig Ferguson said after the sentencing hearing: ‘We are pleased with the outcome in what has been a lengthy and detailed police investigation.

‘Jon Ross employed an extreme and savage level of violence, with a bladed weapon, to severely injure the two police officers.

‘The officers were on duty and in uniform when they attended to try and help him. They knew him personally from previous dealings where they had successfully helped him.

‘The officers sought to speak with him and tried to help, but he responded by repeatedly stabbing them in a sustained attack.

‘As a result, Jon Ross has been imprisoned for a lengthy period of time, meaning that a significant risk has now been removed from our local community.

‘I have worked as a police officer for the past 18 years and can say that this assault is without doubt the worst incident of its kind that I have dealt with.

‘The officers conducted themselves with the utmost professionalism, both before and after this terrible ordeal, and we have concluded that their approach and conduct throughout was of a very high standard. 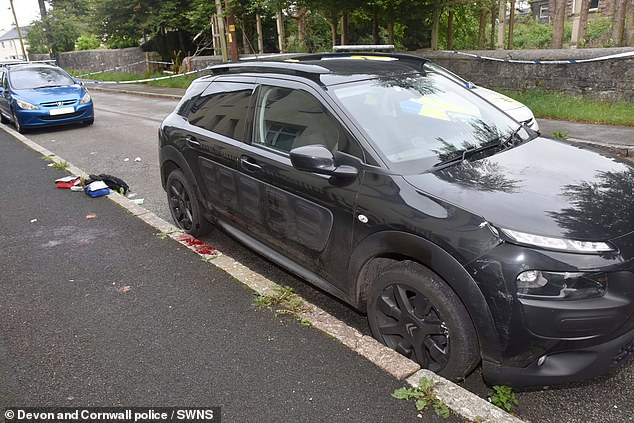 PCs Brimacombe and Willett found Ross in the driver’s seat and drinking from a bottle. Pictured, the scene in Princetown 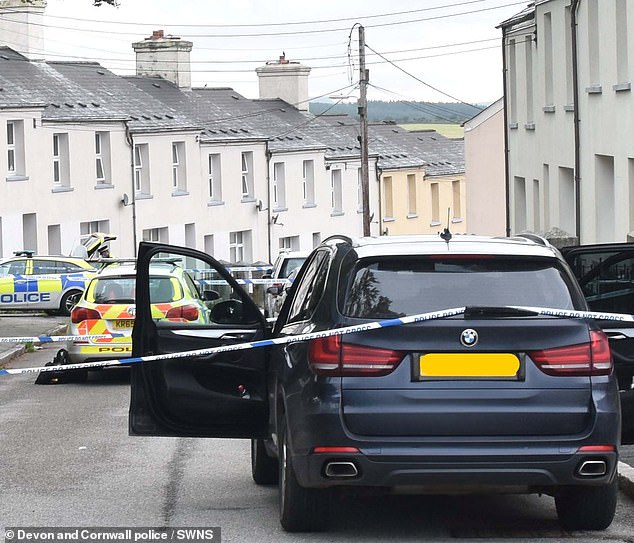 PC Willett was stabbed in his forearm and sustained finger injuries as he wrestled the blade from Ross’s grasp. Pictured, police tape at the crime scene last year

‘There was nothing that they could do to plan for or avoid the extreme level of violence that Jon Ross had in mind.’

Assistant Chief Constable Steve Parker added: ‘I would like to praise the courage shown by the sexual assault victim.

‘This is an important reminder that such reports will always be taken seriously by the police and justice will be sought and we would always encourage victims to come forward.’

He added: ‘The assault on the officers reflects the dangers and challenges police face on a daily basis, despite this force area being one of the safest places to live in the country.

‘They understand risk comes with the nature of policing but being assaulted on duty should never be condoned or seen as ‘part of the job’.

‘Devon and Cornwall Police will always seek to pursue and prosecute those who behave in this way.

‘This incident could all too easily have resulted in a more tragic conclusion.

‘I would like to take the opportunity to praise the bravery of PCs Brimacombe and Willett and acknowledge the actions taken by their colleagues and other emergency service workers who came to their aid, whose actions and professionalism under difficult circumstances played a huge part in preventing an even worse outcome.’