How did they miss this monster? Families of London Bridge knife victims condemn security ‘shambles’ for leaving crazed jihadi free to kill

Relatives of two Cambridge graduates who were killed by a convicted terrorist lambasted the security services last night for ‘shambolic’ blunders which contributed to the atrocity.

At the climax of a dramatic inquest into the attack at Fishmongers’ Hall in central London, a jury ruled that MI5, the police and the probation service were all at fault.

Jurors concluded that ‘missed opportunities’ by the agencies contributed to the killing of Jack Merritt, 25, and Saskia Jones, 23, by jihadi Usman Khan. 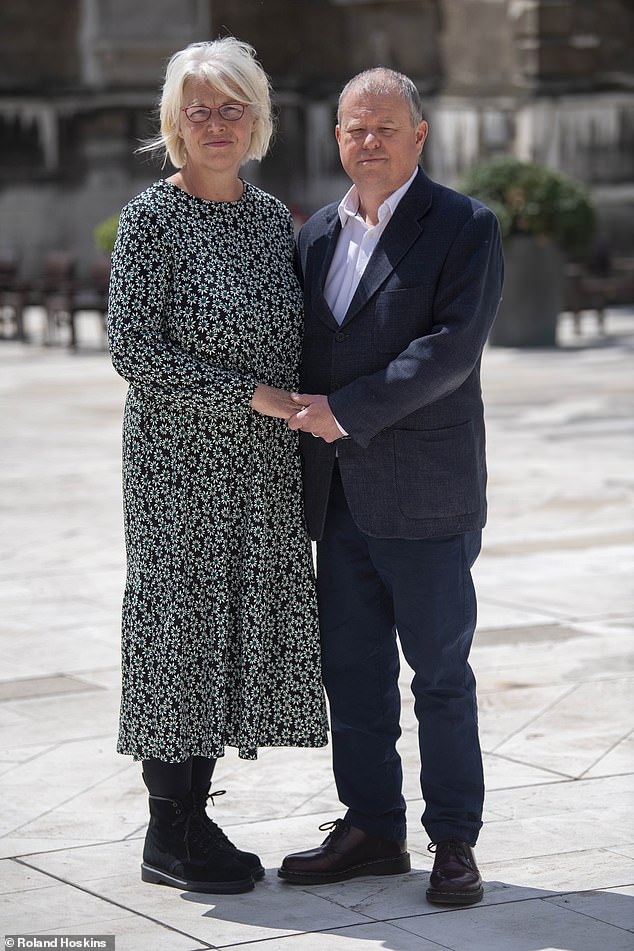 Jack’s parents David and Anne (pictured), both 56, said the way Khan was monitored was a ‘shambles’ and ‘totally dysfunctional’

They highlighted the ‘serious deficiencies’ and ‘unacceptable management’ of the team responsible for monitoring Khan, 28, after his release from prison for a previous terror offence.

The jury said there was a ‘blind spot to Khan’s unique risk’ because of his ‘poster boy image’ for prison rehabilitation.

These failings meant police and probation officers believed he was a reformed character – even though there were at least 40 warning signs that he craved martyrdom.

Last night Jack’s parents David and Anne, both 56, said the way Khan was monitored was a ‘shambles’ and ‘totally dysfunctional’. The couple still cannot fathom why one of the UK’s most dangerous terrorism inmates was allowed to travel 150 miles without a police escort to a prisoner rehabilitation conference in London within a year of his release. 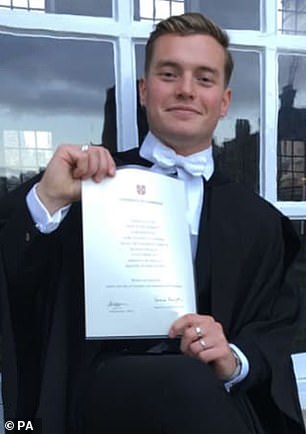 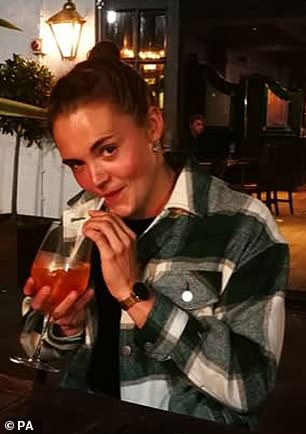 Jurors concluded that ‘missed opportunities’ by the agencies contributed to the killing of Jack Merritt, 25, and Saskia Jones, 23, by jihadi Usman Khan

Nightmare goes on for attack heroes

Two heroes of the Fishmongers’ Hall attack have seen their lives ruined after their criminal pasts were exposed.

Images of John Crilly using a fire extinguisher to tackle Usman Khan on London Bridge were seen across the world.

Mr Crilly, 50, was jailed in 2005 for the murder of Augustine Maduemezia, 71, who died in a robbery after being punched by his accomplice. The murder conviction was replaced with manslaughter in 2018. Mr Crilly had been out of jail for 11 months when he confronted Khan.

But he now cannot find anyone prepared to rent a room to a man with a criminal record. ‘I am trying to get into a homeless pod,’ he said yesterday.

Gareth Evans, 33, was another former criminal attending the rehabilitation conference. He attempted to comfort Saskia Jones, 23, after she was stabbed.

‘I was trying to make sure she felt comfortable and safe,’ he said.

Mr Evans said: ‘I am having flashbacks and nightmares. I have asked for help, some therapy, but am just getting passed around the system.’

It left Khan free to tape a knife to each hand and kill two and injure three others at the event. He was shot dead by police minutes later on London Bridge.

In an interview with the Mail, Mr Merritt said: ‘Ultimately it’s the Government’s responsibility – it’s the Ministry of Justice and the Home Office who dropped the ball.

‘They had six years to decide what to do with Khan before he left prison and they messed it up. They just threw him into a haphazard system, which wasn’t designed for terrorist offenders.’

In a stinging attack, Saskia’s uncle Philip Jones added: ‘It is beyond understanding and astonishing that not one of the state agencies sufficiently considered the associated risk and therefore questioned the wisdom of sending Usman Khan unaccompanied to London.’

The jurors were directed by Coroner Mark Lucraft QC to conclude that Mr Merritt and Miss Jones were unlawfully killed by Khan. They concluded their verdict by expressing ‘heartfelt condolences’.

Khan was released from a maximum security jail in December 2018 after serving eight years for being part of a terror cell plotting to blow up the London Stock Exchange.

He had to wear an electronic tag and was supposed to be monitored by a multi-agency public protection arrangement (Mappa), made up of prison, probation and police officers.

Mappa knew that Khan had spent his entire jail term trying to radicalise, bully and forcibly convert other prisoners.

But astonishingly, officials believed he had changed his ways and sanctioned his trip to London. MI5, which had evidence of Khan’s desire for jihad, and the police both chose not to send an escort.

Speaking from Jack’s family home in the village of Cottenham, Cambridgeshire, his mother told the Mail: ‘The whole Mappa process was totally dysfunctional.

‘It’s life or death that they get these things right. It is catastrophic if that goes wrong. It is unforgivable.’ 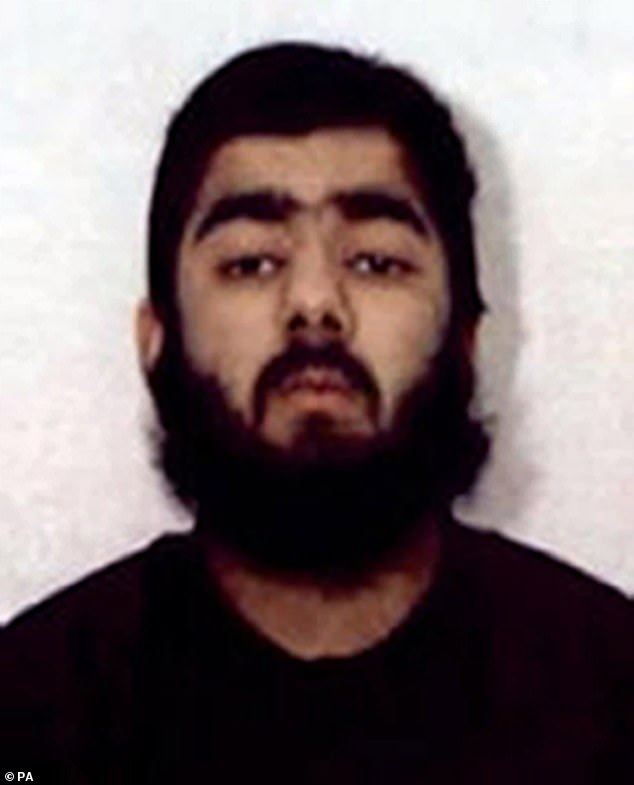 Mrs Merritt added: ‘There’s no question in our minds that he was anything other than just as dangerous when he came out of prison.’

Mr Merritt said: ‘Everybody seems to have been walking around with their eyes closed and not seeing what they didn’t want to see. Mappa was a shambles. It was badly run. They didn’t know what they were dealing with.’

Mr Merritt said there remains troubling questions as to why intelligence gathered by MI5 about Khan’s desire for an atrocity was not widely shared.

Despite the attack, they continue to support the rehabilitation ideals of Learning Together and reject the idea of longer prison sentences for terrorism offenders.

Assistant commissioner Neil Basu said: ‘The fact there were omissions or failures in the management of the attacker and in the sharing of information and guidance by the agencies responsible is simply unacceptable and I’m so deeply sorry we weren’t better at this in November 2019.’

An inquest jury for the victims of the Fishmongers’ Hall terror attack found ‘omission or failure’ in the management of Usman Khan in the community by MI5 and the police contributed to the deaths.

Asked to give a explanation for the conclusion, they issued a series of bullet points:

At the time of his release in 2018, Khan – a convicted terrorist – was assessed as being a ‘very high risk of serious harm’ to the public by a prison psychologist.

MI5 had even passed on ‘uncorroborated’ intelligence to police that Khan was preparing to return to his ‘old ways’ and that he aspired to carry out an attack. But the Mappa panel was only told of the ‘old ways’ strand, which was labelled ‘low grade’, jurors were told.

MI5 and counter-terrorism police had also launched an investigation into Khan which was still ongoing at the time of the attack. However, Khan’s probation officer and the Mappa chairman were unaware of the probe.

A senior MI5 officer told the inquest jury that the intelligence service remained ‘sceptical’ about Khan’s compliance with his licence conditions following his release, but did not counsel caution.

One of Khan’s mentors recorded an incident when the terrorist became angry and then quickly covered it up. Only much later did the mentor describe being fearful at witnessing Khan with ‘hate’ in his eyes and ‘evil intent’.

The Mappa panel, made up of largely police and probation officers, met 12 times to discuss Khan’s case.

When in August the proposed unescorted London event in November was put forward by the Probation Service, there was no record of it having been positively approved by Mappa. Jonathan Hough QC, for the coroner, suggested there was ‘a collective blind spot’ about the trip and its associated risks.

Panel chairman Nigel Byford said the decision should have been recorded in minutes but insisted no-one raised any objections about it at the time.

Sonia Flynn, executive director of the Probation Service, told jurors that the decision to allow the London trip should not have been left to one probation officer and there should have been a risk assessment.

Probation officers assigned to his case were ‘inexperienced’ in dealing with terrorism offenders, and did not have enough time to spend with Khan, it was claimed.

By September 2019, Khan was exhibiting some of warning signs raised by the prison psychologist in her report the year before. He had failed to find a job and was increasingly socially isolated, spending much of his time at home playing on his Xbox.

From the time Khan moved out of approved premises and into a rented flat, Prevent police officers visited him twice, spending just 18 minutes with him, the court heard.

The security services learned of the London trip in November 2019, just 11 days before the event. In her evidence, the senior MI5 officer conceded that a discussion around the risks at the joint operations team meeting ‘would have been helpful’.

But she said it would have taken 24/7 surveillance to have foiled the lone wolf knife attack, which would have been unwarranted on the information they had at the time.

Learning Together co-founder Dr Ruth Armstrong said she was unaware of intelligence on Khan and had she known, he would not have been invited to Fishmongers’ Hall.

Jurors were told the organisation made no risk assessment of the event beforehand. Research associate Simon Larmour, who accompanied Khan from Euston station on the morning of the attack, said he only knew of his terror conviction through a Google search.

Staff at Fishmongers’ Hall said they were not warned that a convicted terrorist was among the delegates. There were no bag searches on the door or knife arches at the venue, jurors heard.

Counter-terrorism prison security governor Steve Machin, who was among the guests, noticed Khan was wearing a bulky coat, which it later transpired concealed a fake suicide vest. He told jurors he was not in a work ‘headspace’ so accepted Khan’s ‘plausible’ explanation.

Later that day, Khan strapped knives to his hands and fatally stabbed Saskia Jones and Jack Merritt before being shot dead on London Bridge.

Previously, the Mappa panel had regarded Khan’s association with offender educational group Learning Together as positive and something to be encouraged.

Bridge, families’, knif, London, of
You may also like: