Family outings to the supermarket could be banned as part of tough new rules to stop the spread of coronavirus.

Stores will be encouraged to impose a ‘shop alone’ policy after officials became concerned too many people were seeing it as a ‘trip out’ for their family.

Retail bosses are also expected to be told to provide more hand sanitising stations, and clearer signage to avoid trolley jams of customers.

The current restrictions state: ‘You may leave the home to: shop for basic necessities, for you or a vulnerable person,’ but does not specify how many people are allowed to attend a shopping trip. 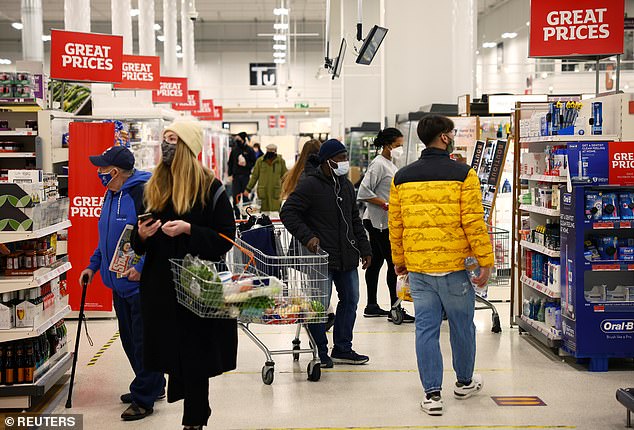 But it is feared supermarkets have become a hotbed for spreading coronavirus because they are one of the few indoor places left open during lockdown.

‘We’re looking at ways to make supermarkets as safe as possible for both shoppers and the people who work there,’ a government source told The Sun.

‘It’s clear that some customers see the visit as a bit of an outing. The whole family goes together and they end up talking to friends who they bumps into while there.

‘Unlike other shops, supermarkets are allowed to stay open because they provide food. People should only visit them to buy what they need – essentials. And they should not be going in groups.’

But some ministers are resisting the tighter rules, believing stores do not have the staff to deal with groups of people coming in.

Supermarkets have already strengthened their position on things like mask wearing, with Sainsbury’s, Morrisons, Tesco, Asda, Waitrose and M&S reintroducing bouncers at the door to ensure customers are wearing face coverings. 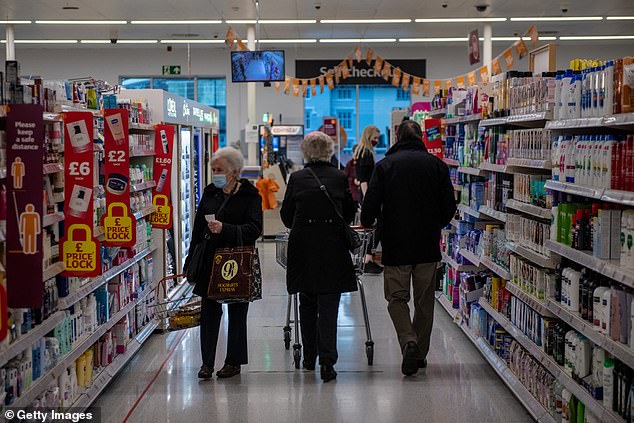 But some ministers are resisting the tighter rules, believing stores do not have the staff to deal with groups of people coming in

Bouncers were in place at the start of the first lockdown in March to enforce social distancing and the wearing of face coverings, but began to vanish as the threat posed by Covid-19 waned during the summer, leading to an increasingly ‘lax’ attitude from shoppers who were increasingly seen maskless.

In a further step, the government is actively considering increasing the maximum penalties for flagrant rule-breakers.

Fines for breaking the lockdown start at £200 for the first offence, lowered to £100 if it is paid within the first 14 days.

Family, Set, supermarket, t, trips
You may also like: