Fans are outraged after Reading Festival headliners Rage Against The Machine said they would not perform.

The band said they would not attend the festival as planned as they cancelled their 2022 European tour dates citing medical advice. This also includes their planned performance at Leeds Festival.

Rage Against The Machine, best known for their songs ‘Killing In the Name’ and ‘Bulls on Parade’, had been set to headline at Reading alongside The Arctic Monkeys, Dave and Halsey.

The rock group is set to be replaced by pop band The 1975 at the festival at the end of August. 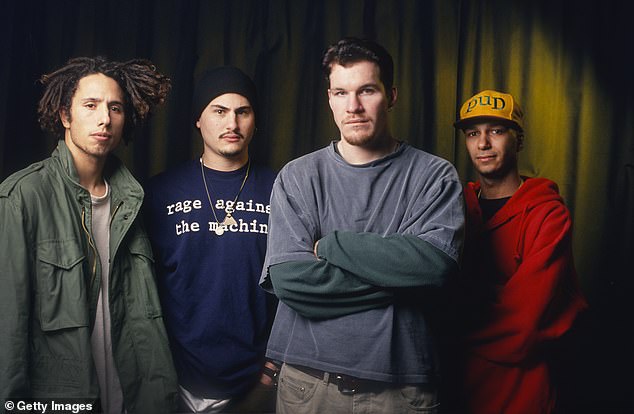 Rage Against The Machine had been set to headline at Reading alongside The Arctic Monkeys, Dave and Halsey. They have been replaced by The 1975

Lead singer Zack de la Rocha said he will rest at home after the group play their gig at Madison Square Garden, New York on August 14.

Fans have expressed their frustration at the cancellation at Reading Festival, with some asking for their money back.

One said on Twitter: ‘Replacing Rage Against The Machine With 1975 is like swapping Slayer with S Club 7.’

Another suggested a large number of festival tickets would be refunded because of the news, saying: ‘There will be hundreds for sale from disappointed RATM fans.’

One fan expressed their disappointment by adding: ‘Boooooo’

Writing a message to Ticketmaster, a festivalgoer asked for a refund following the band’s cancellation. They said: ‘I have a Sunday ticket to Reading Festival and would like to request a refund, as the main headliner Rage Against The Machine has cancelled and will not be performing. I would appreciate some help.’ 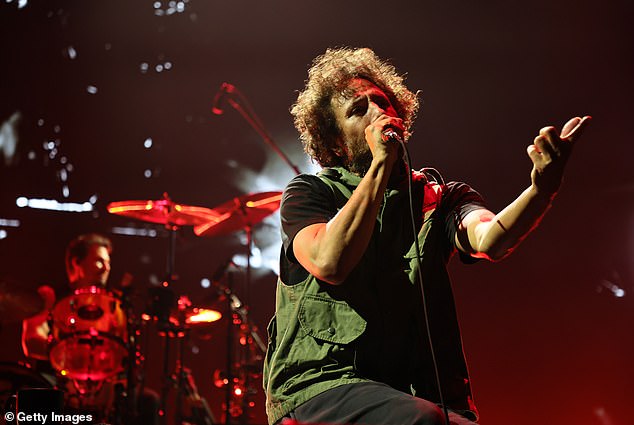 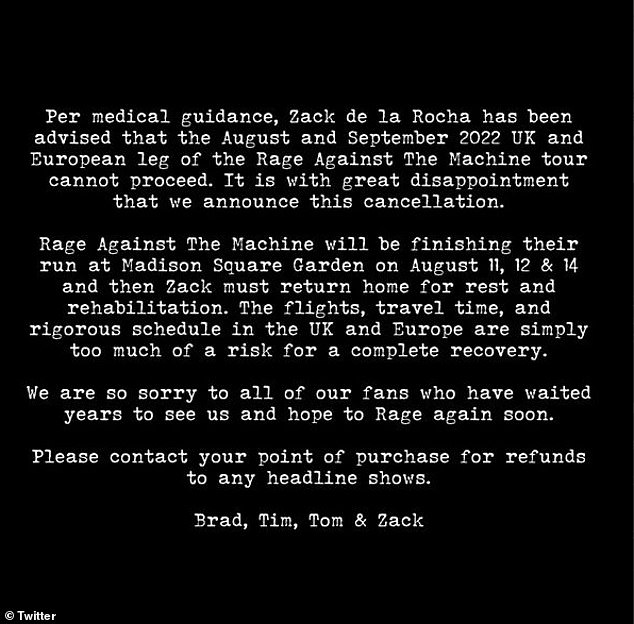 A Twitter user was even more critical of the news by asking: ‘Has there ever been a worse lineup than this year’s?’

Another asked: ‘Ticketmaster. I’m pursuing a refund for Reading Festival as I have a day ticket for Sunday and the headliner, Rage Against The Machine have cancelled. Please can you help?’

There were dozens of other requests for refunds online, including some fans suggesting they would give their tickets away for free.

Ticketmaster responded to fans on Twitter by asking them to contact them by direct messages. It is not known if any refunds have been offered by the festival or any ticket company.

Rage Against The Machine announced online they would cancel their planned gigs after the end of this weekend.

The band said in a statement: ‘Per medical guidance, Zack de la Rocha has been advised that the August and September 2022 UK and European leg of the Rage Against the machine tour cannot proceed. It is with great disappointment that we announce this cancellation.

‘Rage Against the Machine will be finishing their run at Madison Square Garden on August 11, 12 and 14 and then Zack must return home for rest and rehabilitation.

‘The flights, travel time, and rigorous schedule in the UK and Europe are simply too much of a risk for a complete recovery.

‘We are so sorry to all of our fans who have waited years to see us and hope to Rage again soon.

‘Please contact your point of purchase for refunds to any headline shows.’