London: Britain’s COVID-19 infections are rising sharply with Omicron subvariants sparking new outbreaks across the country and raising concerns that the latest wave could upend health systems and businesses.

The number of people testing positive for COVID-19 is estimated at 2.3 million in the week through to June 24, up 32 per cent from the previous week, according to data published by the Office for National Statistics on Friday. News of a countrywide jump in cases comes a day after regulators reported that England’s hospital admissions were climbing again, with intensive-care cases spreading among older age groups. 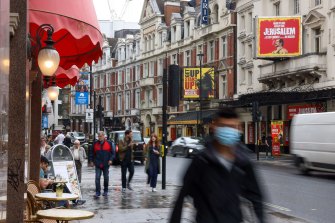 A quiet Regent Street, London’s premier shopping thoroughfare on Wednesday. The UK is struggling to shake off the lingering effects of COVID.Credit:Bloomberg

The rise in hospitalisations is still far below previous waves, and widespread vaccination has made the pandemic far less deadly. Still, the latest surge underscores how the pandemic is still taking a toll in even one of the most vaccinated places in the world.

“The constant bombardment of waves we are seeing does cause clinical impact that is not to be underestimated,” said Stephen Griffin, associate professor in the School of Medicine, University of Leeds.

The UK is not alone with the coronavirus rearing its head across multiple countries in Europe despite the northern summer – including Germany, France and Italy – with renewed rapid transmissions.

Britain’s latest wave is fuelled by two highly contagious Omicron subvariants – BA.4 and BA.5 – which now make up more than half of new COVID cases in England, a government report last week found. The coronavirus is estimated to be infecting every 1 in 30 people in England and Wales, every 1 in 25 people in Northern Ireland as well as every 1 in 18 people in Scotland, according to the ONS.

The rise in prevalence of these subvariants has also led to an increase in hospitalisations and ICU admissions in some other nations, the World Health Organisation said in a report last week. Still, there’s currently no evidence that they cause more severe illness than previous Omicron variants, health officials said.

Britain has largely dropped its COVID restrictions since early 2022. Face covering is no longer compulsory in most places and border entry rules related to COVID have largely ended. The government is urging elderly people, as well as those living in care homes or who are clinically vulnerable, to get a booster for protection against serious illness.

Without any mitigations, such as lockdowns, Britain is relying on vaccination to prevent infection and severe disease, said Griffin. He said a considerable minority of people were still not inoculated, however, “plus we should remember that any severity of infection can lead to long COVID,” he said.

The situation could become even more challenging in Britain when the colder season approaches, putting the government in a difficult position at a time the country is facing a cost-of-living crisis with the highest inflation in four decades.

“A return to masking, improved ventilation and some degree of social distancing may be useful to control the COVID-19 and seasonal influenza case numbers” into the colder months, said Julian Tang, honorary associate professor and clinical virologist at the University of Leicester. “But the impact of the cost of living crisis may not make some of these measures acceptable to business already struggling to make ends meet.”

UK vaccine advisers have recommended a new round of boosters for elderly and vulnerable people, saying the threat could mount again as winter approaches. The new campaign would follow spring boosters for a more limited population.