Fauci, 80, is under fire amid reports that the National Institute of Allergy and Infectious Diseases allegedly used thousands of taxpayers dollars to fund experimental testing on dogs. 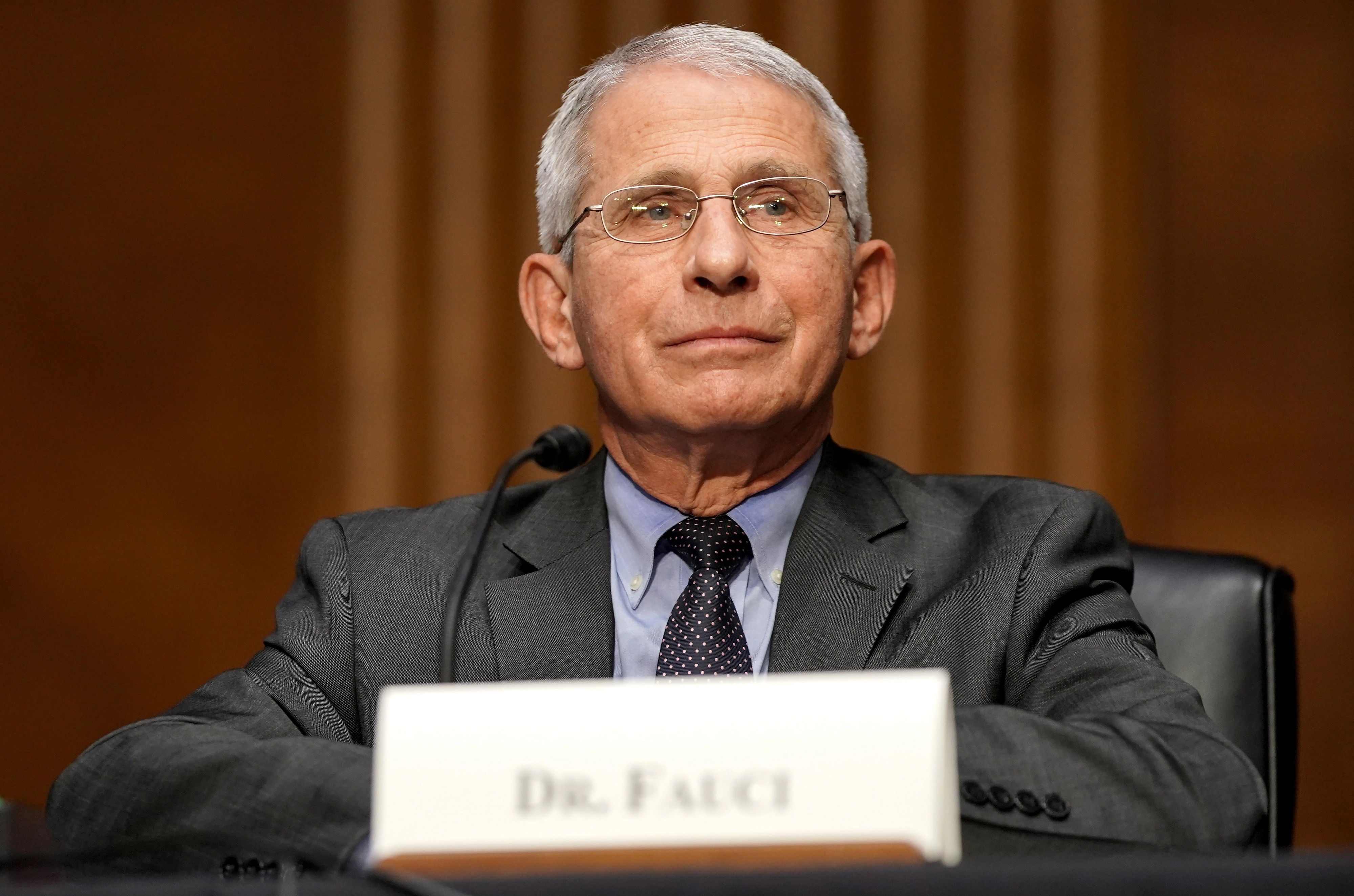 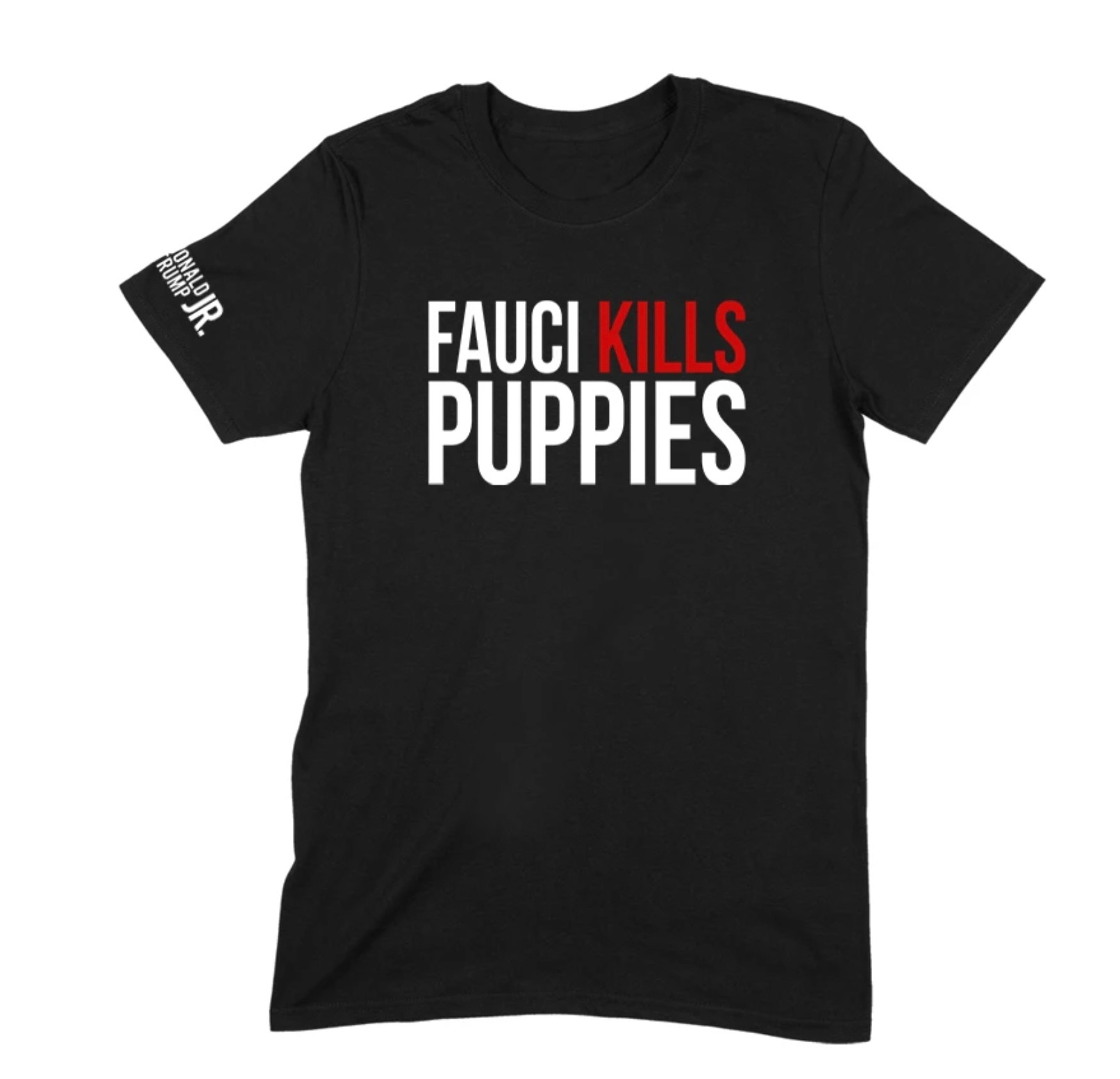 Trump Jr is selling a selection of t-shirts and hoodies with the phrase “Fauci lied, puppies died” emblazoned on the front.

On his Instagram page, there is a link to his website where the clothes can be bought.

The villain has been replaced by the White House boffin, dalmatians have been swapped for beagles, and the poster is titled “Dr. Anthony Fauci, 101 Beagles.”

Some of the animals allegedly had their vocal cords removed to muzzle their barking, according to The Hill.

It's alleged that the NIAID sent a $375,800 grant to a lab in Tunisia and researchers at the White Coat Waste Project claim the dogs were locked in cages with sandflies.

A letter, spearheaded by South Carolina congresswoman Rep. Nancy Mace and signed by both Democrats and Republicans, urges the NIAID to respond to the allegations, Newsweek reports.

The lawmakers say they have “grave concerns about reports of costly, cruel, and unnecessary taxpayer-funded experiments on dogs”.

The letter states: "This cruel procedure – which is opposed with rare exceptions by the American Veterinary Medical Association, the American Animal Hospital Association, and others – seems to have been performed so that experimenters would not have to listen to the pained cries of the beagle puppies. This is a reprehensible misuse of taxpayer funds."

Cawthorn told legislators Tuesday: “Dr Fauci has forsaken his Hippocratic oath and exchanged it for a mantle of unchecked power.

“His policies shuttered the US economy, drove our country into financial upheaval, and violated the rights of millions of Americans.”

Kentucky Senator Rand Paul, who has clashed with Fauci over recent months, called for the health boffin to be dismissed.

He told Axios on HBO Sunday: “He should be fired. The thing is, is just for lack of judgment of nothing else, and I, you know, he's probably never going to admit that he lied, he's going to continue to dissemble and try to work around the truth and massage the truth."

Paul has accused Fauci of lying about research funding at the Wuhan lab that some suspect of being the source of the Covid-19 outbreak.

The senator last month called for the doctor to be jailed for five years.

He told Fox News' Sean Hannity: “He has definitely lied to the American public and he should be held responsible. I don’t think the Biden Department of Justice will do anything with it.”

Fauci denied the allegations. The doctor said: “You are entirely and completely incorrect. The NIH has not ever and does not now fund gain of function research in the Wuhan Institute.”

Gain-of-function research involves taking a virus and making it more transmissible or pathogenic.

The documents appear to show the National Institute of Health did give grants to a nonprofit that funneled federal funds to the Wuhan Institute of Virology for bat coronavirus research, as reported by the New York Post.

According to the documents, the US government gave $3.1million to health organization EcoHealth Alliance which went into research on bat coronavirus research at the Wuhan Institute of Virology.

The phrase “Arrest Fauci” circulated on Twitter as calls grew for the boffin to be jailed.

They shared a meme of a frantic-looking Fauci running away while being chased by a pack of dogs.

Others shared a picture of their pooch with the caption: “My dog Rip says 'Arrest Fauci'."

While another social media user tweeted an image of their two dogs standing on their hind legs looking out of the window.

They said: “My puppies are on the lookout for Doctor Death Fauci.”

Hutchins died of her injuries after being shot on a movie set in New Mexico while Joel Souza was injured.

The phrase “Guns don’t kill people Alec Baldwin kills people” is emblazoned on the front of the shirts.

Trump Jr was slammed online as one person wrote in a review: “What a hateful thing to sell. Imagine if Halyna Hutchins' family, especially her young son, saw someone walking around wearing this horrible piece of trash…sold by a piece of trash."

Another reviewer said: “Your family’s disgusting, petty behavior never ceases to amaze me. You are truly a stain on the country.” 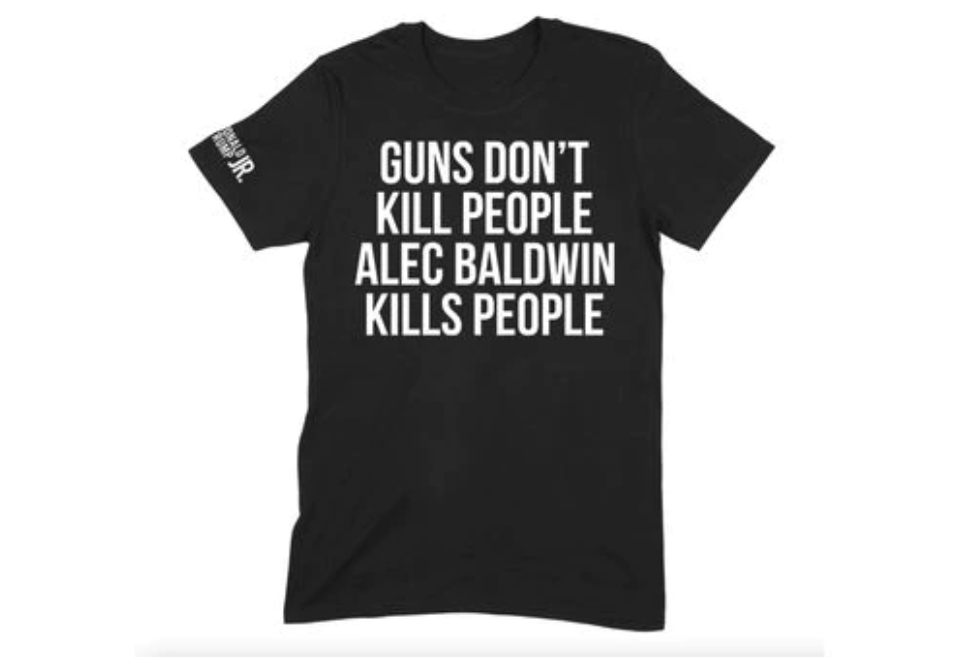 a, called, Fauci, kil, puppy
You may also like: