Christopher Wray, who was appointed as the FBI’s director in 2017, said ‘violence’ against the FBI and the Department of Justice employees is ‘not the answer’.

‘I am always concerned about threats to law enforcement,’ Wray said on Wednesday. ‘Violence against law enforcement is not the answer, no matter who you’re upset with.’

Wray made the remarks following a news conference during a long-planned visit to the agency’s field office in Omaha, Nebraska, where he discussed the FBI’s focus on cybersecurity.

He declined to answer questions about the hours-long search Monday by FBI agents of Trump’s Palm Beach, Florida resort.

As a result of a surge in threats against Wray, Garland their staff, they are considering steps to improve their security.

Both Wray and Garland already travel with armed security guards. But there are discussions to step up protections as violent rhetoric circulates online. 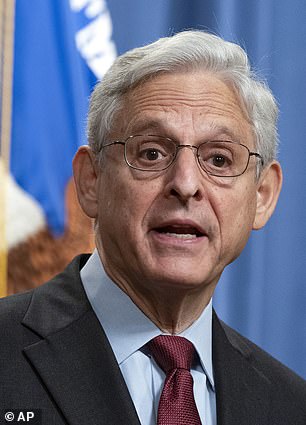 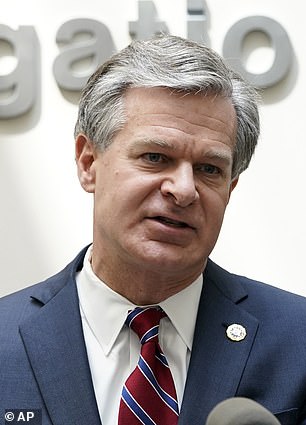 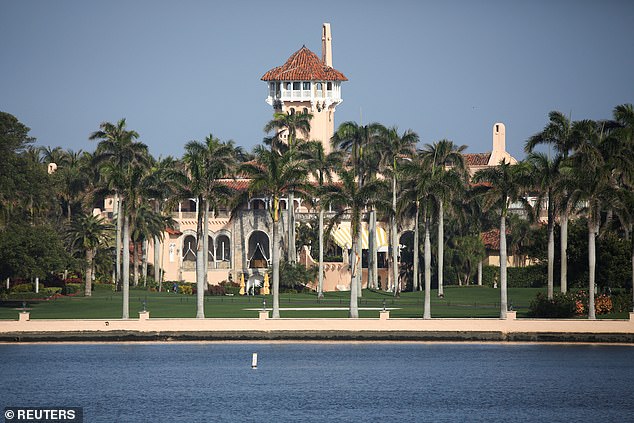 The search was reportedly related to the National Archives and Records Administration, which is charged with safeguarding presidential records that belong to the public 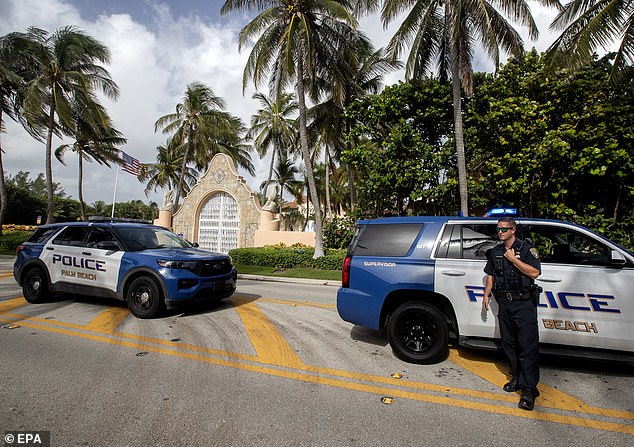 Mar-a-Lago is closed for the summer. Its well-heeled members generally leave Florida for cooler locations, only returning for the winter. Trump was in New York on Monday

It has been easy to find the threats and a call to arms in those corners of the internet favored by right-wing extremists since Trump himself announced the search of his Florida home.

Reactions included the ubiquitous ‘Lock and load’ and calls for federal agents and even Garland to be assassinated.

On Gab – a social media site popular with white supremacists and antisemites – one poster going by the name of Stephen said he was awaiting ‘the call’ to mount an armed revolution.

‘All it takes is one call. And millions will arm up and take back this country. It will be over in less than 2 weeks,’ the post said.

Another Gab poster implored others: ‘Lets get this started! This unelected, illegitimate regime crossed the line with their GESTAPO raid! It is long past time the lib socialist filth were cleansed from American society!’

‘I will support a complete dismantling and elimination of the democrat brown shirts known as the FBI,’ wrote Republican Rep. Paul Gosar, of Arizona, comparing federal agents with the Nazi party.

‘This is too much for our republic to withstand.’

The unprecedented search marked a significant escalation of the federal investigation into whether Trump illegally removed records from the White House as he was leaving office in January 2021. Trump continues to flirt publicly with running again for president in 2024 but has not said clearly whether he will do so.

The warrant was related to the National Archives and Records Administration, which is charged with safeguarding presidential records that belong to the public, and whether there were classified documents at Trump’s Mar-a-Lago resort in Palm Beach, Florida, according to a person familiar with the matter.

The person said the FBI took about 10 boxes of papers, but that a safe that was searched was empty.

They have used fiery rhetoric and accusations of a conspiracy against Trump to solicit cash.

‘Nothing like this has ever happened to a president of the United States before, and it’s important that you know that it wasn’t just my home that was violated – it was the home of every patriotic American who I have been fighting for since that iconic moment I came down the Golden Escalators in 2015,’ said Trump in one fundraising email.

‘I stood up to the radical left’s corruption. I restored power to the people and truly delivered for our country like we have never seen before. The establishment hated it.

‘Now, as they watch my endorsed candidates win big victories and see my dominance in all polls, they are trying to stop the Republican Party and me once more.’