Female teacher, 25, is jailed for having sex with boy pupil, 14, then using fake social media accounts to bully his friends into silence before pretending to be a 14-year-old girl in bid to smear his relative as a paedophile

A female teacher who groomed and had repeated sex with a 14-year-old pupil after becoming ‘obsessed’ with him has been jailed for five years and four months.

Fatinham Hossain, 25, of Horsham, West Sussex, was sentenced at Brighton Crown Court on Friday after admitting to sexual activity with a boy while in a position of trust and a separate count of perverting the course of justice.

Following her initial arrest in June 2020, the court heard how she spun a ‘web of lies and manipulation’ as she set up several fake social media accounts to harass the victim’s family members and to try and bribe the boy into dropping the charges.

She also posed as a 14-year-old girl and contacted a male relative of the boy in a bid to frame him as a paedophile and have him sacked and arrested, the court heard.

Through various fake accounts, she also bullied and threatened other pupils, telling them not to talk to the police.

Fatinham Hossain (pictured), 25, of Horsham, West Sussex, was sentenced at Brighton Crown Court on Friday after admitting to sexual activity with a boy while in a position of trust and a separate count of perverting the course of justice

It came after she faked a pregnancy when the boy said he had wanted to end the sexual relationship.

Hossain will be a registered sex offender indefinitely and will be subject to a Sexual Harm Prevention Order (SHPO) for 10 years after she is released from prison.

She was also issued with a restraining order to last indefinitely, prohibiting her from any contact with the initial victim and several others and barring her from entering specific areas of Horsham.

Judge Jeremy Gold told Hossain that she had embarked on a quite remarkable campaign of harassment which was ‘relentless, wide-ranging and malicious following the persistent nature of penetrative (sexual) activity over time’.

The prosecution came after an investigation by detectives from the West Sussex Safeguarding Investigations Unit.

Detective Constable Leigh Rankin said: ‘Hossain was first arrested in June 2020 following a report that she had groomed and had sex with a 14-year-old boy from a school in Horsham where she was working as a study supervisor/cover teacher.

‘A sexual relationship continued for several months during which she continued to manipulate the boy’s emotions, including claiming that she was pregnant after he had tried to end the relationship.

‘Hossain was initially released on bail for further investigation. Following this the victim, his family and friends suffered a prolonged and complex campaign of behaviour against them in an attempt to derail the investigation and avoid justice.

‘Using fake social media accounts Hossain attempted to manipulate other children, with threats being made against at least one other child should they speak to the police.

‘Through fake names, she made significant threats of harm to the boy and his family and said she would pay him to drop the charges.

‘Hossain was charged with offences in October 2020 and was bailed by magistrates. 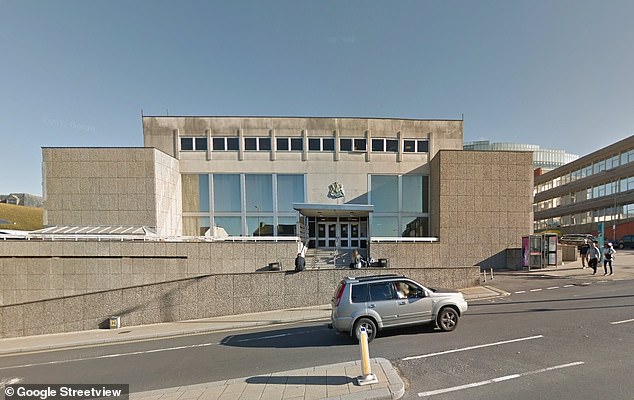 Judge Jeremy Gold told Hossain that she had embarked on a quite remarkable campaign of harassment which was ‘relentless, wide-ranging and malicious following the persistent nature of penetrative (sexual) activity over time’ (Pictured: Brighton Crown Court)

‘She then created a number of fake social media accounts using different names including that of a 14-year-old girl.

‘Using this particular account, she fabricated messages between her and an adult family member of the boy.

‘She then used these fake accounts in an attempt to have the family member lose his job.

‘She then went on to make multiple false reports to the police from further false accounts in attempt to get the adult family member arrested.’

Detective Ranking said Hossain continued to attempt to make false reports to police until March 2021, when evidence was received to show that all the allegations against the family were falsified by her.

This led to her being further charged and remanded until she was convicted.

Detective Ranking added: ‘This was a prolonged and distressing campaign and we are glad that justice has now been done for the boy and the several other people who became entrapped in Hossain’s web of lies and manipulation.’