Financial advisor, 63, is suing dog owner for £5m after suffering spinal injury when he was thrown off horse as Westie terrier ran up to them on beach

A holidaymaker left needing a wheelchair after a local’s Westie terrier ran at his horse during a ride on a Welsh beach is suing the dog owner for up to £5million.

Financial advisor Lourens Koetsier, 63, suffered a severe spinal injury when he was thrown from his horse during a guide-led canter on the sands of Druidston Haven Beach in Pembrokeshire in June 2018.

Mr Koetsier claims the accident occurred because an unleashed West Highland Terrier called Max ran under the horse, spooking it into bucking and throwing him to the ground.

The tourist, who was holidaying in Wales with his wife, is now suing for up to £5million at the High Court, saying Max’s owner, David Clifford Thomas, should have had him on a lead. 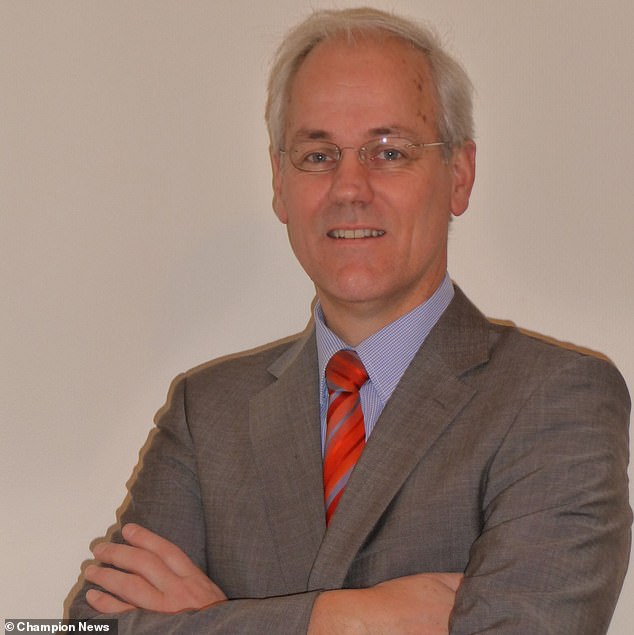 Financial advisor Lourens Koetsier (pictured), 63, suffered a severe spinal injury when he was thrown from his horse during a guide-led canter on the sands of a popular Pembrokeshire beach in June 2018

But Mr Thomas, who had had Max since he was a puppy, says there is no reason to blame his ‘small, elderly and gentle’ Westie for the accident, and denies liability.

And he insists there was no reason why he should have had to leash Max while walking him on a beach where local bylaws allow pet owners to let their dogs run freely.

According to documents filed at the London court, Dutch financial advisor Mr Koetsier and his wife Monique were on holiday in Wales when he decided to go on the ride in June 2018.

He is an experienced horseman, having owned a pony as a child and competed as an adult, riding Dutch warmblood sport horses from his teens until he was in his forties.

On the day of the accident, he paid for a guide-led canter along the mile-long Druidston Haven beach through ride providers Nolton Stables, in nearby Haverfordwest. 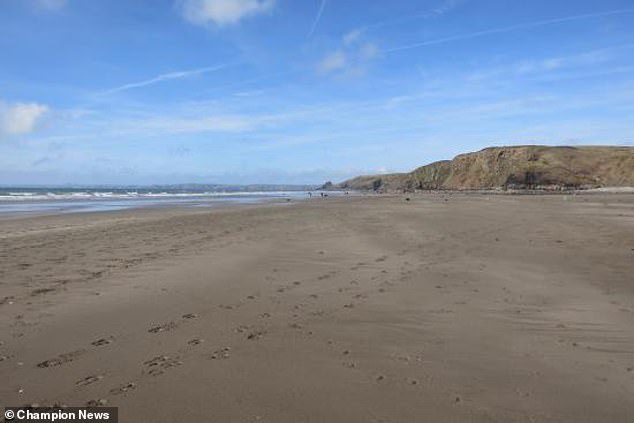 Mr Koetsier claims the accident occurred because an unleashed West Highland Terrier called Max ran under the horse, spooking it into bucking and throwing him to the ground. Pictured: Druidston Haven Beach

Mr Thomas’s dog was spotted by the riders running off its leash on the sand, as the horses took an initial canter, his lawyers say.

Then as the riders set off for a second canter Max began running towards Mr Koetsier’s group from behind, barking as it approached.

Bonfire the horse bucked in fear and threw Mr Koetsier off and to the ground.

Mr Koetsier was evacuated by air ambulance, having sustained a central spinal cord injury, which required fusion of some of his vertebrae, leaving him with incomplete tetraplegia.

He now experiences spasms and has impaired hand function, while his ability to care for himself, get around and work have been ‘substantially impaired,’ says his barrister.

He uses a wheelchair when outside, although he can walk short distances with a walking frame, and his home has had to be specially adapted to be suitable for his needs.

Mr Chapman claims that Max’s owner Mr Thomas is liable to pay compensation because he should have had the dog under control, which would have prevented the accident happening. 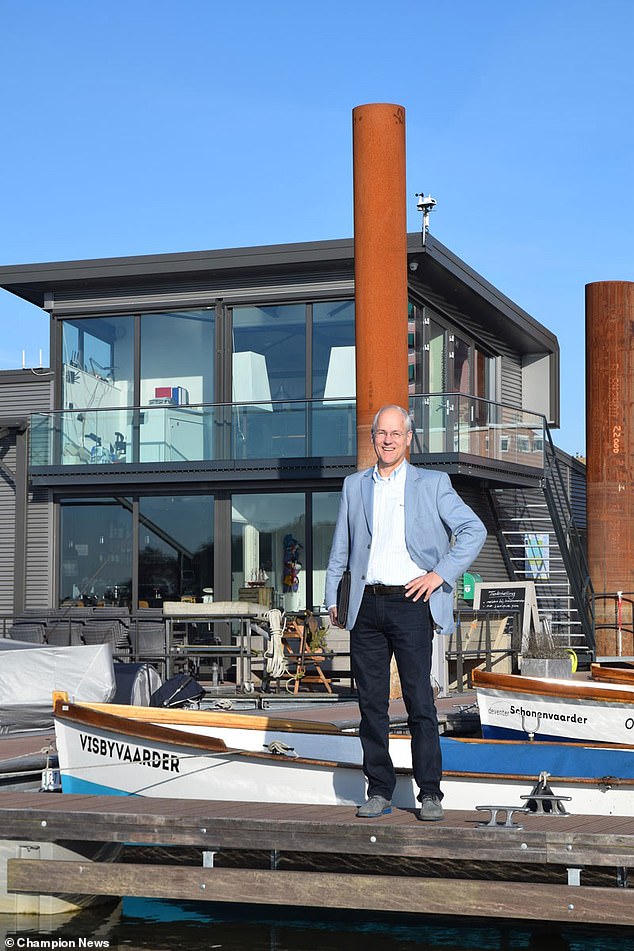 He also blames LJP Owen Ltd, trading as Nolton Stables, for allowing the group to canter a second time after Max had first been seen running off his lead.

For Mr Thomas, barrister Andrew Arentsen said there was no reason why Max should have been on his lead, since Druidston beach is regularly used by dog walkers to exercise their pets freely.

He also denied that Max was an aggressive dog, having been with Mr Thomas’ family since he was a puppy and, by the time of the accident, already ‘elderly’ at nearly 14 years old.

He says Max had shown initially only a ‘mild interest’ in the horses that day and he only ran after them when they cantered a second time.

‘Perhaps because the horses had passed at speed, perhaps out of curiosity or perhaps out of a sense of fun, Max turned and ran towards the group of horses who had just passed him,’ says Mr Arentsen.

He adds: ‘The accident occurred because the group of horses stopped, having cantered past Max, and because the claimant lost control of his horse and lost his seat upon the same.’

For LJP Owen Ltd, which operates as Nolton Stables, barrister Charles Woodhouse denies that it was at fault for Mr Koetsier’s accident, since the horse in question was perfectly comfortable around dogs.

The company, which serves 6,000 customers a year, keeps dogs loose at the stables so horses can acclimatise to them, and any which are not comfortable around dogs would be sold, he says.

He says the company does not know precisely what the horse did when the dog ran to him, but that one staff member thought he may have attempted to jump over the Westie.

‘The risk of a horse bucking, jumping, rearing or otherwise moving in such a way as to unseat its rider is an ordinary risk of riding horses of which the claimant was well aware and which he voluntarily accepted in choosing to ride Bonfire,’ he says.

The case reached court last week for a preparatory hearing ahead of a full trial of the claim at a later date. Lawyers for Mr Koetsier said they would be seeking a damages payout of up to £5million.

Kate Moss: Johnny Depp 'never pushed me, kicked me or threw me down any stairs'