Helsinki: Finland’s Prime Minister Sanna Marin has apologised to the public after a photo surfaced of her in a nightclub after her foreign minister tested positive for COVID-19.

“I did wrong. I should have considered the situation more carefully,” Marin said in a television interview by public broadcaster Yle on Wednesday night (Thursday AEDT).

“I should have used better judgment on Saturday night,” she said. “I’m really sorry that I didn’t understand how to do this.”

Marin said she decided not to cut her night out short after being told she had been exposed to the coronavirus the day before, she wrote on Facebook on Monday after a Finnish gossip magazine published a video of Marin in the Butchers Nightclub. Witnesses told the magazine, Seiska, that she was dancing until 4am.

Marin, 36, became the world’s youngest leader when she was elected at the age of 34 two years ago as part of a coalition of centre-left parties.

Finland, with a population of around 5.5 million, has not suffered as badly during the pandemic as many other European nations, recording about 196,000 cases and 1384 deaths.

But coronavirus case numbers have recently surged, with more than 3000 new cases reported on the same day Marin went clubbing, up from a low of 65 new cases a day in June. More than 73 per cent of Finland’s population is double-vaccinated.

Marin was not the only member of the government to ignore the nation’s own laws about isolating after COVID exposure. 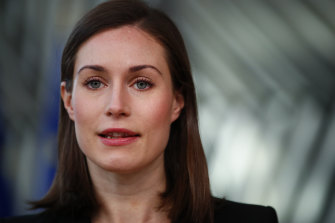 Sanna Marin, 36, is the youngest leader in Europe and one of the youngest in the world. She was elected two years ago, aged 34. Credit:Reuters

Economic Affairs Minister Mika Lintila attended a floorball match between Finland and Latvia on Sunday despite being advised to avoid contact with others, Helsingin Sanomat newspaper reported on Wednesday.

The ministers were exposed on Friday at a meeting attended by Foreign Minister Pekka Haavisto, who on Saturday tested positive for COVID-19. 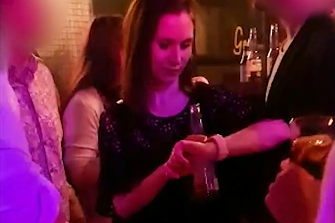 A still of Sanna Marin out at a nightclub. Credit:Seiska magazine

Marin said she was at a restaurant when she received a phone call from her state secretary informing her about the exposure.

“He said ministers would not be quarantined because they all have been vaccinated twice,” Marin wrote on Facebook, explaining why she continued socialising.

The Prime Minister’s office later said it had sent the exposed ministers two text messages on Saturday recommending that they avoid contact with other people.

Marin said she had left her official phone at home and instead relied on aides reaching her on her personal phone. 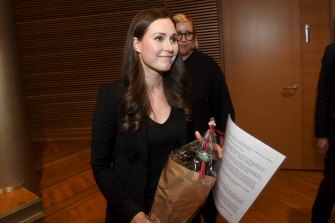 Marin has since taken two COVID-19 tests that were negative. Lintila and Kaikkonen have also tested negative.

Finland’s opposition condemned Marin as “irresponsible”, arguing that she should have known to isolate voluntarily rather than wait for advice.

Arja Juvonen, a member of parliament from the right-wing Finns party, told broadcaster Yle that Marin acted like she didn’t care about her responsibilities when she left her phone at home, which violated ministerial policy.

Marin’s apology was delivered on the same day that UK Prime Minister Boris Johnson apologised after video was released showing Downing Street staffers joking about a secret Christmas Party at a time when Londoners were under a strict lockdown.