A $24 million home on Sydney’s lower north shore has gone up in flames overnight, with investigators left wondering what started the blaze.

Emergency services were called to the waterfront home on Cliff Road, Northwood, just after 11pm on Saturday night to find the house, which boasts spectacular views, tennis court and boathouse, alight and flames leaping from the roof into the air. 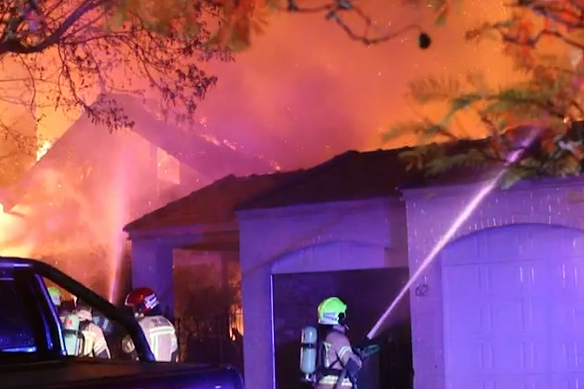 Firefighters were called just after 11pm on Saturday after reports a home in Sydney’s lower north shore was alight.Credit:Nine News

NSW Fire and Rescue said about 30 calls were made to triple zero, with 12 trucks responding and 50 firefighters. There were concerns the fire would spread to adjoining properties, but firefighters were able to control the blaze to the initial property and extinguish it within two hours.

There were no injuries.

NSW Fire and Rescue investigators and police forensics will now comb the site to determine the house of the fire, but say it is too early to indicate whether it is suspicious or not.

The home was originally built in 1915, and sold in November 2021 for $24 million – the first time it had been on the market in more than 60 years. It has sweeping views of the Lane Cove River, the city and Anzac Bridge, and also has a sandstone cellar and a custom bar.