BREAKING NEWS: Republicans take first big wins of the night: Rubio and DeSantis take victory in Florida with crucial Senate and House races STILL too early to call – as more polls close across the country

But control of the House and Senate remains up in the air after several states saw polls close at 8 pm ET.

The DeSantis and Rubio wins in the Sunshine state cemented Republicans’ grip there. Donald Trump has made it his new home state and is spending election night at his Mar-a-Lago estate in Palm Beach.

DeSantis’ win sets up an intriguing dynamic for the next two years. He’s rumored to be considering at 2024 bid. Trump, who helped DeSantis win his first gubernatorial race, will announce his White House intentions next week.

Trump held a campaign rally with Rubio in Miami on Sunday while DeSantis held a competiting rally in another part of the state. Still, the former president said he voted for DeSantis when he cast his ballot in Palm Beach on Tuesday morning.

DeSantis defeated Democrat Charlie Crist, who had previously served the state as a GOP governor before he switched parties. Crist campaigned with President Joe Biden last week but that couldn’t help him across the victory line.

Meanwhile, key Senate races in Georgia, Pennsylvania and North Carolina are too close to call as are several must-win House districts in Virginia, New Jersey, and Rhode Island.

And Republicans kept several in their column with Tim Scott’s victory in South Carolina, Rand Paul’s in Kentucky, John Boozman in Arkansas, Todd Young in Indiana, and Katie Britt’s in Alabama. Britt is the first female elected to the Senate from Alabama.

Thus far the Senate remains at a 50-50 balance, with any one contest can tip the majority to either party.

In another governor’s race, Democrat Wes Moore won the gubernatorial race in Maryland. He will be the first black governor in that state. President Biden and first lady Jill Biden campaigned for him on Monday night – their final rally of the 2022 midterm election.

In Massachusetts, Democrat Maura Healey became the first openly lesbian woman to be elected governor in the United States. 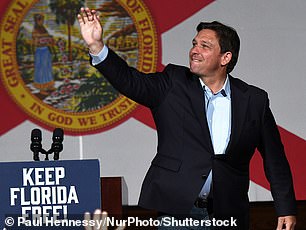 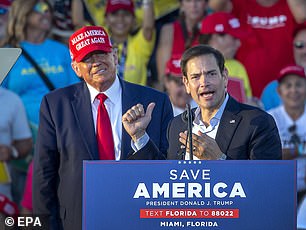 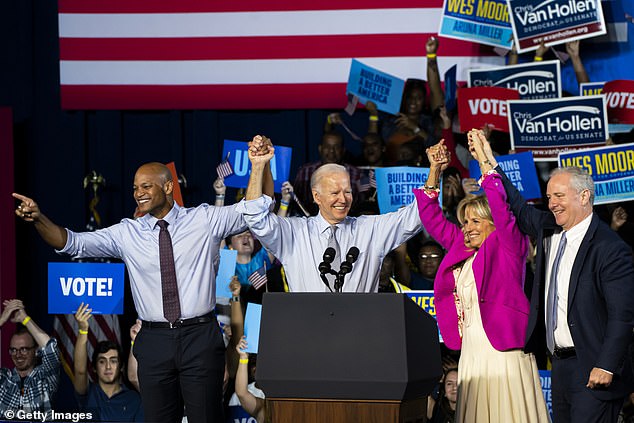 As the first polls close across the nation, about 33% of voters called inflation the most important issue as they cast their ballot, according to the exit polls of voters conducted by the television networks, with about 27% citing abortion.

Other voters cited crime, gun policy and immigration as their chief concerns.

In troubling signs for President Joe Biden, three-quarters of the electorate that voted Tuesday felt negative about the economy and more than three-quarters said that inflation has caused hardship for them and their family over the past year, the exit polls found.

They gave the president a 45% approval rating for his time in the Oval Office, citing their unhappiness with the economy.

Biden’s low numbers had many Democrats – particularly those in close contests – holding the president at arms’ length as they tried to disassociate their candidacy with his track record.

The exit polls found that about half of voters said that Biden was not a factor in their vote, while about 18% said their vote was to express support for Biden, and about one-third that it was to express opposition to him.

Several House districts in Indiana and Kentucky had polls close at 6 pm ET but the more competitive races of the night – the ones that will make or break Democrats’ majority in the House and Senate – close later in the evening. 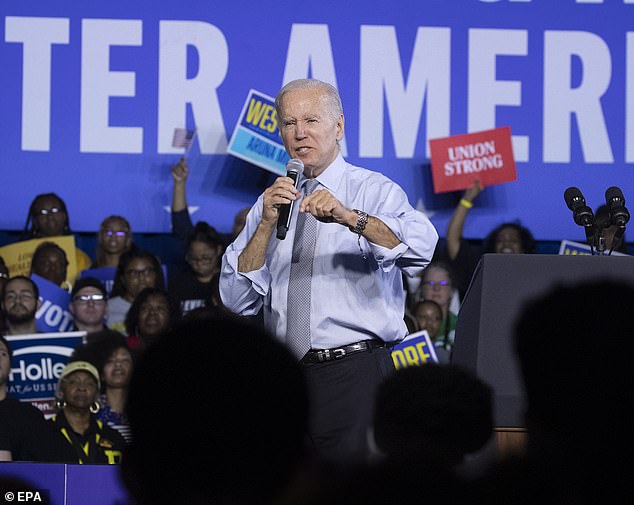 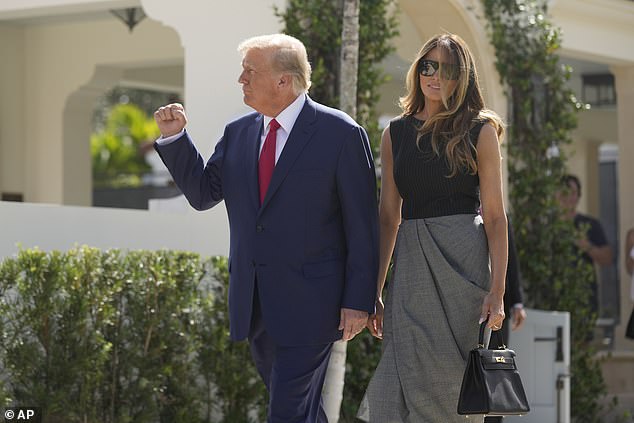 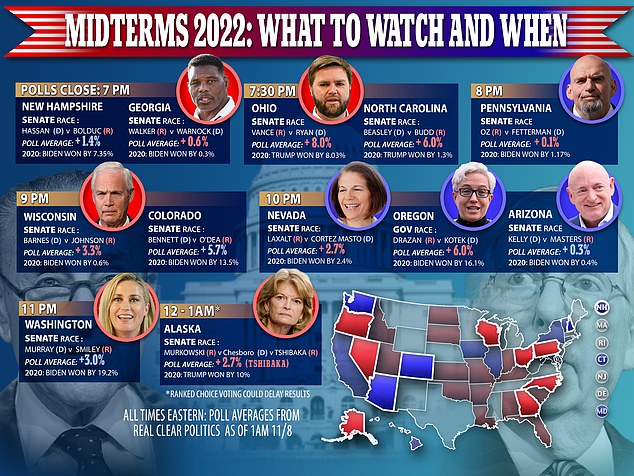 The midterms arrive at a volatile point in America.

The country is finally emerging from the COVID pandemic but facing an economic downturn, abortion rights are in danger in many states after the Supreme Court struck down Roe v. Wade, and there are threats of violence and intimidation at the polls in this first election since the January 6th insurrection.

All 435 seats in the House and one-third of the Senate, along with several governor races, are being decided on Tuesday. Results could take several days to process as votes are counted. Many Senate and governors races were polling within the maring of error.

Polls predict Republicans will make huge gains in the House – it is now a question of how many seats they take. They only need to gain five seats to take the majority in that chamber.

Meanwhile, the Senate is on a knife’s edge, with all eyes on the results in New Hampshire, Georgia, Pennsylvania, Ohio, Arizona and Nevada.

Many will see Tuesday’s results a message voters are sending about President Biden’s first two years in the Oval Office.

In the days leading up to Election Day, Biden stuck mainly to blue areas of the country, trying to get Democrats to come out for the party.

He spent Tuesday behind-closed-doors at the White House. He called into a morning radio show and did thank you calls to Democratic officials.

With election forecasters predicting a Republican win in the House, eyes are turning to the 2024 presidential contest.

Even the contenders are talking about the next presidential election. Biden has indicated he will run again and Donald Trump is promising a ‘very big’ announcement about his future on Nov. 15.

But Democrats are already looking at Biden alternatives, including pitching their picks, as the president faces low approval ratings and questions about his age.

The last two years of Biden’s final term will be shaped by what happens on Tuesday night.

‘If Biden can hold on to a Democratic Senate, then he’ll be in the catbird seat to run for reelection,’ Douglas Brinkley, a presidential historian at Rice University, told The Washington Post. ‘Now, if it’s a red wave and the Republicans win the Congress and Senate, there’s going to be a drumroll for Biden to not be the party’s nominee.’

If Republicans take only one chamber of the Congress – and they are predicted to take the House – they can tie up his presidency in investigations and legislative roadblocks going into the 2024 campaign.

Republicans are already eying rolling back portions of the Inflation Reduction Act, including its new, higher taxes on corporations and some of its climate initiatives, if they win on Tuesday.

They would, however, also need control of the Senate. Biden also still has his presidential veto pen. 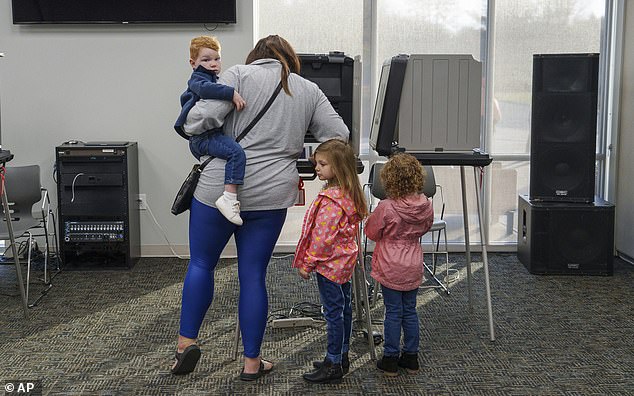 Before heading to preschool to drop off her children, Sydney Bailey votes on Election Day, in Avon, Ind. 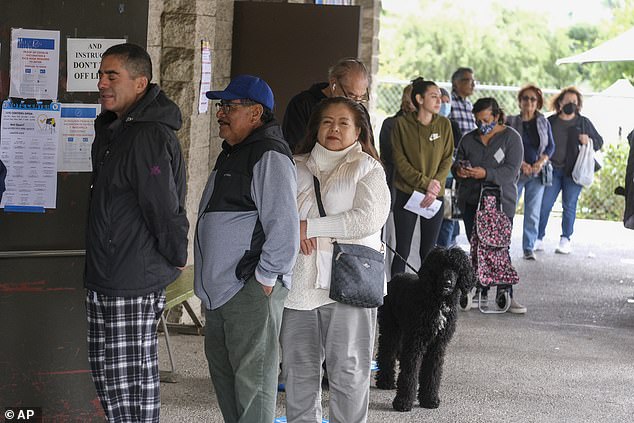 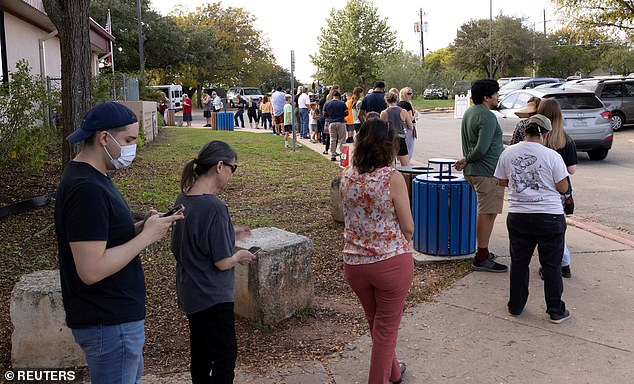 Austin Guajardo, left, and his mother, Nelda Guajardo, wait in an hour-long line at the Dittmar Recreation Center during the U.S. midterm elections in Austin, Texas 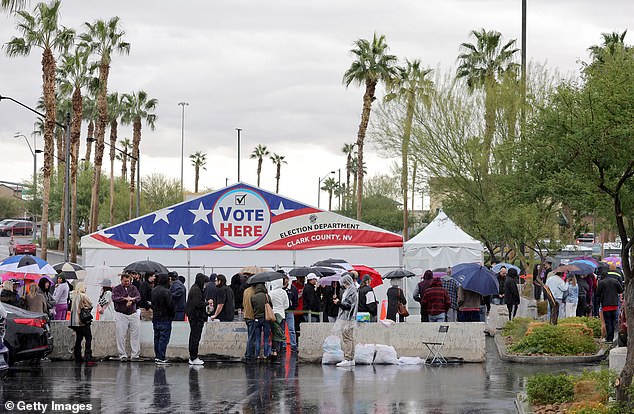 One area Republicans can have autonomy is in investigations.

Republicans in the House are getting ready to target the administration on a range of issues: from the business dealings of Biden’s son, Hunter; to what Republicans call political interference by the FBI and Justice Department; to the origins of the COVID pandemic; and the situation at the Southern border.

‘None of this is Joe Biden’s doing, and doesn’t materially affect his re-election,’ he told NBC News. ‘After taking over, these guys are going to overstep. They’re going to give the president opportunities to draw stark contrasts.’

Most presidents see their party lose seats in power during the midterm election.

Barack Obama famously called the 2010 midterm a ‘shellacking’ after Republicans won 63 House seats during the first midterm election of his presidency.