Caught hook, line and sinker! Moment LEAD WEIGHTS are found in professional fishing duo’s catch and they are stripped of tournament title and $5,000 prize – as furious crowd berates them

Two fishermen were caught cheating in a fishing tournament to make their catches seem heavier by stuffing them with weights.

Chase Cominsky from Pennsylvania and Jake Runyon from Ohio were taking part in the Lake Erie Walleye Trail Championship in Cleveland’s Gordon Park in Ohio on Friday when they were caught red-handed.

Tournament director Jason Fischer then decided to gut the fish, at which point the duo’s cheating was exposed.

Inside each of the fish were several lead balls, deliberately designed to add pounds to the pair’s catch and thus secure the title and accompanying $5,000 prize money.

‘We got weights in fish!’ Fischer announced to the gathered crowd who quickly turned angry.

Questions are now being raised about other tournaments the pair have won in the past. They have already claimed several first-place prizes and earned a considerable sum of money in various LEWT events including the 2021 championship.

The duo scored the top catch in last year’s Lake Erie Fall Brawl and attempted to claim the $100,000 prize but were disqualified. 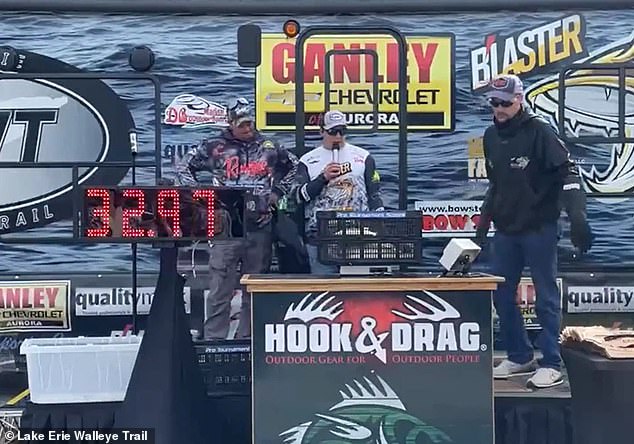 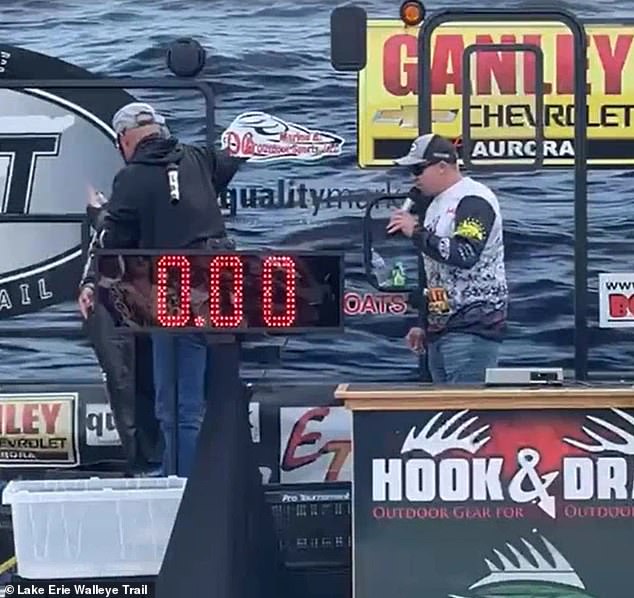 After their fish had been weighed, the pair were told to stay on for the fish to be photographed

Suspicions were first aroused in the final moments of the tournament when the anglers’ catch had to be weighed in which their five heaviest fish of the day were to be placed on the scales.

There was outrage from onlookers who demanded answers, with some threatening to call the police.

The duo allegedly stuffed the objects down the throats of the fish in order to bulk up their weight and improve their standing in the tournament.

Alongside the lead weights were also slices of other fish fillets pieced of which had been stuffed into the body of the catch, once again to increase their weight.

The dramatic discovery was filmed and posted to social media. Runyon is asked on video if has anything to say for himself but remains silent throughout

The pair have now been called out as ‘cheaters’ on the Lake Erie Walleye Trail Championship official Facebook event page and will be banned from all future tournaments.

‘Disgusted guys and gals, I’m sorry for letting you down for so long and I’m glad I caught cheating taking place in YOUR LEWT at the same time.

‘I can’t think enough to post results, but congrats Tsczyko and French and TOY Hendricks and Ulmer. Same goes to the yak and open winners. I hope you know now that when I say “you built this LEWT and I will defend its integrity at all costs”, I mean it.’ 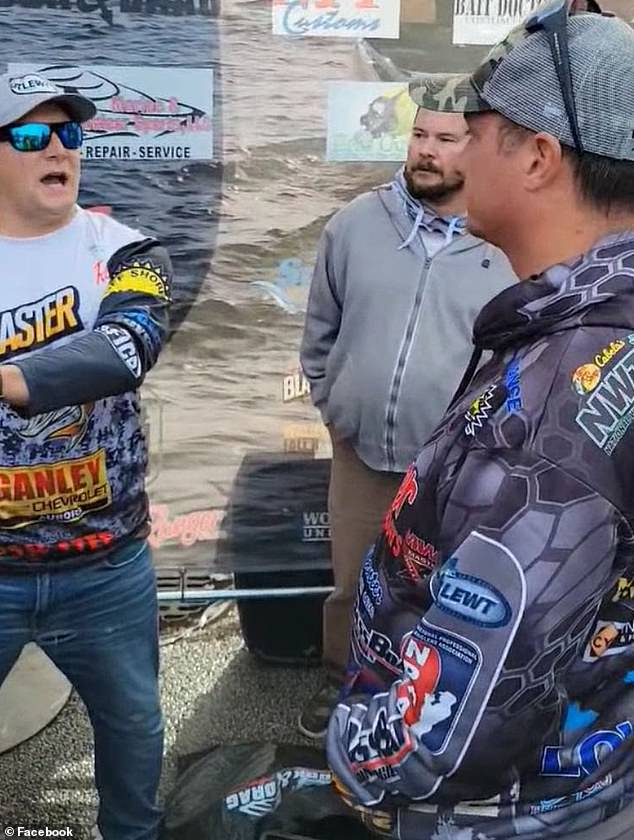 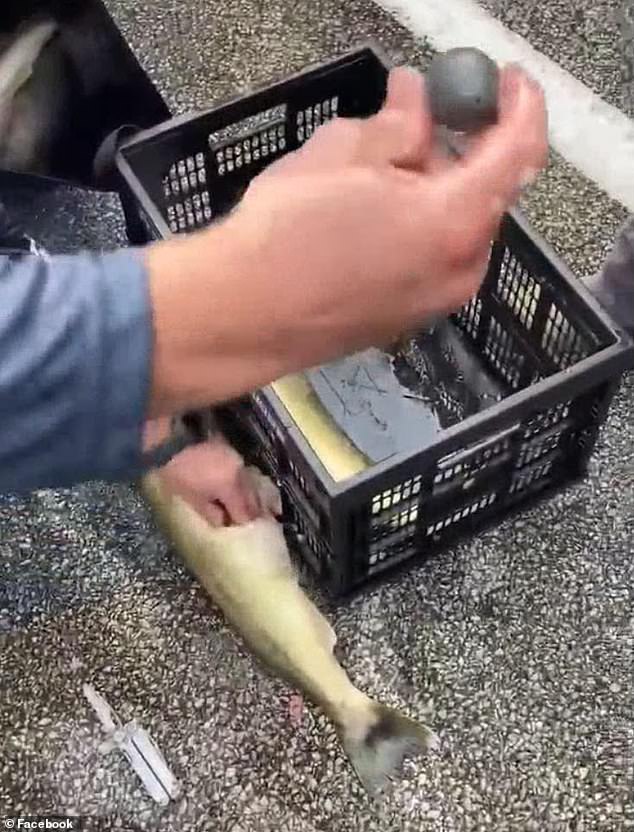 In the world of competitive fishing, by adding the weights to the fish, Cominsky and Runyon’s total poundage increased and put them on top of the leaderboard 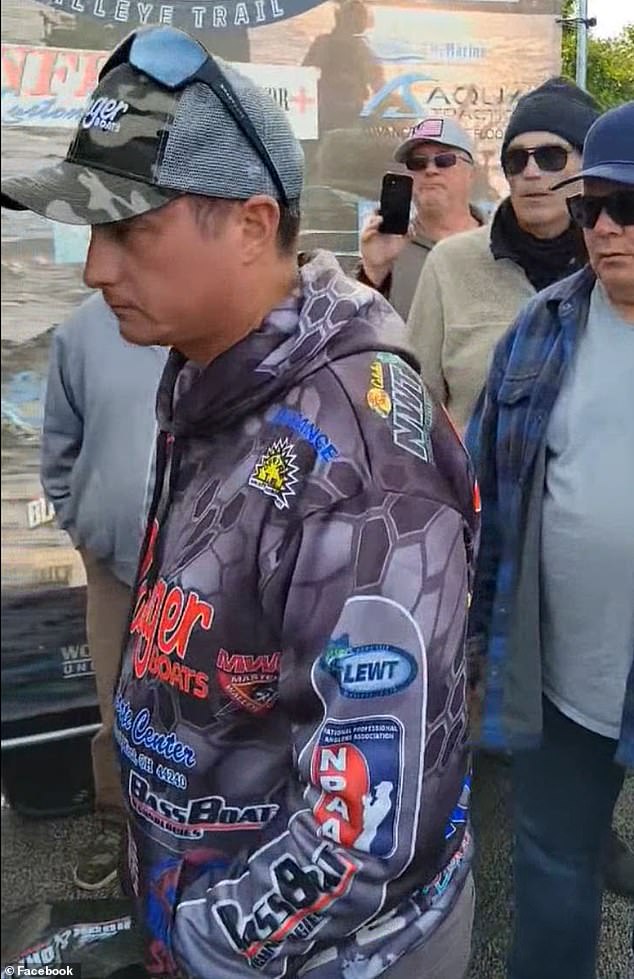 At the time, the director of the tournament did not explain why other than to say one of the men failed a polygraph test.

Runyon protested saying how the fish had been caught by following the rules and that they were innocent. He even secured legal counsel in an attempt to sue for their ‘winnings’ according to the Toledo Blade.

At another event, the Rossford Walleye Roundup in Ohio, several competitors shared their suspicions that the pair’s fish ‘looked old’ and may have been stashed away prior to the start of the event.

Following the event, the pair decided not to donate their catch to a local food bank as most of the other fisherman proceeded to do.

The organizers of these previous tournaments may now be weighing up the options of taking legal action against the pair for alleged fraud and deceptive practices.