Deon Joseph urges officials to stop making police the enemy and invest in crime control on ‘The Story.’

The robbery and killing of an off-duty Los Angeles police officer this month was allegedly the work of Florencia 13 (F13), a Latino street gang largely controlled by the Mexican Mafia.

LAPD officer Fernando Arroyos, 27, was gunned down in South Los Angeles during an attempted robbery while he was looking at houses with his girlfriend Jan. 10. Arroyos and his assailants exchanged gunfire, and one of the suspects and was hit once, federal authorities said.

Arroyos collapsed in an alley and later died at a hospital. 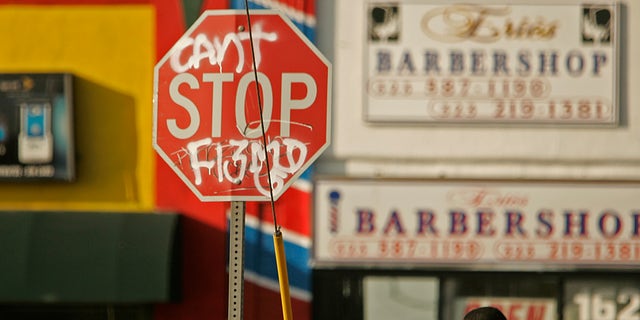 Members of the Latino Florencia 13 gang have left their tag at numerous places along a stretch of Florence Avenue in the Florence area of L.A. County.
(Luis Sinco/Los Angeles Times via Getty Images)

The three men are members of F13, Grisham is a gang associate, and they carried out the attack to increase and maintain their position within the gang, the Justice Department said.

According to The Los Angeles Times, F13 was formed in South Los Angeles in the 1950s and is largely controlled by the Mexican Mafia prison gang, which is made up of about 140 men, most of them incarcerated.

“F13 is a large, multi-generational street gang that previously has been the subject of federal prosecutions, including two large racketeering cases,” the DOJ said. 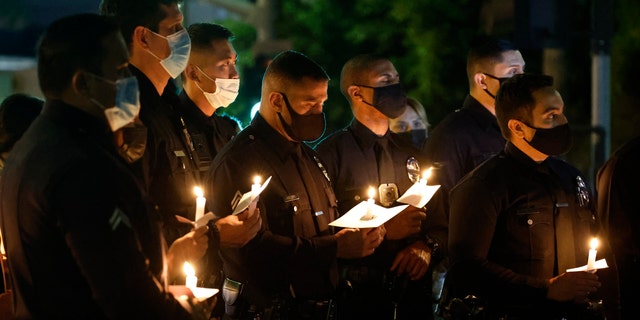 The LAPD hosted a fundraiser for Arroyos’ family Wednesday at the Olympic Division station where the officer was stationed.

“He was a really humble hard worker, always walked around with a smile, and he was just really, really nice to be around,” an officer told FOX 11. “We’re going to miss him a lot. He’s family to us.”