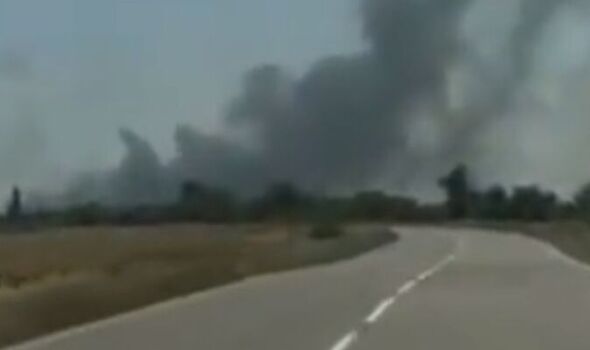 Claims have been made on social media that the fire struck Skadovsk, a port city on the Black Sea in Ukraine’s Kherson region. A Twitter user shared images which appeared to show smoke and helicopters in the air nearby. MilitaryLand.net, a blog focused on the war, tweeted from its account: “Locals report several explosions in the vicinity of occupied Skadovsk, Kherson Oblast.

Fellow Twitter user, Special Kherson Cat, said: “Local residents report a fire near Skadovsk, Kherson region. It’s not known for sure if this was the result of shelling or just a fire due to the summer heat. But Russian helicopters are showing a clear interest to it.”

Express.co.uk has not been able to independently verify the claims.

Reports of the smoke come as British military intelligence said on Saturday Russia’s war in Ukraine is about to enter a new phase.

Defence Intelligence said most fighting is shifting to a nearly 217 mile long front stretching southwest from near Zaporizhzhia to Kherson, parallel to the Dnieper River.