Convicted paedophile and former Christian Brother Ted Bales has pleaded guilty to abusing 19 children in the 1970s and 1980s, bringing to 50 his total number of confirmed victims.

Bales on Friday entered a plea of guilty through his lawyer to 33 charges of indecent assault in Melbourne Magistrates Court, related to 19 victims. The charges represent a series of offences against his victims as prosecutors withdrew dozens of other individual charges. 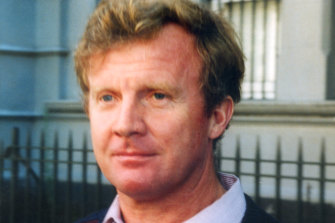 Ted Bales in 1994 when he was known as Edward Dowlan.Credit:Geoff Ampt

Bales, 71, who was formerly known as Edward Dowlan until he changed his surname by deed poll, was a teacher and dormitory supervisor at schools in Melbourne, Ballarat, Geelong and Warrnambool in the 1970s and 1980s, where the attacks took place. He was a Christian Brother until he left the order in 2008.

The charges he pleaded guilty to on Friday relate to offending in Melbourne’s northern suburbs, in Ballarat and in and around Geelong.

Bales was in 1996 jailed for abusing children and then went into prison again – where he remains – after being sentenced in 2015 for abusing a further 20 children, some as young as eight.

His latest admissions will likely mean his jail term will be increased after he fronts a plea hearing in the County Court in January.

He was jailed for five years in 1996 and in 2015 jailed for six years, with a non-parole period of three years. However the Court of Appeal increased his maximum jail term to eight years and five months after prosecutors successfully argued that the original jail term was manifestly inadequate.

Bales did not appear before the court on Friday and is still in prison serving his current sentence. Defence lawyer Andrew Croxford said Bales had provided instructions to enter a guilty plea on the latest charges.

Magistrate Pauline Spencer remanded Bales in custody to face the County Court for a two-day plea hearing starting on January 27.

b, brother, Christian, former, Ted
You may also like: