The former head of the body set up to drive Australia’s economic recovery from COVID-19 has been charged by West Australian police after allegedly breaching strict border rules for flying into the state in a private helicopter from Queensland without approval.

Neville Power was appointed by Prime Minister Scott Morrison as chair of the National COVID-19 Commission Advisory Board in March 2020, but last week was charged with three counts of failing to comply with WA’s border directions after a police investigation. 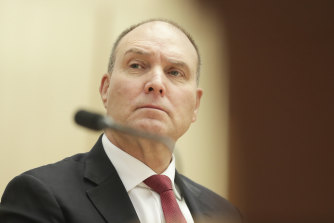 Neville Power has been charged by WA Police over alleged border breaches.Credit:Alex Ellinghausen

Mr Power is an avid aviation enthusiast and current chair of Perth Airport and the Royal Flying Doctors Service.

Police allege he and a 36-year-old Henley Brook man left Queensland in a private helicopter on October 8 and flew to Exmouth on the state’s north west coast without completing a G2G pass – a requirement for anyone entering WA.

They further allege the men stopped to refuel in both Carnarvon and Geraldton before arriving at Jandakot airport in Perth’s southern suburbs on October 9.

Breach investigation team officers interviewed the men on October 20 and they were subsequently charged and will appear in Perth Magistrates Court on November 15.

They were also directed to self-quarantine for 14 days and returned negative COVID-19 test results.

At the time of Mr Power’s trip, WA health authorities deemed Queensland a ‘low risk’ state which means travel is allowed to WA, but the traveller is required to self-quarantine for 14 days.

In a statement to the ASX, Strike Energy said Mr Power would continue to perform his duties as a director of the company.