A former Manus Island security guard says she wants to reconnect with her family and experience happiness again after successfully suing the operators of the detention centre and the Australian government over her exposure to violence in the deadly 2014 riots.

Chandra Osborne is one of at least 20 former guards to have launched legal action in recent years, having argued security contractor G4S and the federal government failed to provide a safe workplace and that the riots over three days in February 2014 left former staffers traumatised and suffering serious mental health problems. 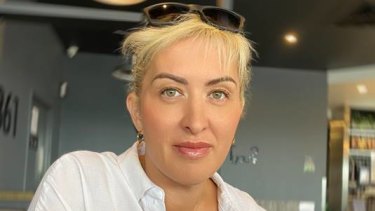 Iranian asylum seeker Reza Berati, 24, was murdered by two PNG detention centre security staff during the prolonged violence, which also included riots by some detainees and PNG nationals outside trying to force their way into the centre.

Osborne’s lawyers argued in the Supreme Court this month that the riots should have been foreseen by G4S and the Commonwealth because asylum seekers had stockpiled makeshift weapons and were angry at the uncertainty over their futures. The court was told the centre was well above capacity, and that G4S failed to address inadequate fencing, lighting and CCTV cameras, and didn’t provide security staff with adequate personal protective equipment, radios or training.

Osborne’s lawyers argued at trial she was exposed to sustained acts of violence and threats while trapped inside the centre for hours after she was sent in by her employer without a radio to gather intelligence. The experience left her with ongoing post-traumatic stress disorder, major depression, anxiety, nightmares and flashbacks. 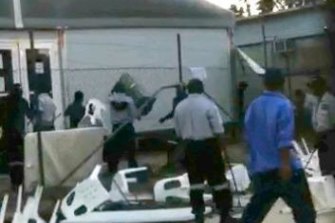 A still image of footage taken during the riots at the Manus Island detention centre in 2014.

The parties cannot disclose the settlement amount, but lawyer Kim Price, from Arnold Thomas & Becker, who acted for Osborne, said she was one of nine former Manus Island guards to have been compensated for a combined sum that ran into the “tens of millions” of dollars.

Another 12 former guards still have cases before the courts.

Osborne, 42, said reliving her ordeal in court was traumatic, but she could now focus on getting medical treatment and reconnecting with her two teenage children.

In a statement to The Age, she said she often didn’t want to leave her home, and on some days had a racing heartbeat and anxiety. She said she couldn’t remember the six-month period after the riots, and hadn’t worked since she left G4S. 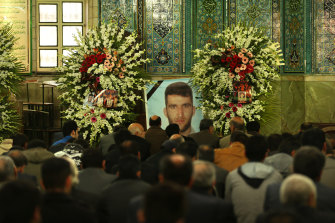 “I want to focus on getting treatment, getting to a stable mental level,” Osborne said.

“I also want to make sure my kids are OK. They have sacrificed so much. For a long time, I’ve been an absent mother.

“I want to really try to get better and make sure my kids get to experience life without having to worry about mum. I want to enjoy life again. I really crave the feeling of joy. That’s something that would mean so much to experience again.

“I just hope that the other guards who follow me in this process don’t have to uncover all the horror and their emotions again. I hope their feelings are considered. None of us should have had to experience these traumas.”

Price said the settlement was an acknowledgement of the “catastrophic and negligent failures” by the Commonwealth and G4S.

“As a consequence of their exposure to the 2014 riots, and subsequent psychiatric injuries, our clients’ current and future employment opportunities have been compromised and have caused significant loss of earnings,” he said.

Before Osborne’s case settled, lawyers for G4S denied the company breached its duty of care and argued it was the Australian and PNG governments that had control of the detention centre’s infrastructure and the size and wellbeing of the detainee population.

Lawyers for the Commonwealth argued early in the trial that G4S was responsible for defusing tensions within the detention centre.

Berati’s parents last year launched civil action against G4S and the government and allege their negligence caused their son’s murder. The two guards who attacked Berati were jailed for 10 years but half of those sentences were suspended.

The Manus Island detention centre was shut in 2017.