At the Kyiv airport, where he arrived on a flight from Warsaw on Monday morning, Poroshenko was greeted by several thousand cheering supporters. Some carried banners reading “We need democracy,” and “Stop repressions.”

From the airport, Poroshenko headed straight to court, which will rule on whether to remand him in custody pending investigation and trial. 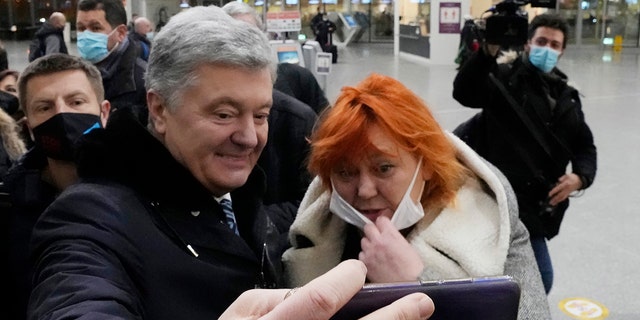 A prosecutor has alleged that Poroshenko, owner of the Roshen confectionery empire and one of Ukraine’s richest businessmen, was involved in the sale of large amounts of coal that helped finance Russian-backed separatists in eastern Ukraine in 2014-15.

Poroshenko’s assets have been frozen as part of its investigation into the allegations of high treason. The former leader of Ukraine faces up to 15 years in prison if convicted.

Poroshenko insists that he is innocent. He accuses his successor, President Volodymyr Zelenskyy, of seeking to discredit him politically to distract from Ukraine’s widespread problems, including economic woes and rising deaths from COVID-19.

The charges are the latest in a string of accusations leveled against Poroshenko since he was defeated by Zelenskyy in 2019. The allegations have generated concerns of undemocratic score-settling in Ukraine and also alarmed Ukraine’s allies. They come as Russia has built up troops along the Ukraine border and the United States has voiced concerns that Russian President Vladimir Putin might be planning an invasion of Ukraine.

Poroshenko was defeated by voters following a corruption scandal and a mixed record on reforms, but he emerged with strong patriotic credentials for his work in rebuilding the Ukrainian army as it fought Russian-backed insurgent fighters in the east.

Zelenskyy says he is waging a fight against oligarchs that is aimed at reducing their influence in Ukraine’s political and economic life. 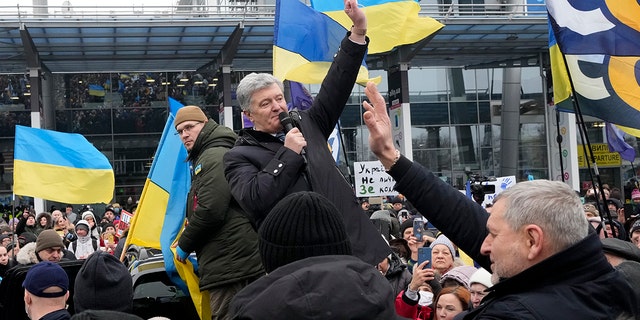 Poroshenko has been outside of Ukraine for weeks, meeting with leaders in Brussels, Berlin and other European capitals.

Outside the Kyiv airport on Monday, the ex-president greeted a large crowd of his supporters and delivered an elaborate speech, urging them to follow him to the courthouse. He called the charges against him “a challenge to all of us.” 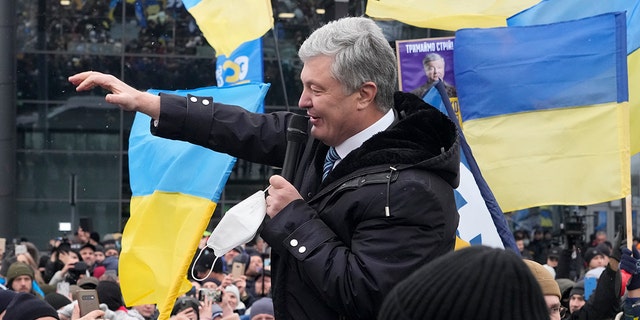 “(The authorities) are setting us back 10 years. We’re here not to defend Poroshenko, we’re here to join forces and defend Ukraine,” Poroshenko said. “United Ukraine is strong, and a strong Ukraine is capable of pushing back (against) Putin.”

His supporters also viewed charges against him as politically motivated. “It is a revenge of the authorities and an attempt by Zelenskyy to eliminate his biggest rival in Ukraine’s politics,” Anton Ivashchenko, 42, told The Associated Press at the airport. “Persecution of Poroshenko sows animosity and discord among those who push for … Ukraine’s closer ties with the West.”